Welcome to the September edition of Chronicles of an Allocator.

Can your ideas change the world? What would Chester V, the main villain of Cloudy with a Chance of Meatballs 2, think of the current state of venture capital today? While we aren’t facing a disaster of “epic portions” and cheeseburgers haven’t fallen from the sky, GMO co-founder Jeremy Grantham has gone on record to say that climate change is one of the biggest crises of our time. Not only does this make for an engaging speech, but Grantham believes that venture capital investments are the solution. In fact, the majority of his $1 billion-plus Grantham Foundation for the Protection of the Environment in allocated to venture capital investments, in attempt to fund ideas that could quite literally save the world.

The future is private. When asked what advice he would give younger people interested in finance on an episode of Invest like the Best, Grantham urged young investors entering the business to pursue a career in venture capital, saying:

“[Venture capital] gives you the same opportunity to use your brains in your research, in your analysis. But it's more opportunity to use your imagination and to mix with people who are trying to change the world for the better. And it is useful. Private equity and regular investing is shuffling shares between one player and another, doesn't change anything. I sell a share, you buy it, who cares? Venture capital is, you're taking new money away from something else and you're putting it into a new idea. You're building a small plant maybe that would not have been built without your money.”

Of course, so much altruism all around does tend to bring out the cynicism (and hilarious side) of social media. Still, the role that new venture projects play on the battlefield of large societal issues (like climate change) could be huge. Combine innovation with a structure that, at least in theory, brings about a longer-term view, and we find several upstarts that could really disrupt the incumbents.

Investors seem to be listening. According to Preqin, global venture capital funds managed over $1.2 trillion as of 2020, increasing threefold from 2015 levels. Not all of the money is constrained to Silicon Valley, either. While growth remains strong in the U.S., the number of deals in Asia have quintupled in number and increased nearly tenfold in size.

How big can your idea get? It seems that venture capital investors are not only funding big ideas, but also funding big deals. In their H1 2021 Venture Monitor Report, Pitchbook and NVCA found that we’ve already exceeded 2020’s deal count and capital raised in just the first half of the calendar year. 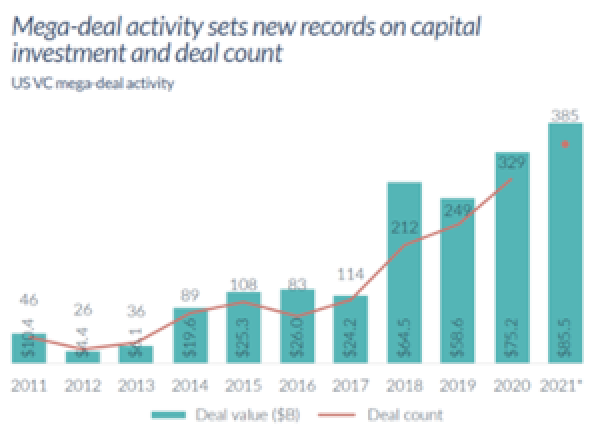 What’s more, according to their analysis, median and average deal sizes have shot up across all stages over the last decade. In earlier stage rounds especially, this may be driven by the fact that startups are more mature and developed when accessing institutional capital. Speaking of institutional capital, not all VC firms have the same success rate, or so said famed venture capitalist Andreesen Horowitz on a recent Bloomberg interview – VC hit rates are much better for top-tier (and often larger) venture firms, where the 10% success rate rule of thumb is more like 50%. A combination of increased availability of capital, investor interest in the asset class, and crossover investor participation (public equity asset managers are getting in on the action) are driving deals to new highs. I suppose you could say the pace at which fundraising has taken off is enough to make a grown man cry. 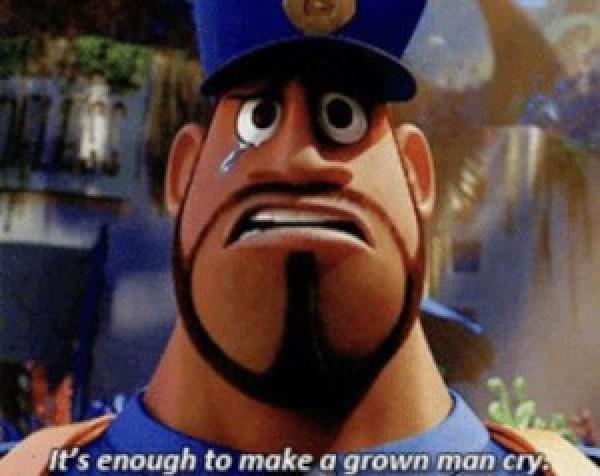 As you can probably guess, this month’s topic is Venture Capital. In this edition, we cover some of the recent trends mentioned above, with a closer look at how these trends are affecting VC ecosystems in Europe and Asia.

I would also be remiss if I didn’t highlight our upcoming series on the Fundamentals of Venture Capital, starting September 23. We’ll be covering the life cycle and performance of venture capital funds and presenting a framework for the investment process, from the development of portfolio objectives, through liquidity management and manager selection. Preqin will also join us to share recent data on industry AUM, dry powder, fundraising, deals, and investor appetite.

When VC funding goes mega
Later-stage (Series D+) VC pre-money valuations jumped beyond the “stratospheric mark of $1 billion” in the second quarter of 2021, with a handful of venture-backed companies in Europe, USA, and Asia securing mega funding rounds well above that threshold. Globally, according to KPMG’s latest quarterly report, Swedish auto cleantech company Northvolt was the most mega of them all, with a Series E of $2.75B, supported largely by institutional and PE investors. Others surpassing the $1B mark were USA’s Waymo ($2.5B), Indonesia’s J&T Express ($2B), India’s BYJU ($1.55B), Brazil’s Nubank ($1.5B), China’s Horizon Robotics ($1.5B), and USA’s SpaceX ($1.2B), which demonstrates the appetite for these mega VC funding rounds across industries, geographies, and investor types.
Read more

An impossible game of catch up

VC money is known for chasing some of our society’s greatest challenges, so it’s not surprising that cybersecurity founders now find themselves flush with VC cash. The challenge they're addressing, cybercrime, is growing exponentially. Indeed, 2020 saw more data breaches than the last 15 years combined. If it were measured as a country, cybercrime would be the world’s third-largest economy after the U.S. and China, and at its expected growth rate, cybercrime will be more profitable than the global trade of all major illegal drugs combined. Yet, despite huge investment, startups in the space haven’t yet been able to offer sufficient solutions to what’s become “an impossible game of catch up.” The same is reportedly true in a growing subsector of the cybersecurity space: cryptosecurity. Due to technological barriers to entry, we may see a gap in the number of promising cryptosecurity startups, despite the record-setting investment in the space and a fast-growing need to secure more and more digital assets and transactions. 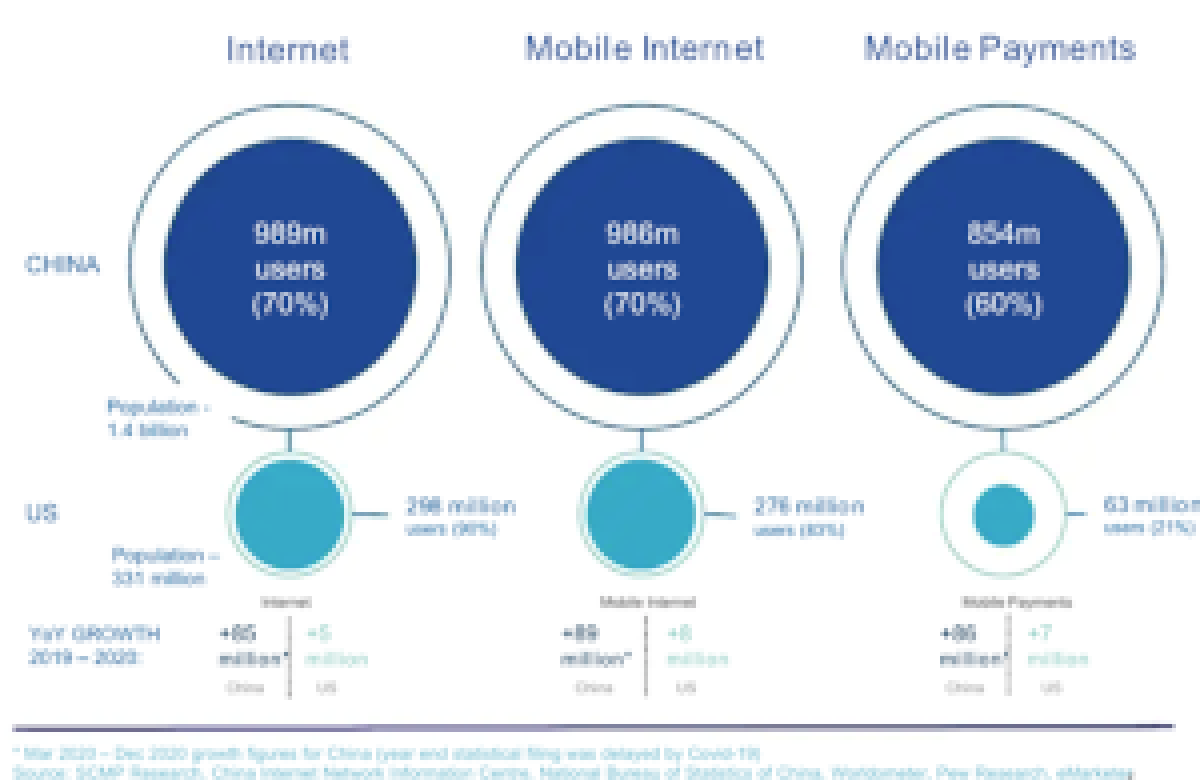 Who dominates Chinese VC?
Keeping up with global VC trends, China is also on pace to reach record-setting VC investment this year, with a greater share of investment in Series A and B funding. Indeed, according to a report by Whitestar Capital, the country with the world’s largest internet mobile internet and e-commerce markets is demonstrating the fundamentals to grow VC investment even further with its expanding middle class and mobile-first consumers. Moving forward, China’s startup ecosystem will continue to depend upon leading “super apps” like Baidu, Alibaba and Tencent, along with the country’s still maturing VC funds.
Read more

Resilience of VC in Southeast Asia

Though 2020 saw a slowdown in the number of VC deals in Southeast Asia due to COVID-19, recent reports note the resilience of the region’s startup market and predict a record number of exits will happen in the region over the next couple of years, mostly thanks to factors like a maturing ecosystem, a rising interest of secondary buyers, and the emergence of SPACs. Golden Gate Ventures predicts a total of 468 startup exits will happen in the region between 2020 and 2022. The report also highlights that fintech companies in the region especially are seeing an influx of new later-stage capital. According to another report by Singapore Venture Capital and Private Equity Association (SVCA), a trend toward larger deal sizes across the region will “give rise to greater support for larger and later stage financing” as the region’s VC ecosystem continues to mature. 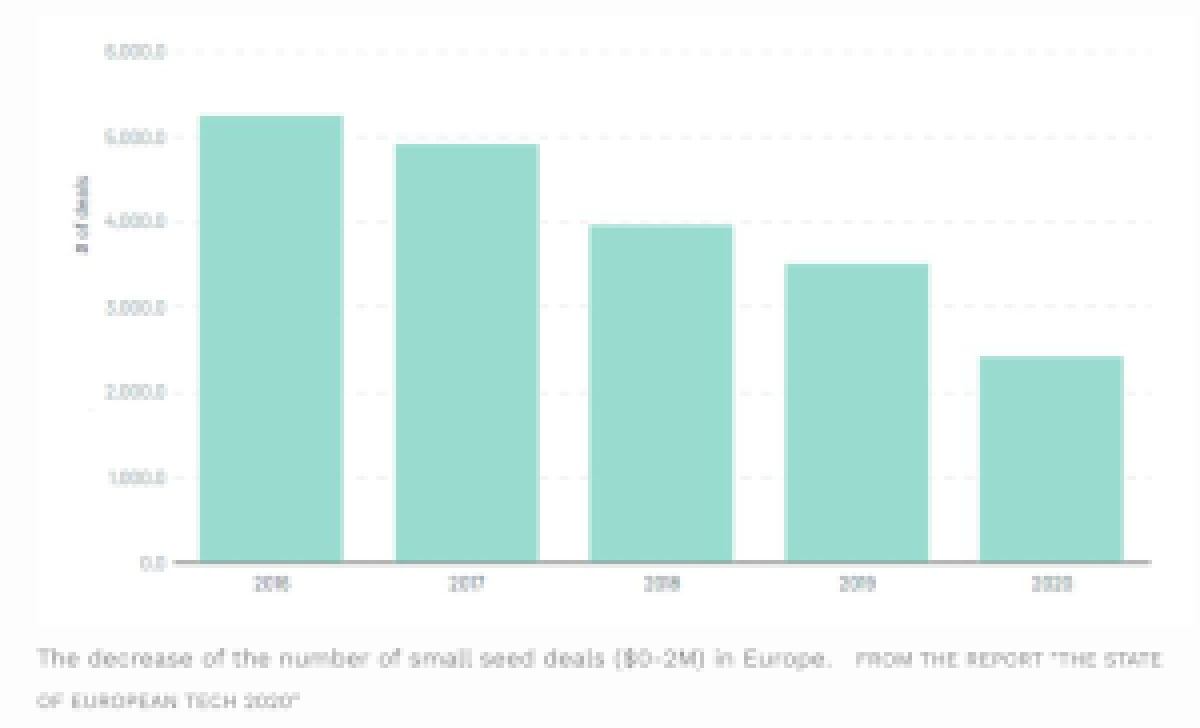 Europe’s falling angels
In line with global trends, Europe’s VC market is setting record highs in 2021 as new types of LPs are allocating to venture capital and as more skilled VC funds emerge to fund bigger, later-stage rounds. This is great news for already backed European companies that want to scale up. The problem, as a recent OpEd by Melinda Elmborg points out, is that we’re now seeing a decline in pre-seed funding by angel investors across the continent. Elmborg says that many of those who had been successful angel investors in years past scaled up alongside the companies they backed, starting their own funds that eventually focused on later-stage opportunities. And now, not enough angel investors are taking their place. What this means is that it’s potentially “harder than ever to get a foot in the door of the European venture capital market,” a trend that could have outsized impact on first-time founders and minorities.
Read more
The new growth mantra for SE Asian startups
Venture debt emerged as a financing model for early-stage tech companies in Silicon Valley in the 1970s and has since become established in other markets like Europe, Israel, and India. Yet, in Southeast Asia, venture debt has only recently become a mainstream financing option for high-growth technology companies that want to prevent unnecessary dilution. A recent report by PWC estimates the growth of the potential addressable venture debt in the region at between $490 million and $980 million annually, as venture debt will likely follow close behind the record-setting fundraising anticipated this year and beyond.
Read more
How does control change risk premia in VC?
A recent article featured in CAIA’s new Portfolio for the Future blog compares the relative risk between SE Asian venture capital and public equities and suggests a framework to understand how different investors might consider risk depending on the diversification of their portfolios and their level of control. Using historical data of Southeast Asia VC deals from 2011 to 2021, the authors suggest that investors who hold a minority position in a Southeast Asian company should add a premium of 22.5%, while control investors should add a premium of 12.1% to public equities’ expected returns.
Read more
Quick Reads: