Decentralized Finance (DeFi) is just a more efficient way to barter with one another. Once upon a time, we used to trade cows for chickens. Today we trade digital cartoon images of rocks for deluxe vinyl records or McRib NFTs.

How did we get here? Well, despite impressive technological advancements, the way we interact with our money hasn’t really changed all that much in almost a century. Two-day stock settlements, 3% credit card transaction fees, two-day money transfers, and low savings rates may seem archaic at a time when the internet gives us access to anything we want: cheaply, and in a few seconds. It’s not all (digital) rainbows and sunshine, however – according to experts, like Dr. Campbell Harvey, we’re still in the very early stages of this thing. So what are the current issues?

Theoretically, DeFi solves a big problem (the inefficiencies of the current financial system) using one of the most innovative technological advancements in decades: the internet. Driven by competition, one of the core tenants of DeFi is the pace of innovation – DeFi and its protocols are in constant competition for the supposed benefit of the end user.

How hard is it for a bank to change something as simple as its user interface, let alone how they do business? The current business model is often focused on supporting the legacy firm (equivalent to the original code) – improvements would be considered patches to software. Conversely, start-ups in DeFi have little to lose and it’s much easier to innovate, not only suggesting the incumbents have limited and finite time horizons, but that the current system brings a lot of risk from an investment standpoint.

Regulatory uncertainty remains one of the biggest hurdles for the digital asset world, and the regulatory gap between traditional and non-traditional finance is extremely wide. In fact, lack of regulation has likely been one of the driving forces behind DeFi’s evolution and innovation. Regulators face a talent retention problem, preventing them from having in-house expertise to understand what they’re regulating and forcing them to pick battles where they can. Exhibit A is the recent altercation between the SEC and Coinbase, one of the largest centralized players in cryptocurrencies.

A report from Cambridge University in February 2021 suggested that Bitcoin mining uses more energy than the whole country of Argentina and, if it were a country, it would be a top 30 energy user worldwide. Around that time, China began to crack down on crypto mining activity (before outlawing it entirely) due to its reliance on coal-generated electricity. Bitcoin, by far the largest cryptocurrency, utilizes a Proof of Work verification model that requires a lot of computing power and, as a result, energy production. As mining has increased, the marginal cost of minting a new coin has also increased. To combat Bitcoin’s negative impact on climate change, some have discussed somehow levying a carbon tax on transactions. This may only be relevant for large currencies like Bitcoin, since most protocols have either adopted or are transitioning to a Proof of Stake model (see: Ethereum in 2022), which is more sustainable and environmentally friendly.

The Chinese and U.S. governments have already taken a hard look at the viability of issuing their own stablecoins. While this wouldn’t exactly qualify as “decentralized,” the implications for financial services are still massive. Imagine a central bank that can institute new monetary policy instantaneously, or a government that can provide targeted stimulus (or taxation) – some concepts described in an earlier episode of Capital Allocators.

Whereas “traditional DeFi” relies on anonymity, a government centralized ledger would likely remove some anonymity and allow insight into all users’ transactions. At the same time, cash would no longer be/need to be in circulation, which means the potential for government overreach could heighten.

To Not Be Long is to Be Short

Even if you’re not a believer (or investor) in cryptocurrency, it behooves all of us to understand where we might be exposed to potential disrupted incumbents. Whether it’s traditional banking to new innovative FinTech platforms, the underlying technology of the digital ledger and how it will alter the way we do business or process transactions is worth considering.

If you’re not long, you’re short. That may be the right move, but make sure you’re doing it on purpose.

Welcome to the November edition of Chronicles of an Allocator. As you can see, this month’s topic covers the innovative world of decentralized finance (DeFi). We’ve curated a short list of content pieces that we believe provide relevant and current information on the space, regardless of where you are in your journey. A special shout out to our CAIA Members who contributed to this newsletter. If you are interested in featuring content you find interesting in a future edition of Chronicles, give us a shout at content@caia.org.

Book: DeFi and the Future of Finance

If you’re interested in learning more about DeFi and its applications, you can now buy the latest book, authored by Cam Harvey, Ashwin Ramachandran, and Joey Santoro. A quick read, the book starts with a history of finance, but quickly moves into innovative topics like DeFi infrastructure, issues it solves, and the risks associated with it. Check it out, and read a recent blogpost that describes some of the biggest takeaways from it.

Like traditional finance, one of the biggest hurdles of DeFi, cryptocurrencies, and digital assets is learning the vocabulary. While there are many keywords to know, here is a short list of some of the most common ones:

Read more
What are the major token types?

Even the word token has different meanings in DeFi. Currently, there are five types: transactional tokens, governance tokens, utility tokens, liquidity provider tokens, and non-fungible tokens (NFTs). We’ve heard a lot about NFTs lately, but different tokens bring different value propositions. For example, holders of governance tokens are similar to being shareholders in an equity – they have the ability to influence the direction of a project or decentralized company.

The financial services industry doesn’t exactly have a reputation for technological innovation, which has historically allowed for technology companies to control the conversation. But, as the writers at John Street Capital argue, we’re at the precipice of revolutionizing the entire system itself. FinTech 1.0 digitized legacy financial transactions and processes (think PayPal, Square, or SoFi) and FinTech 2.0 further embedded these services into a comprehensive customer experience (bundling investing, checking, and savings), but both were focused on improving centralized finance (CeFi). FinTech 3.0 is a complete re-architecture of the entire financial system and we’re just getting started. 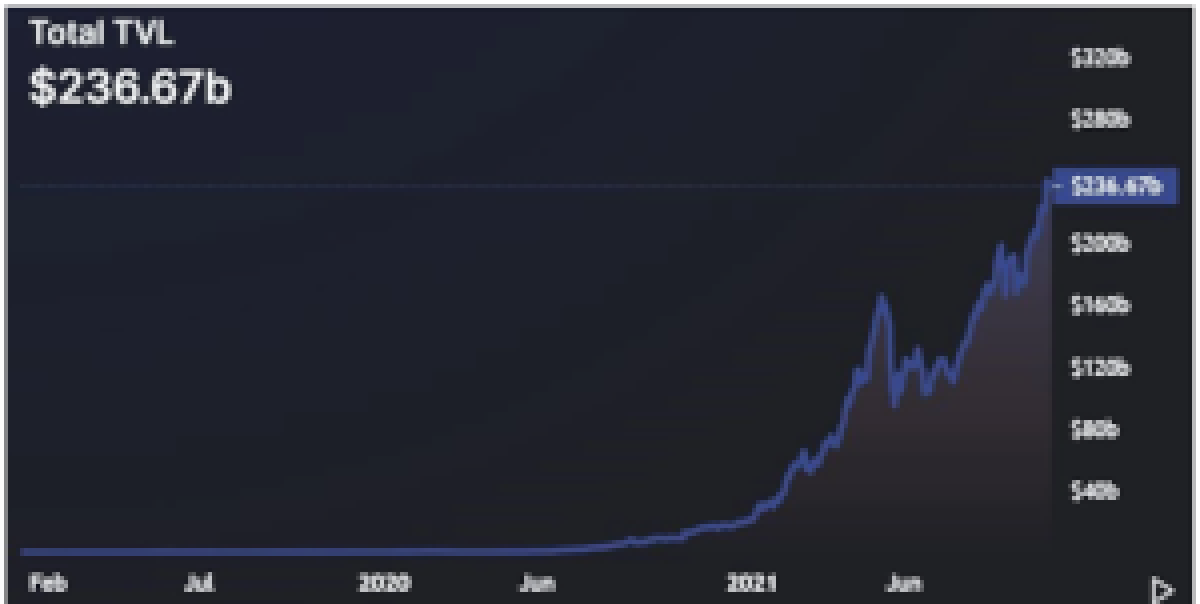 How much money is in this stuff? 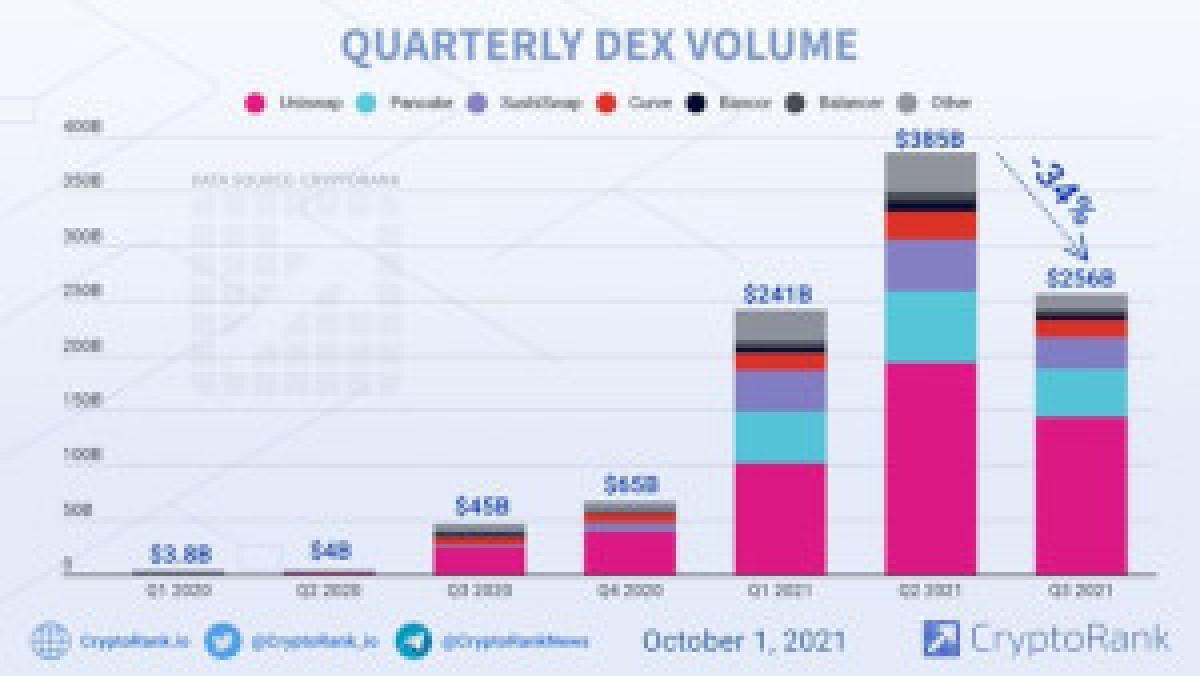 There was a parabolic rise in trading volumes on decentralized exchange protocols, the largest of which is Uniswap, in 2020. However, so far in 2021, decentralized exchanges have experienced a change in trend and a decline in volumes by almost 34% in the third quarter. On the topic of revolution vs. evolution, there may be some hurdles to completely overthrowing incumbents:

“All in all, I would expect DeFi to play a bigger role in certain segments in the future, but not to replace the traditional centralized players.” – Nikolay Zvezdin, CAIA

Centralized exchanges are still comfortable to many investors, and DEXes must admittedly address wide-spread issues such as front running, impermanent loss, bugs, and vampire attacks, as well as many others, that may seem like no-brainers on a centralized exchange.

“The growth of DeFi as a topic has been undeniable in 2021, paving a distinct and compelling path forward for the ‘Future of Finance.’ With a myriad of news and updates coming to us everyday, staying up-to-date has become indispensable.” – Rohit Yadav, CAIA

There’s been a bit of a delicate balance between fostering innovation in DeFi, which has led the conversation for many years, and the need for regulation and protection for the end consumer. A recent panel discussion hosted by the World Economic Forum tackled this issue, with panelists from across the stakeholder base.

Perhaps one of the best ways to understand the applications of DeFi is to examine some of the most popular protocols associated with it. If you’re interested in learning more about individual tokens, check out this list from CoinMarketCap, which shows the top DeFi tokens by market capitalization.