Rothstein Kass, an auditing and professional services firm with offices in California, Colorado, Massachusetts, New Jersey, New York, Texas and the Caymans, has released the results of its second annual survey of women in the alternative investment industry. The report, authored by Meredith Jones with ten contributors, notes a consistent pattern since at least 2008 of superior performance by hedge fund firms owned or managed by women. 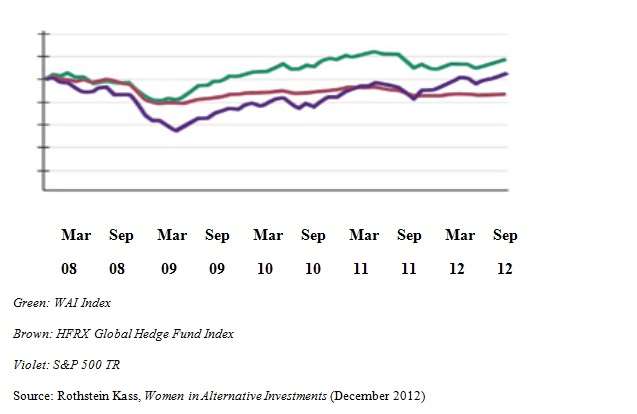 In this crisis-ridden half decade, the WAI tracked close to the HFRX for the first year and a half, and then diverged to the upside. The HFRX fell below the S&P over the course of 2011. As Jones writes, “There have been a number of studies that show women investors to be more risk averse, and therefore potentially able to escape market downturns or volatility.” Thus, she considers the outperformance numbers “not surprising.” The idea will hardly be surprising to readers of Portfolio for the Future, either. A year and a half ago our Hamlin Lovell summarized a study by research psychologists J.M. Coates and J. Herbert, “Endogenous steroids and financial risk taking on a London trading floor,” that suggests much the same. On the other hand it must be said that the psychology of traders (especially that of the traders who served as guinea pigs for Coates and Herbert, and who were paid purely on their profits) may not be fungible with the psychology of fund managers. Whatever the cause of the divergence of the above colored lines, they do diverge.

RFPs and Allocations So: if you are managing the portfolio of an institution that invests in hedge funds, you might want to ensure that some sizeable portion of the HF-allocated assets go to funds managed by such women-led firms. In this, you will have company. The Maryland State Retirement and Pension System awarded an allocation of $44 million to a woman-owned, single-manager hedge fund this year. The Connecticut Horizon Fund issued a Request for Proposals for a diversity fund of hedge funds. The Laborers’ & Retirement Board Employees’ Annuity and Benefit Fund of Chicago issued a $20 million RFP of its own, for a woman-owned fund of hedge funds. This is still a “relatively nascent movement,” says the report, but such numbers “can start to add up quickly.” Yet industry events continue to have a “boys’ club” look to them, because there remains a shortage of women in the top posts of firms in the field. Rothstein Kass surveyed “a diverse group of industry participants” including those who work at hedge fund, venture capital, and private equity firms, and asked about the role women play in their respective firms. As the below pie graph indicates, well over a third of the respondents indicated there were no women on the investment committee. 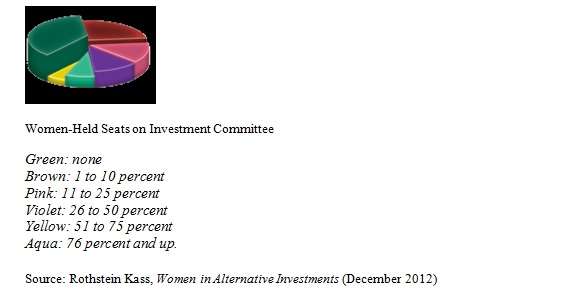 The Tipping Point So, although there is a demand for women-owned or managed firms coming from institutional investors, and this demand is a rational one from the point of view of recent returns, the number of women who are in a position to supply the demanded services remains low. Why so? The most economical explanation is simply that one gets into that position through the work of a supportive network, and that women are still building that network in the midst of the “boy’s club.” A clear majority of the respondents (59 percent) said that they believe there will be more women in the alternatives industry in 2013 and beyond. A large plurality (45 percent) either agrees or strongly agrees with the related proposition “there will be more launches of women-owned or women-controlled alternative investment funds in 2013 and beyond.” Only 25 percent either disagree or strongly disagree with that, and the others are uncertain. This optimism suggests that women in the industry believe that a tipping point approaches, in which the mentoring, networking, and general shift in attitudes will allow the number of women managing portfolios to rise to a level that meets the demand. After all, as Malcolm Gladwell said in the appropriately named book, The Tipping Point , there does come a moment in many developments when all is in readiness and, then, “everything can change all at once.”