The Conference Board of Canada, after a survey of corporate community investment activity in that country, reports that Canadian firms have maintained and sometimes increased their community investment budgets over the last five years, despite the difficulties of the economic climate.

A Range of Resources

The report draws on a definition of “community investment” as “the donation of corporate profits or resources to non-profit organizations or other charitable initiatives.” That phrase, “or resources,” allows for a wide range of ways in which such an investment might be made. A corporation can of course simply give money to a civic, community, or health care organization.  Or it can sponsor events or take up the marketing costs of such organizations. Or it can leave cash out of the picture, contributing in-kind goods or services. Or, finally, a corporation can support its employees who volunteer their time to such organizations.

On that last point: the survey shows that corporate employees volunteered 1 million hours to community causers in 2011, and that one-fifth of those hours were during regular business hours. “This is often a reflection of the company making time available (sometimes paid time) to their employees to volunteer,” the report says.

One hundred eighty corporations completed the survey focused on their giving in 2011. In aggregate, the respondents made contributions of $710 million that year. 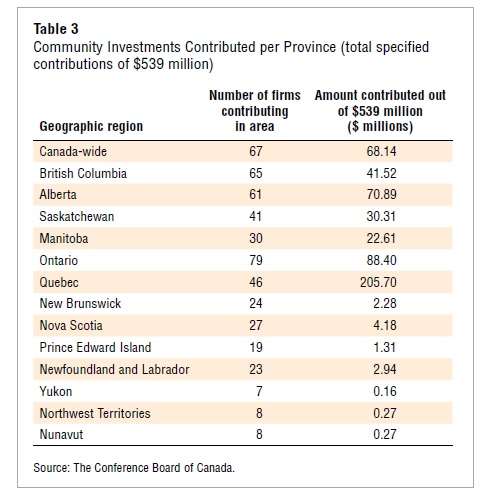 One inference the CBC draws from the survey responses is that previous estimates of the extent of such given have been low. In February 2012, Paul Reed, a statistician and professor at Carleton University, estimated corporate community investment at about $2 billion a year.  Since just these respondents gave $710 million, and since cash grants are “only a part of the full range of contributions to the community that corporations make,” the CBC thinks Reed’s number is too small.

Another inference that the material rather strongly suggests is that Canadian corporations take the word “community” in the phrase “community investment” seriously. Their giving stays at home, both in international terms and in intra-national terms. As the chart above indicates, only 38 of the 180 respondent companies contributed money or donations internationally. Only 50 contributed money to Canadian corporations that themselves operate across national borders.

The same inference holds if one looks not at number of donors but at the amount of money donated. Only five percent of the total value of the contributions of companies in the survey had an international destination.

The survey invited respondents to indicate the specific Canadian provinces/territories to which they contributed.  Unsurprisingly, perhaps, the more populous portions of Canadia received the most such assistance, with 54 percent of community investments going either to Quebec or to Ontario. Another 13 percent was described as “Canada-wide. “ The percentages that go to the Northwest Territories, Yukon, or Nunavut are negligible.

Here, too, the meaning of “community” as home-based activity comes to the fore. The report says, “Community investments by corporations are often made in the company’s home province….Almost 39 [percent] of respondent firms … made community investments in just one province.” 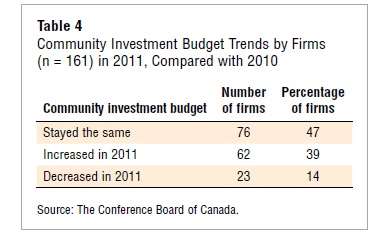 One optimistic finding of the survey is that community investment is to a significant extent recession proof. Eighty-six percent of the respondents either maintained or increased their contributions in 2011.

Neither public policy research organizations nor religious/faith-based organizations receive a lot of money from corporate community investment programs. Only 8 of the responding companies gave to the latter sort of organization, and only 20 percent to the former. This is despite the fact that the faith-based sector is, as the CBC observes, “one of the largest charitable sectors in Canada.”