PrevInvest: Fishing for Yield in a World of Liquidity

A recent publication on hedge fund strategies posits on one hand that continuous monetary easing actions by central bankers will avoid any sharp market corrections through the remainder of 2013. On the other hand, the same publication does not anticipate “any big rotation from bonds into equities.”

There will be no very dramatic recovery in the developed countries. In the U.S., for example, though PrevInvest – the market intelligence group offering this report – sees a recovery underway, it notes the movement is at a “gentle pace, far below that observed in previous recovery phases.”

Some of the familiar fishing holes contain only tires and old boots and other visual clichés now, so hedge funds and seekers of yield generally, will have to go fishing in unaccustomed places

PrevInvest focuses too on the consequences of the race to the bottom among the world’s industrialized nations, and the way this has created a lot of sloshing-around of liquidity looking for profitable channels. That is, in some sense, the point of such policies, but it is also a trap for the unwary.

Shorting the Yen: But Not So Much

Consider the yen, and potential hedge fund strategies based on its movements. Through much of April, large speculators were shorting the yen. But in the final two weeks of the month they changed their view. If you pull out and look at the bigger picture, as the graph below does, you can see that developments thus far in 2013 have worked within a much smaller range than those of the yen trades last year or in previous years going back to the start of the global financial crisis in 2007.

The graph below describes large speculators’ net positions in Yen FX derivatives since the end of 2005. 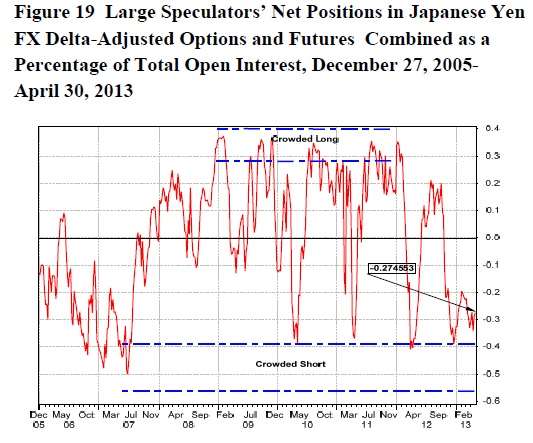 You can see that the trade was well into “crowded long” territory in the middle of 2007, but quickly moved out of there. In the start of 2010 and continuing into the third quarter of last year there took place a series of very dramatic reversals, with the trade moving rapidly back and forth between “crowded long” and “crowded short” among large speculators.

That has changed in recent months only because late last year the Japanese central bank became a good deal more open about its intentions, and those intentions are straightforwardly inflationary. There have been no swings into long territory (much less “crowded long”) since.

But let’s return to recent weeks.  In early April the movement was downward, toward a crowded short, but by the end of the month – the extreme rightward edge of the above graph – there was some snap-back. This may continue “as a phase of technical consolidation takes place amid longer term Yen depreciation,” PrevInvest suggests.

Switzerland and the Cap

Switzerland, like Japan, is a country that has worked hard of late to become more predictable.  Although the EUR/USD exchange rate from 2007 into 2013 looks extremely volatile, the EUR/CHF exchange rate through the same period offers a rather gentle downward slope. As you can see in the graph below, except for a sharp V-shape in the middle of 2011, there is very little drama in it. 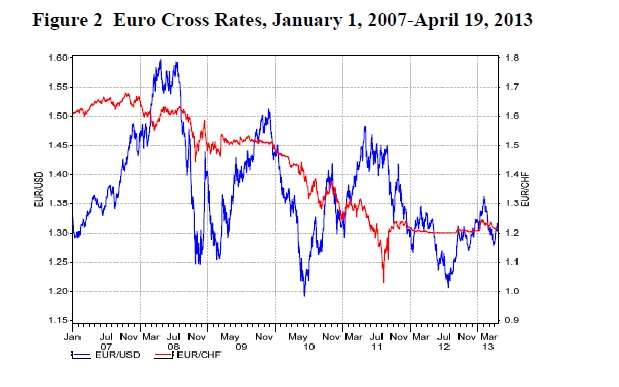 This is because Switzerland’s central bank has worked quite assiduously to keep that line a boring one. Given the country’s reputation as a safe haven, the Swiss National Bank sees a danger that the Swiss franc will become dangerously strong and a real handicap for the country’s exporters.  So the SNB announced a cap last spring of 1.20 francs to €1 and it declared its willingness to buy foreign currency as needed to preserve that ratio.

Thus, in the graph above the red line flattens out at the end of 2011 right at the announced cap. You see that the franc moves horizontally until the beginning of 2013, when there is a tick upward in the strength of the euro, so that between January 17 and early February, one euro could buy you 1.24 francs.  The rate has since traded in a range between the 1.20 cap and 1.25.

It is now (May 14) at the very top of that range and some people suspect it is ready for a break-out in the direction to which the Swiss authorities do not object.  If that happens, near-future charts of the EUR/CHF cross-rate won’t seem so boring.

Meanwhile, the race to the bottom in currency values and concomitantly in interest rates in the industrialized nations is fueling investor interest in the bonds of emerging nations.  PrevInvest cautions that this has reached a level it calls “euphoria.” At the end of April, Rwanda offered its 10-year bonds at a 6.875 interest rate. It offered US$400 million of these bonds, and the issuance was abundantly oversubscribed.

Likewise, Panama issued a 40-year bond recently with a 4.3% coupon, though Panama’s S&P rating is just BBB, “seven notches below that of the U.S.” as the May report reminds us.

What about Asia? The good news is the economies there “have improved the solidity of their financial systems since the 1997 crisis and accumulated foreign reserves as protection against a reversal of capital flows.”

But there is plenty of bad news. For example, some of the region’s housing, equity, and credit markets look bubbly. Also, bank tier 1 capital ratios are below the same ratios in the more developed countries or in Latin America.

You can of course find bright spots by looking at this vast region on a country-by-country basis.  Philippine equities, for example, have only recently (in March) received their first investment grade rating from Fitch. Moody’s has called the Philippines “a rising star … poised to record one of the fasted growth rates in the world.”