The independent data provider Eurekahedge tells us in its latest report that European and North American oriented hedge funds both lost money in July. In the case of the North American managers, as the graph here shows, that was a reversal of a positive showing in June: for Europe, the fall was more severe and came after a flat June.

The nearly 1% decline in the Eurekahedge European Hedge Fund Index comes as a consequence, the provider says, of “persistently weak inflation, concerns over Portugal’s banking sector, and a fresh round of sanctions against Russia.”

A Few Words on Portugal

Back in May, a harshly worded report from the Bank of Portugal put an important banking group, Banco Espirito Santo, under pressure. In mid-July, after lousy first half numbers, Ricardo Salgado resigned as the CEO of BES. He was soon arrested. All this was especially troubling because BES, and Salgado, had emerged from an earlier round of Portuguese-banking crisis with a roseate smell, coming through that crisis without drawing upon taxpayers’ money, in marked contrast to their peer/competitors. Two years later, their smell is now of a different sort.

The second best performance by region comes from Latin American mandated managers (up 0.73%). Losses arising out of Argentina’s latest bond default, arising in turn out of that country’s run of ill success in the U.S. courts of late, only somewhat mitigated gains from strong showings in Brazilian equity.

Looking at the regions again, this time on a year-to-date basis, the results through July are as follows: 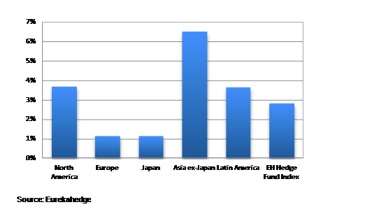 Here, again, Asia ex-Japan leads the table, at 6.5%. North American hedge funds are a rather distant second at 3.7% and Latin America’s results are nipping at the heels of the northern neighbors, at 3.63%.

Japan and Europe can console themselves only that at the least they are still in the positive numbers YtD, with close to 1.15% in each case.

Investor allocations for 2014 have reached $70.9 billion despite what Eurekahedge calls the “muted hedge fund returns.”

European hedge funds are attracting money -- $33.4 billion YtD for 2014, up from $29.4 billion over the same months in 2013. Indeed, in the report’s words, ”Europe remains the only investment mandate to have consistently recorded positive net asset flows over the last 19 months, a sign of the growing investor confidence in the region. Total assets in European hedge funds now stand at U$492.9 billion, having recently surpassed their October 2007 historical high of US$473 billion.” 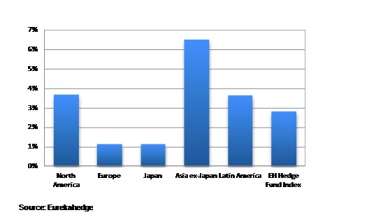 Investors are more attracted to some strategies than they are to others, and the most beguiling strategies of late have been: long/short equity, fixed income, and multis. CTA/managed futures aren’t attractive at all. One might go so far as to say they are repulsive just now. That category has lost net asset outflows of $11.5 billion YtD.

Eurekahedge included in its report a special feature about activist hedge funds. Over the last 7 ½ years, activists have outperformed the industry average. The average monthly positive return is 2.15%, which is 78 basis points above the average. They have done this, moreover, despite steep losses in both 2008 and 2011.

Yet activism is a risky strategy, with an annualized standard deviation of 10.19%. That is nearly twice the corresponding figure for the industry as a whole.

In the period since 2012, activist funds have attracted net capital flows of $23.7 billion. This has also been a good period for performance-based gains for such funds.

“For the moment,” Eurekahedge observes, “investors continue to pile their cash into activist funds hoping to get a piece of the action as global M&A volumes continue to rise.”