The Building of an Infrastructure for Renewables: A Report

A new Preqin report discusses the rate of private fund investment in the infrastructure associated with renewable energy. [‘Infrastructure’ here refers especially to the generation of electricity in commercially significant amounts by unconventional means.]

This report serves as a reminder that there is a downside to low crude oil prices. In mid-2012, after getting as high as $125 and as low as $90 within a short period, crude oil prices settled in to a narrow trading range right around $110. This summer, prices broke out of that narrow range, on the downside. This is not the most propitious possible environment for various renewables-related speculations.

The bottom line is that the amount of capital that renewable infrastructure funds have attracted in recent years has remained at “relatively low levels” indicating that investors remain cautious about the subject matter.

In 2012, [as the crude price was settling in to $110 and low vol,] the renewables’ infrastructure space reached an aggregate estimated deal value of $132 billion. In 2013, that fell to $95 billion. It now seems unlikely that 2014 will match last year. Aggregate deal value in 2014 through September was just $63 billion.

This conclusion is somewhat softened by two others. First, “the number of renewable energy transactions completed has increased every year since 2009.” Second, the nature of the investors in this space is changing. Fund managers are no longer alone in the field; they’ve been joined by “institutional and strategic investors placing capital directly in assets.”

But if what we’re after is a sense of where the market is headed, rather than simply where it is, then the breakdown of the numbers may be key. The graph below, an adaptation of the report’s Figure 12, breaks down the numbers of deals completed between 2008 and 2014 (as of October 6th) by project stage. To review the jargon: greenfield projects involve assets yet to be constructed. Brownfield projects work with established assets that require improvement. A “secondary stage” closing requires neither ground breaking nor structural improvements.

The report explains the focus on greenfield deals in a very straightforward way: the fields still are green.  Or sea green. There is a dearth of “established, operational assets in the renewable energy sector,” so there isn’t a lot to restructure yet.

Indeed, the imbalance in favor of the greenfields is starker in the most recent year under consideration. In 2014 to date eight of the top 10 renewable energy deals were undertaken in greenfield assets. 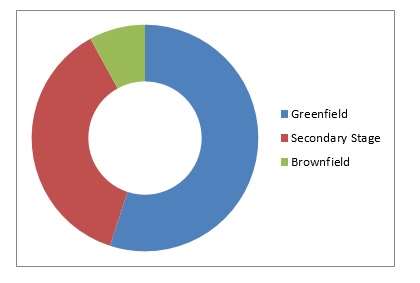 The largest renewable energy project completed in the first three quarters of 2014 was the UK’s approval of the Rampion Offshore Wind Farm, an installation that will if completed according to plan consist of 175 turbines installed about 13 to 20 kilometers from the Sussex coast.

Looking at the transactions by industry, as in the chart below (adapted from Preqin’s Fig. 10) the authors find that solar and wind power dominate. Others (notably geothermal, which is not even visible on this graph in 2011) look to remain niche markets. 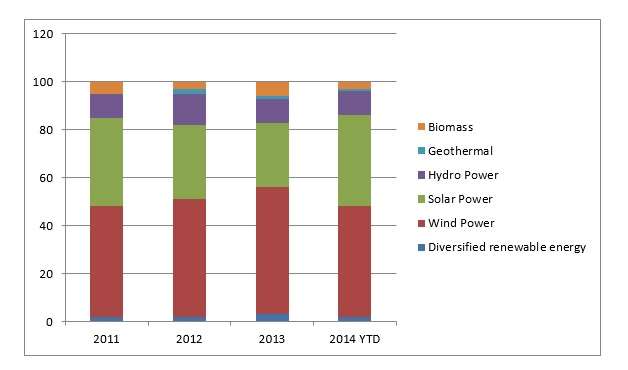 In 2013, “diversified” accounted for 3% of the total. Wind power alone accounted for more than half (53%), solar power for another 27%. This leaves only 17% for the other three categories.

In 2014 thus far, diversified has fallen back to 2%. Wind power and solar power are still dominant, although between the two of them the balance has shifted slightly toward solar. The final three share an even smaller slice than before, just 14% now.

Of the top ten deals that have closed thus far in 2014, six involve wind power, three solar. The remaining project among those ten is a hydro power plant in which both the Abu Dhabi Water & Electricity Authority and GDF Suez have invested.

The good thing about infrastructure is: it sticks around once built. The brown fields don’t become green again. That means that although the process of the creation of the necessary infrastructure for renewables can become painstakingly slow, it won’t go backward. And if you believe that the western economies need alternatives, whatever may be the changing whims of the Saudi monarchy about the price of their crude, then you will consider this good news indeed, even if it is better news for a medium range than for short range consideration.

If you are considering investment in the area, on the other hand, understand that patience will be a necessary virtue.