Wars and Failed Mergers Make for a Tricky October

The data provider and analyst Eurekahedge, in its latest report, says that hedge funds posted negative returns in both September and October. Wars, elections, oil prices, and a change in U.S. tax policy all figure into the reasons why.

The Eurekahedge Hedge Fund Index is down 0.24% in October, although still up 3.47% year to date.

Looking at the industry by region, Eastern Europe and Russia had the worst October (-2.26%). The reason for that isn’t difficult to grasp: war and the rumor of war. On October 1st, after all, both a school and a bus station in Donetsk took artillery hits, and 12 people died.On October 10, a qualifying match between Ukraine and Belarus in Minsk was rather rudely interrupted for the arrest of about 100 fans chanting an anti-Putin slogan. This is hardly an environment beloved by investors.

The Asia ex-Japan index did best (up 0.55%). Managers there report gains from their exposure to China’s property developers. China A-share investing funds scored their sixth straight month of positive returns and are now up 9.9% YTD through October.

[Parenthetically, there’s much to be said for the A-share’s as an investing option. They give investors exposure to China’s consumer names, so if you believe that consumed-in-China, rather than made-in-China, is the next Big Trend, and you want to be ahead of that curve, you might make use of this asset.]

Emerging markets were down for the month, in large part due to the political success of Brazil’s president Dilma Rousseff.

The Eurekahedge analysis characterizes October as having been “a roller coaster ride for the financial markets, with volatility rising sharply during the month as the CBOE VIX Index reached 26.2 at its peak, while yields on 10-year treasuries briefly fell below 2%.”

There was a good deal of positive economic news in the second half of the month, though, including corporate earnings reports and gross domestic product numbers.

The Federal Reserve ended its quantitative-easing program, but as Eurekahedge observes, “central banks elsewhere remain fully committed to tackling deflation.” Indeed, they do so with the Fed chair’s encouragement. 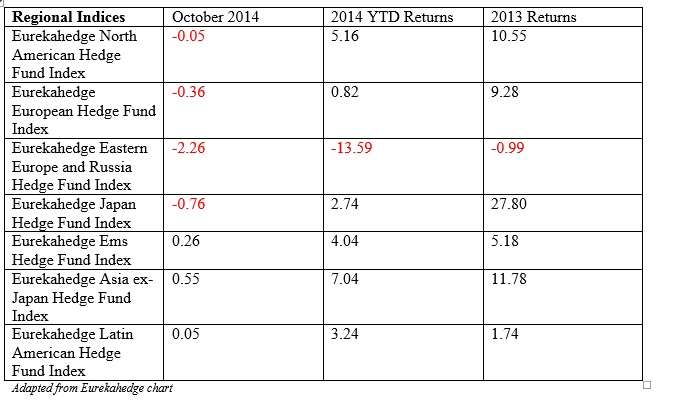 Only two of the strategy-specific indices were in the black for October: CTA/Managed Futures 0.26 up, and Fixed Income 0.10. The futures managers benefitted from their short energy positions as oil prices fell. Fixed income strategies may have benefited from the “divergence in economic policies between central banks.”

Long/short equity managers were down only slightly. They’ve been reducing their long exposures of late as a matter of risk management, the report says.

Event-driven funds suffered substantial losses, and merger arb funds did still worse. Some high-profile attempts at merging fell through in October, hurting funds in both those categories. For example, AbbVie tried and failed to absorb Shire PLC. AbbVie is a biopharm concern, a successor to Abbott Laboratories, and best known for Humira. Shire is a rare-disease specialist. It seemed a natural combination, and certain fund managers bet heavily that it would be a completed one.

AbbVie, an American drug company, thought that it would benefit from the merger with U.K. based Shire in part for tax reasons, as a so-called “inversion.”

AbbVie’s board changed its own view of the deal on October 16th, saying “the agreed upon valuation is no longer supported as a result of the changes to the tax rules” of the Obama administration in the U.S.