Women in Senior Roles in Alternative Finance: The Marathon Continues

First: I have to protest on a matter of vocabulary. No matter how completely lost a battle this is, it is still worth while getting off a shot. Human beings don’t have a “gender.” Human beings have a sex. Words have a gender!

A new report from Preqin draws attention to hedge funds in the Asia-Pacific region and their employment of women. As is all-too-common in the 21st century, the report refers to “gender equality” although it is clearly making reference to men and women, not words such as “men” and “women.”

That said, let’s look at the report. It emphasizes that the Asia-Pacific region is “is leading the way” toward, ahem, gender equality.

In the Asia-Pacific region, in single-manager hedge funds, 11.2% of C-level roles are in the hands of women. That is somewhat higher than the corresponding number of North America (10.9%), and much higher than the number for Europe (only 6.6%), or the rest of the world (7.2%).

Here is a different breakdown, by country, focusing on the key countries in the hedge fund universe: 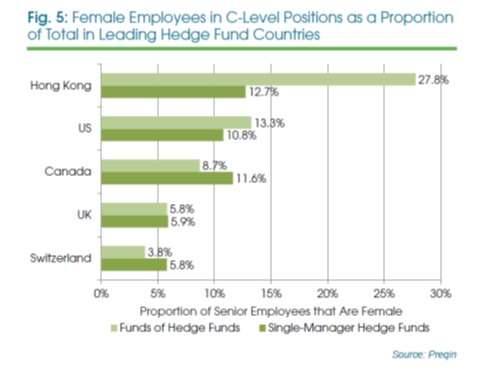 As one can see from the above graph, funds of funds are quite different entities from single-manager funds from the point of view of the Preqin study. In some places (obviously Hong King, also though not so markedly the U.S.) funds of funds are more woman-friendly. In other places (Canada and Switzerland) they are less so. In the United Kingdom the difference almost disappears.

Preqin also breaks the numbers down by assets under management. C-suite equality is doing better at mid-sized hedge funds than at either their larger or smaller counterparts. The female employees in C-level positions constitute 13% of the occupants of such positions when the AUM is between $500 million and $999 million. In the largest hedge funds (AUM above $5 billion) the number is 7.9%. For the smallest hedge funds (AUM below $100 million) it is 7.1%.

CTAs and Funds of Funds

Commodity Trading Advisers are less woman-friendly than either the F of Fs or the single-manager funds. Worldwide, the female employees in C-level positions at CTAs and only 4.3% of total.

But let’s return to fund of funds. The “rest of world” (that is, the whole world other than Asia-Pacific, Europe, or North America) leads the pack in terms of equality of the sexes here. “Rest of” sees 14.3% of the C-level positions in F of Fs held by women. For North America that figure is 13.1%; for Asia-Pacific it is 10.6%; for Europe only 5%.

What does all this mean? Well … it means that Preqin has a really good data base. It has, as the fact-sheet tells us, “profiles on over 7,500 hedge fund managers, including full employee and contact details.”

It also means, as we at AllAboutAlpha observed more than a year ago, that the pace at which women are entering high-level positions in the alternative investments world should be understood as a marathon, not a sprint. 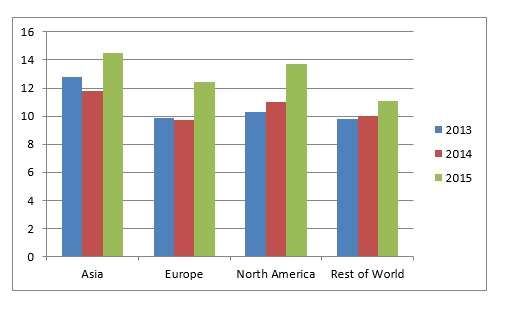 Separately, Preqin has released a report about women in the private equity industry that comes to much the same conclusion: in the PE world, too, it is Asia that is leading the way. An average of 14.5% of senior roles are now held by women there. The 2015 numbers are a sharp increase from last year’s (when the corresponding figure for the Asia-Pacific region was 11.8%). In Asia, as in Europe, this number rose dramatically from 2014 to 2015 after a drop from 2013 to 2014. For the two-year period, North America has seen the largest change, an increase of women in senior posts of 3.4%, from103% in 2013 to 13.7% at present.

Breaking this down by strategy, women appear most often in senior roles in venture capital (14.8%) or infrastructure (14%) funds, less often in real estate or buyout firms. In each of those strategic niches there was an increase from 2014 to 2015. In three of them, this followed up on an increase from 2013 to 2014, although in venture capital there was no movement 2013-14.