How well did hedge funds help their investors to hedge potential losses as a consequence of the markets’ immediate reaction to the Brexit vote in the United Kingdom? How well will they hedge the other uncertainties going forward?

Thursday, June 23, the UK voted to leave the European Union. The “leave” win defied the polls and the bookies. Unfortunately, in the days leading up to the vote, investors around the world seem to have placed a lot of credence in the polls and the betting odds, bidding up asset prices.

There was no mystery to the connection between that prediction and the rise in prices. Whatever one thinks of the merits of “leave” versus “remain” arguments, it is certain that departure means uncertainty, in a lot of respects and directions. As the date of the vote approached, and the poll numbers seemed to re-assure investors that those uncertainties would be banished when the counting was done, asset prices rose.

Thus, when the actual votes came in the other way, those asset prices headed quickly south. This was true around the world. To keep things simple, I’ll refer here only to the Dow Jones Industrial Average, after a bit of a digression.

A Digression about Soros

George Soros, who made headlines in 1992 by “breaking the pound,” effectively detaching it from the European Exchange Rate Mechanism, which was in place at that time in anticipation of the creation of the new currency, the euro, is a big part of the reason why there still is a GBP, a fact which makes severance of Britain from the EU possible now, however problematic.

So it is newsworthy that Soros acknowledges losing money on the Brexit. He was among those who were long the currency going in, effectively betting on a “remain” vote.  Sterling plunged by a record amount when that bet lost.

A Look at the DJIA

But to return to the main thread of our discussion: on the day of the referendum itself stocks on the DJIA closed at 18011.07.  That outcome didn’t become known until hours after the close. 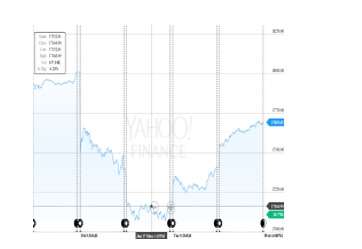 That, though, was the end of it. Not, obviously, the end of the consequences of Brexit but the end of the immediate sell-off. People and institutions seem to have seen a buying opportunity by the time the sun rose on New York on Tuesday morning. That day, the DJIA regained everything it had lost on Monday. The following day it continued up.

What were the consequences of this brief but wild ride for investors in general on the one hand and for hedge fund investors on the other?

According to the Eurekahedge 50, a joint venture of Quantvest, Markov Processes International, and Eurekahedge designed to track 50 of the world’s largest and most successful hedge funds, such funds earned their adjective.  Investment in hedge funds really did constitute a hedge.

On the 24th, while the DJIA underwent the above described dramatic decline (and while MSCI Europe lost 8.77% of its value) the EH50 declined only 0.36%.  A statement by Quantvest emphasizes that after Brexit day; the EH50 Tracker was holding gains for the year, remaining positive at 0.60%. 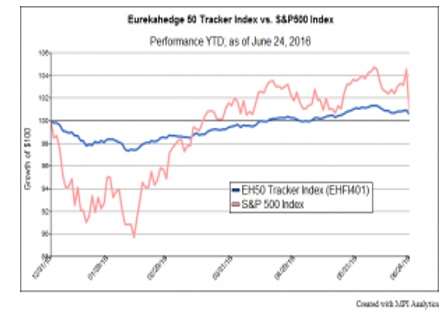 The above graph of the EH50 against the S&P 500 shows the greater volatility of the latter, not merely in reaction to Brexit but throughout the year to date.

This may well simply be an expression of the withdrawal of the largest hedge funds from equities, or from large cap equities, in favor of other asset classes and other strategies. The E50Tracker’s correlation has declined from almost 90% about two years ago to 60% at present.

The Months to Come

Beyond this, there is of course the issue of what strategies will work best in the months to come, as the consequences of Brexit continue to unfold, likely with a lot of surprises in store. Not only do we not know how various issues will be resolved, there is surely much that we don’t even know yet that we don’t know: what a wise man in another context called the “unknown unknowns.”

In a recent conversation, Don Steinbrugge, managing partner at Agecroft Partners, a third party marketer for many hedge funds, spoke to the broader issue of strategy going forward. “What happens to the rest of Europe? What happens to the euro? These are questions that are not going be resolved in the short term,” he said.

The uncertainty will mean that investors will demand a higher return. That will predictably lead to a decline in p/e ratios or a widened credit spread or both.

Strategies that will be the beneficiaries of a shift in demand include: relative value fixed income; market neutral long/short equity; CTAs; direct lending; reinsurance.