Eurekahedge: Performance Down, Inflows Up in 1st Half 2016

The latest report from Eurekahedge indicates that hedge funds’ assets under management are up by $19.9 billion in the first half of 2016 worldwide.

Eurekahedge, which tracks the health of the hedge fund industry month by month, also says that total industry performance-based results were down, $5.2 billion, so more than the whole increase in AUM comes from new investment.

Eurekahedge attributes the performance losses to “a weak global macroeconomic outlook coupled with strong headwinds in the aftermath of Brexit,” that is, the United Kingdom’s vote to exit from the European Union.  Relatedly, fund liquidations have outpaced new fund launches for each of the first two quarters of the year. A total of 372 funds have closed.

In the European hedge fund industry, closures have now exceeded launches for six consecutive quarters. A total of 484 funds have now liquidated there since the beginning of 2015, which as it happens was around the time the Swiss National Bank gave up the cap on its currency’s value vis-à-vis the euro.

The AUM of European hedge funds hit a post-crisis peak in 2013, and that total looks a long ways away from getting back to that peak.

But let’s look at the performance numbers some more. 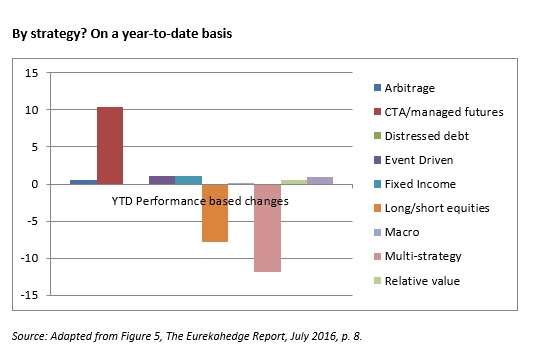 The clear winner among strategies is CTA/managed futures. These funds saw performance-based gains of $13.8 billion. They were followed, though not very closely, by macro and event-driven funds. The graph above may make the relations among the strategies clear.

In North America, meanwhile, the industry has posted performance-based gains since the start of the year, $2.7 billion.

But Let’s Talk About June

As to June specifically, the full break down by geographical mandate is below.

As an aesthetic observation, these charts sometimes show 0.0 in red because the 0.0 is itself a consequence of a rounding-off to one decimal place. If what is rounded is negative, the zero is red.

If one classifies hedge funds by size, on discovers that it helps to be big. The largest funds, those with $1 billion or more in AUM, raked in the most performance based returns in June. Smaller funds stayed flat.

Geographically, June was a very flat month for Japan with regard to both inflow and performance. Although Eurekahedge doesn’t mention this, the continued unrest over the competing claims to the Senkaku Islands could be affecting risk appetites there.

The Eurekahedge Event Driven Hedge Fund Index was down 1.07% on June. All the regional mandates within this space were in the red.  Japanese event-driven managers took the hardest hit, down 3.20%. European managers were down 1.98%, and North American down 1.09%.

The Eurekahedge Distressed Debt Hedge Fund Index was also down in June, although more moderately, at 0.59%. North American distressed debt managers took this hit the hardest.

Pulling back from month-to-month, though, both of the two indexes mentioned above, the EEDHFI and the EDDHFI, are still in the black for 2016. The former is up 1.64%, the latter 2.93%.

Pulling back a bit further, Eurekahedge observes that over a  42 month period, “the global hedge fund industry has raked in performance-based gains of US$211.7 billion,” and that the billion-dollar funds alone have accounted for one half of that. So, again, it helps to be big.