THOU SHALL NOT SHORT THE VIX 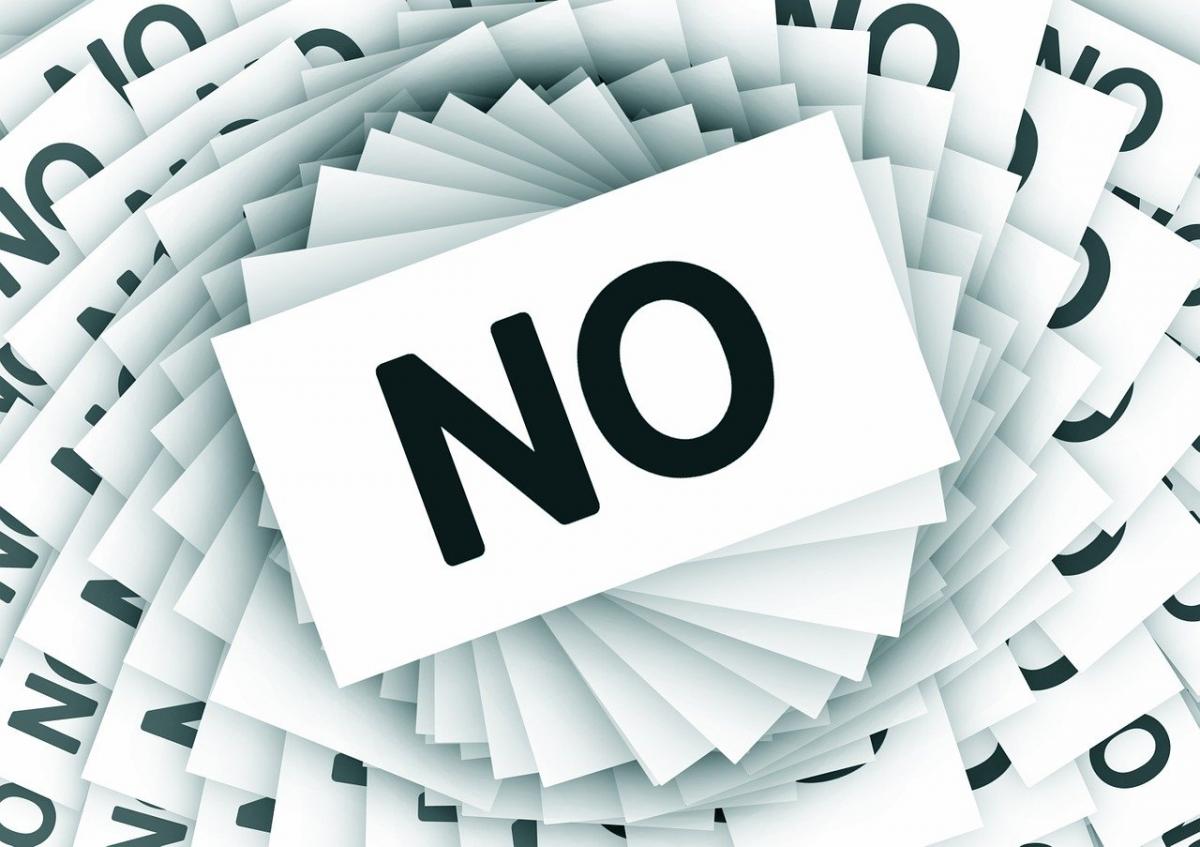 Scratching the surface of most people’s knowledge often does not reveal depth, but a lack thereof. When the former US Democratic candidates Tom Steyer and Amy Klobuchar were asked to name Mexico’s president, who is one the key counterparties for any US president, both failed. Surveying US citizens on where well-known tourist destinations like Italy or long-standing political foes like Iran are located on a world map results in rather awkward outcomes.

Similarly, most investors are familiar with the VIX as it is frequently quoted in financial media, but few make the effort to understand how it is calculated. For the majority of speculators, it simply represents the fear index, which is not a particularly accurate nor useful interpretation.

Given that the VIX has lately been trading at levels similar to those during the global financial crisis in 2008 to 2009, investors likely perceive the market sentiment to be at peak fear level. Some investors have noted that the VIX has mean-reverted quickly over time and are contemplating to short the index.

In this research note, we will investigate shorting the VIX from a theoretical and practical perspective.

The VIX measures the implied volatility of 30-day options on the S&P 500, although the actual calculation is quite complex. Implied volatility tends to be higher than realized volatility, which is called the variance risk and can be explained by investors paying a premium for options to hedge their portfolios. However, regardless of these well-known differences, the trends in both are almost identical.

In March 2020, the VIX reached an all-time high and breached the previous high from the global financial crisis. It seems that historically these peaks were rather sharp and implied volatility quickly returned to previous levels. In recent years this can be attributed to central banks responding swiftly to any market turmoil and actively supporting these markets via quantitative easing programs. 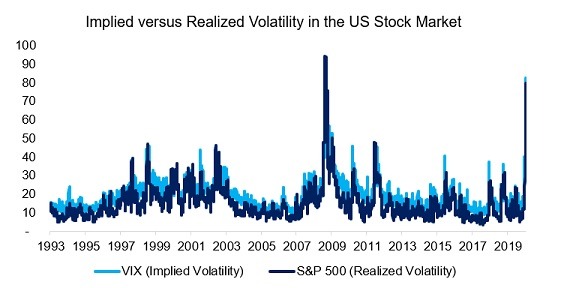 Most central banks are mandated to manage inflation, although the generation of investors that have started trading post-2008 might believe that avoiding stock markets from crashing is also core to policies. Modern central bankers have been challenged for caring too much on how stock markets are performing; however, they are under immense political pressure, especially the chairman of the US Federal Reserve given a rather vocal US president.

Naturally, investors can exploit this relationship by betting on volatility to mean-revert when trading at elevated levels.

A systematic, theoretical model would be to short the VIX when volatility is trading abnormally high compared to its recent history and exiting when mean-reversion set in, which can be measured with z-scores. The challenge in defining such a trading strategy is the number of assumptions required. We need to define entry and exit z-scores, the lookback periods, trading costs, implementation, among others.

We need to be cautious of overfitting and create two simple scenarios where we only vary the lookback period. The entry z-score is set at 4, which results in only a few trades each year, exit z-score at 0, and we trade on signals delayed by one day. The aim is to take advantage of the short-term mean-reversion characteristics of the VIX.

We observe that both scenarios had roughly similar performance profiles in the period between 1993 and 2020, but also some major divergences. The most significant one was in February 2018, when the VIX increased by more than 100% on a single day when stock markets declined due to the concern of the US Federal Reserve raising interest rates. The scenario with the shorter lookback wiped out all previous gains accumulated since 1993, while the scenario with the longer lookback gained as the short position was entered a few days later.

The sensitivity of these two relatively simple scenarios to the lookback period highlights the challenge of dealing with the VIX as a time series. It also highlights the risk of shorting a financial instrument can double its value on a single day, which is highly unlikely for almost all assets, except for stocks that are being acquired. There are worse events for humanity than a pandemic, e.g. a small asteroid on a collision course with earth or a minor alien invasion. 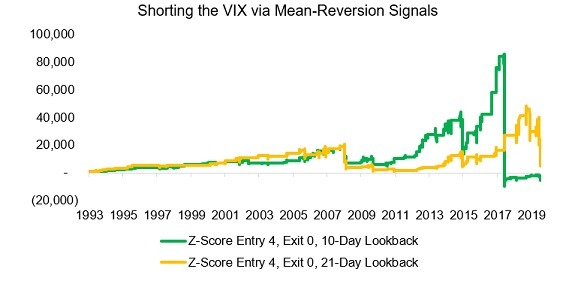 Even if a talented quantitative developer could identify a robust model to profitably exploit the mean-reversion characteristics of the VIX, there are some arguments why this might not be a sensible strategy for the majority of investors.

Implementing a short-volatility trading strategy will require investors to act when stock markets are typically in turmoil. There have been times when volatility was high and stock markets performed well, e.g. during the boom in technology stocks in 1999, but mostly volatility increases when stocks are declining.

Given the positive relationship between volatility and negative stock market returns on average, implementing such a strategy requires investors to allocate capital when they would be experiencing a significant loss on their equity portfolio, which is emotionally challenging for most investors.

Furthermore, volatility clusters and often lingers at elevated levels. Historically, this would have led to significant drawdowns in such a trading strategy. Few investors have the stamina to adhere to a strategy that frequently features drawdowns larger than 50%. 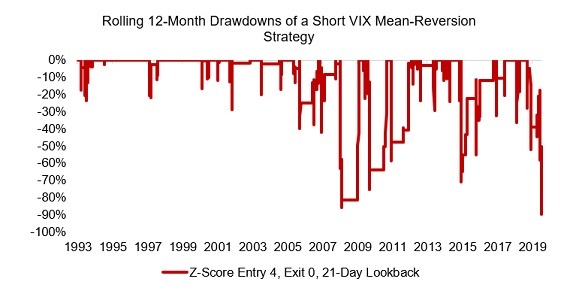 VIX data is only available from the CBOE from 1993 onward, which provides slightly less than 30 years of data. During this period the VIX only breached 50 twice, in 2008 when Lehman Brothers declared bankruptcy and in 2020 during the Coronavirus crisis. We observe that during this observation period the VIX always quickly mean-reverted to levels below 20.

However, we can use realized volatility as a proxy for implied volatility and extend the observation period to cover 90 years of financial history. We observe that during the Great Depression in the 1930s volatility remained at abnormally high levels for years, which would have made a short-volatility mean-reversion strategy unattractive.

A few years ago it would have been easy to argue that volatility will not remain at elevated levels for long periods of time given experienced central bankers that studied financial history with the intent of avoiding past monetary mistakes, such as those made during the Great Depression.

However, central banks globally have already used up most classic tools of their arsenal and are forced to devise new ones. There is a risk that these are or will become ineffective and volatility to remain high for years, much like in the past. 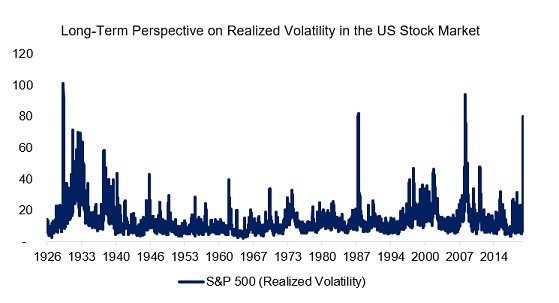 Even if an investor could stomach allocating capital when volatility is high and live through the painful drawdowns, then he would struggle to implement the short-volatility mean-reversion strategy as the VIX is not a tradable index. There are VIX futures and options, but these come with their own intricacies like roll yield and time decay.

Asset managers have launched various products related to the VIX over the years, but none replicate it precisely. Shorting volatility was a popular strategy post the global financial crisis given the frequent central bank interventions that created the buy-the-dip mentality. However, occasionally volatility spiked and led to the implosion of some short-volatility products like XIV in February 2018.

The most popular product for shorting volatility available today is ProShares’ Short VIX Short-Term Futures ETF (SVXY), which provides inverse exposure to short-term VIX futures and has approximately $650 million in assets under management. Although the ETF was not liquidated in 2018, it suffered a drawdown of more than 90%. After this, SVXY reduced its leverage to 0.5, but rebalances daily like most inverse ETFs, which can erode value quickly given negative compounding. As an alternative, investors could also short the iPath Series B S&P 500 VIX Short Term Futures ETN (VXX) that provides long exposure to short-term VIX futures.

However, comparing SVXY or a short position in VXX to theoretically shorting the VIX highlights vastly different performance. The VIX declined from 2011 to 2019, but exhibited negative skewness given explosive increases and slower declines. Due to compounding, this results in a highly negative performance when calculating a theoretical short position in the VIX. In contrast, SVXY generated high returns since 2011, but with extreme drawdowns that destroyed almost all previous gains.

Investors using the VIX as a time series when creating volatility trading strategies need to be aware that the available investment products will behave significantly differently to the index.

Especially inverse ETFs should be viewed with caution as they provide the desired short exposure on a daily basis, but given the mechanics of compounding that does not equate to a similar performance over longer time periods. 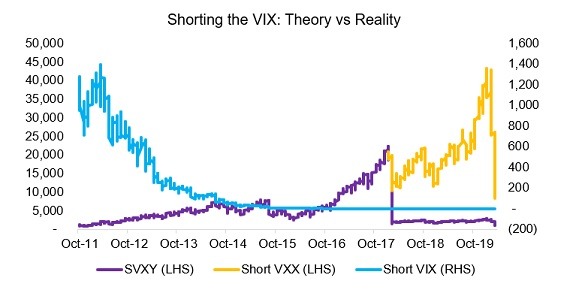 Analyzing the VIX is insightful for investors as it encourages them to consider the impact of a change in volatility on their portfolios. Unfortunately, most asset classes and strategies are directionally short volatility. Developed and emerging market equities, corporate and high yield bonds, private equity, venture capital, and most other assets benefit from a benign market environment. None of these increase in value when the global economy is heading into recession, which tends to reflect in rising correlations in crisis periods.

Few asset classes or strategies benefit when volatility is increasing or elevated, although these tend to generate the largest diversification benefits and are therefore highly valuable for any asset allocation framework, even if only as a satellite position. Unfortunately, these are typically difficult to hold for investors as they do not behave like the rest of the portfolio in normal times and are therefore constantly challenged. As usual, the enemy is us.