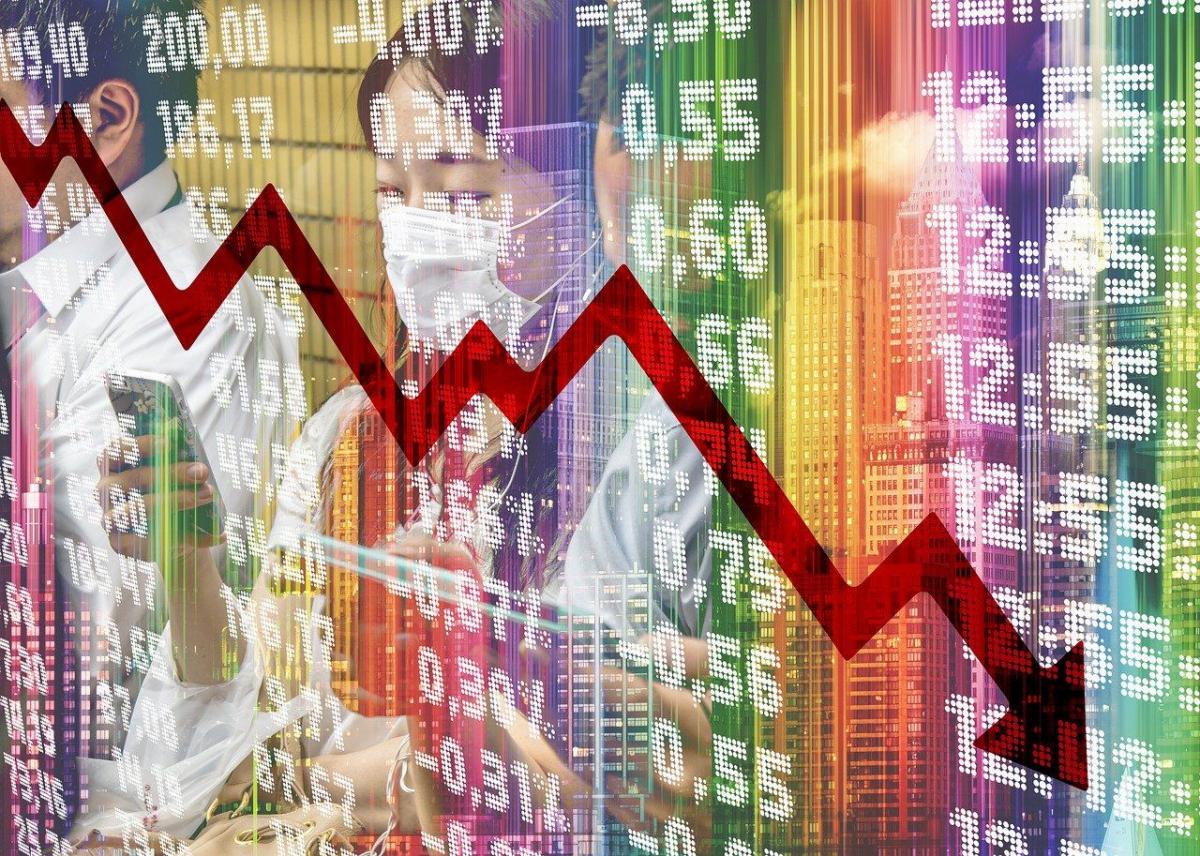 During the Global Financial Crisis (GFC), the role of hedge funds and their potential to provide significant downside protection was hotly debated. The same debate has resurfaced earlier this year again when markets for risky assets experience double-digit declines within just a few days.

Exhibit 1, which appeared in a previous post on hedge funds and financial crises, shows that it is a mistake to talk about hedge funds performance just as one would talk about equity or credit markets. Not only are there many different hedge fund strategies with their own risk-return characteristics, but within each strategy, we see large dispersion, especially during periods of financial stress. For investors, this is a reminder that one must diversify among strategies and managers if the AUM is large enough to allow that.

Exhibit 2 compares the performances of the CISDM broad index and the systematic CTA index to a few traditional asset classes.

Several systematic strategies (some old such as trend-following CTAs, and some new such artificial intelligence) are promoted by the hedge fund industry as having the potential to provide reasonable return and diversification benefits during periods of financial stress. Trend-following CTAs have a long history and have proven to provide some downside protection during periods of extreme market dislocation. Some refer to this characteristic of CTAs as crisis alpha. Here, I examine the performances of CTAs and other systematic strategies.

To start our closer look, consider Exhibits 3 and 4, which display the rolling betas of the CISDM CTA index with respect to the return on the S&P 500 index and changes in VIX. 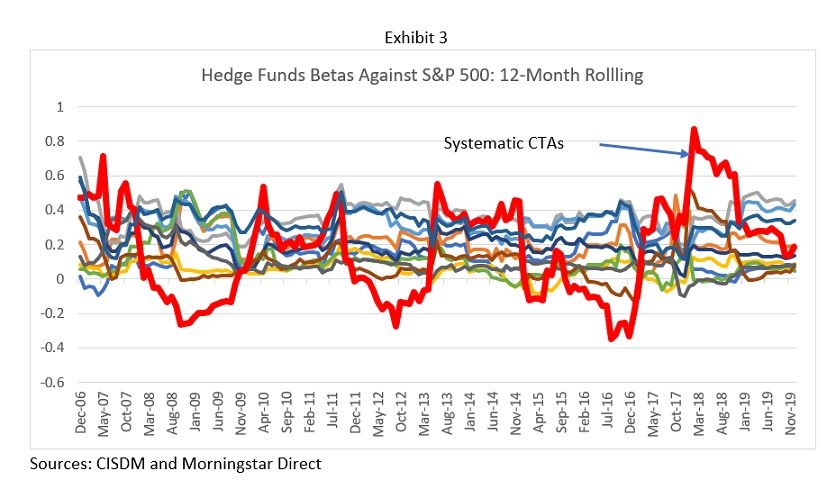 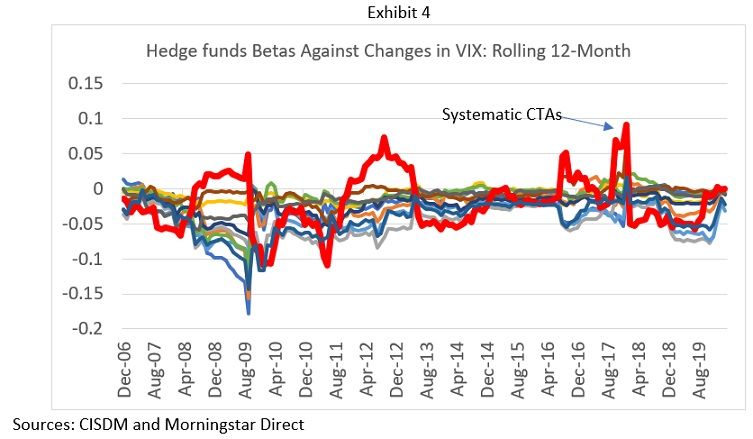 We can see that trend following CTAs appear to behave differently than other strategies. Both their equity and VIX betas fluctuate significantly as market conditions change. For example, as we approached both crises, the CTAs reduced their equity betas and increased their VIX betas. While CTAs lost money during both crises, the losses were lower than other strategies, and the top 20% of managers performed rather well.

Unlike mutual funds, where the monthly performance difference between the top and the bottom 20% rarely exceeds 1%, the dispersion of performances among hedge fund managers could be substantial. Further, this dispersion fluctuates considerably through time.

Exhibit 5 displays the performance dispersion of the top and the bottom 20% of CTAs who report to the CISDM database. One interesting feature of this graph is that during periods of increased volatility, not only dispersion increases, but the performances of the top and bottom managers tend to move in opposite directions. During normal market conditions, returns to the top and the bottom managers tend to move in the same direction, but that does not seem to be the case during periods of increased market volatility. 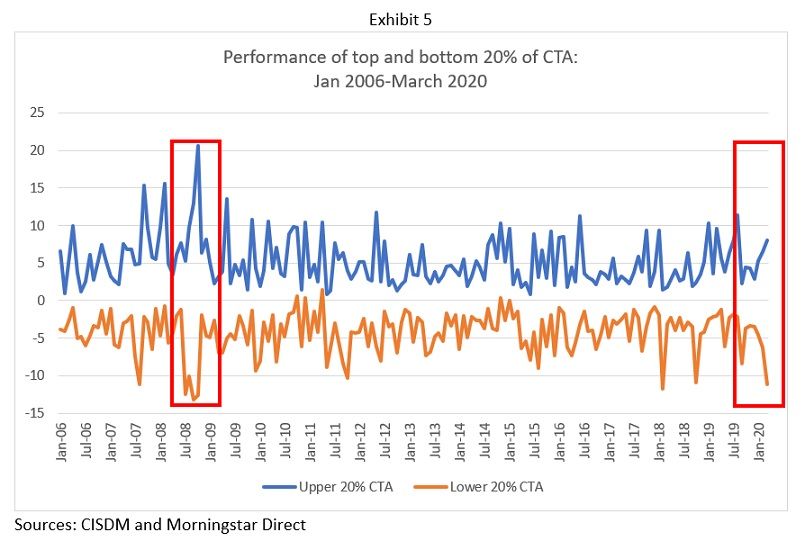 Next, I examine the behavior of several other systematic strategies. Exhibits 7 and 8 display the performances of several HFRX and Eureka hedge fund strategies. For comparison, three other investment strategies are displayed as well. The first column presents performance statistics for the 60/40 stocks and bonds portfolio. The last column contains information about the Eureka Hedge Top 50 hedge funds, an index that is designed to represent the return to a diversified portfolio of 50 hedge funds that are expected to display superior performance in the future. The next to the last column presents the performance statistics for a trading strategy that I have developed, which uses machine learning to implement a trending following approach. This strategy invests in equities, commodities, US Treasuries, and currencies. The performance figures reported here are gross of fees and do not include transaction costs or the cost of market impact. 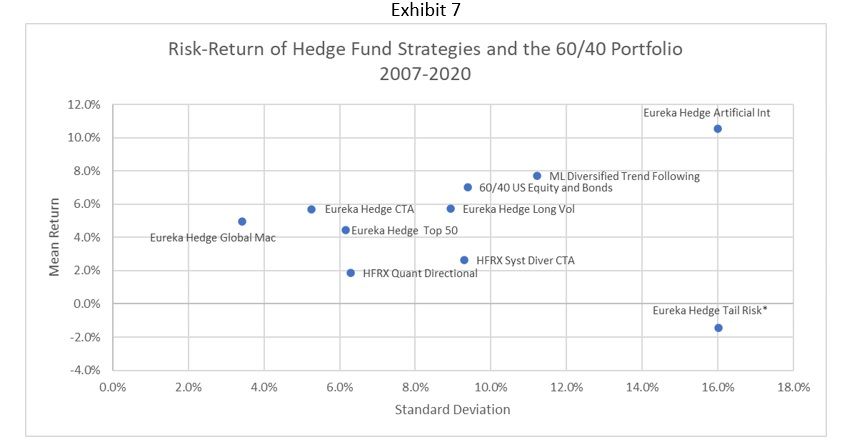 A number of observations should be pointed out:

Systematic and algorithmic strategies may not generate spectacular performances that many people expect, but they can be designed to provide significant downside protection during periods of economic turmoil. As I worked on developing the ML Trend-Following strategy, I noticed that changes that could lead to marginal improvement in the overall performance came at the cost of higher volatility and, especially, lower downside protection during periods of economic crises. One of the challenges of applying ML techniques to financial markets is the relatively low signal to noise ratio that one encounters in return series. It appears that if the model is designed to react only when the signal to noise ratio is high, then the performance during periods of financial crises improves considerably. The reason is that when there are extreme market dislocations, the signal to noise may actually increase because the trends in market prices become unusually strong. Exhibit 9, which displays the growth of $100 invested in the ML Trend-Following strategy, illustrates this point. 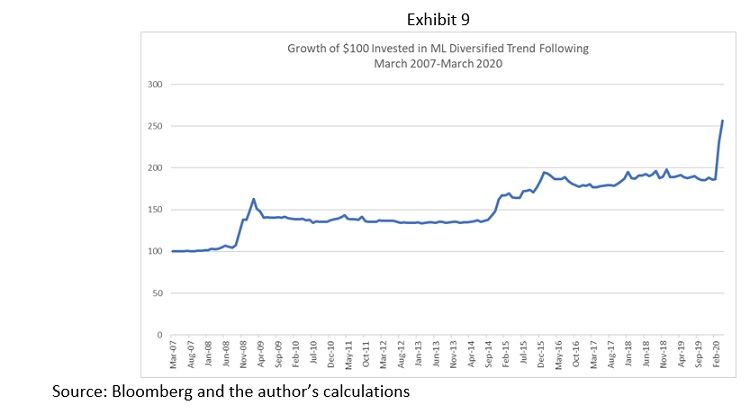 We can see that the strategy stays flat for several weeks or months and then kicks into action once it encounters conditions where the signal to noise ratio is high. The strategy basically made money during three different periods, 2008, 2015, and 2020 and was otherwise flat. For this reason, similar to other “insurance-like” products and should be evaluated in the context of a diversified portfolio.

Since hedge funds are not stand-alone investments for institutional investors, Exhibit 10 displays the performances of portfolios consisting of a somewhat large allocation of 20% to various systematic hedge fund strategies discussed above and 80% allocated to the 60/40 portfolio.

The 20% allocation to a single strategy is relatively large, and, as a result, we see some dramatic improvements in the performance of the 60/40 portfolio. Tail Risk, Long Volatility, CTAs, Global Macro, and ML Trend-Following strategies provided significant downside protection. However, the tail risk index reduced the overall performance by a significant amount as well.

Finally, Exhibit 11 displays the betas of the above strategies against S&P500, High Yield Bonds, and VIX.

As expected, the Tail Risk and Long Volatility strategies have negative betas against equity and credit risks and positive beta against volatility risk. The two trend-following strategies, HFRX Systematic CTA and my ML Trend-Following, also display negative betas against equity and credit risk. They both have close to zero betas against volatility risk. This points out that systematic trend-following strategies can be implemented to provide some tail risk hedging without incurring the substantial cost associated with Tail Risk funds.

Over the last 30 years, the average hedge fund has provided raw, as well as risk-adjusted returns that exceed those provided by most of the risky asset classes. However, this added value of hedge funds has not been evenly distributed through time and cross-sectional. While the average hedge fund provided significant alpha up the GFC, that alpha has mostly disappeared.

Several systematic and algorithmic funds have been developed since the GFC. As a result, we now have more than ten years of data on the performance of the new breed of funds in this area. The results show that these funds are capable of providing some downside protection during periods of extreme market volatility. However, most of these strategies reduce the over performance of a diversified portfolio by 50-150 basis points per year. The exception appears to be the Eurekahedge Artificial Intelligence strategy that has shown excellent performance and diversification benefits since 2007.

Finally, we saw that algorithmic trading strategies (e.g., similar to the Machine Learning Trend-Following strategy implemented by the author) could be designed for the specific purpose of providing a moderate rate of return (e.g., close to an equally weighted portfolio of stocks and bonds) while providing significant diversification benefits for portfolios consisting of traditional asset classes. This is in line with the primary purpose of allocating to alternative assets: to provide significant diversification benefits with minimal decline in the overall performance of the portfolio.