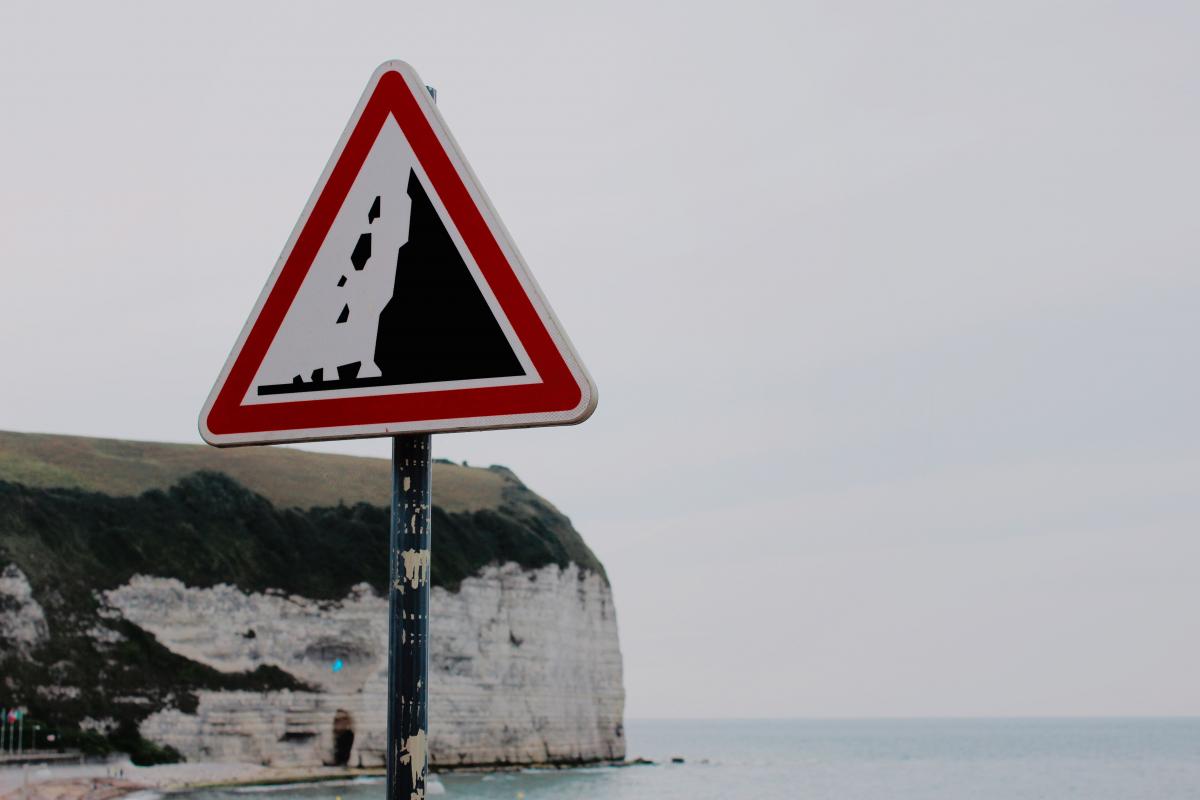 By Linus Nilsson and Rikard Lundgren Many investors, trading floor managers, fund of fund allocators, and risk managers have experienced unexpectedly large losses that were not predicted by their risk management systems. Seemingly out of the blue, a safe portfolio can generate large losses for reasons that had not been spotted, nor predicted. Investors should not expect risk systems to provide more than a partial coverage of all the risks embedded in investment portfolios. To fully understand all the risks within any portfolio is a never-ending task and requires experience, imagination, and creativity along with the hard work of analyzing traditional risk reports. In this article, we introduce some examples of unforeseen risks that have the potential to blindside even the most experienced investors. If these examples succeed in sowing a seed of sound doubt, triggering a more holistic risk approach, then we have achieved our aim.

"Anything that can hurt my portfolios and I am in particular looking out for the things that have not yet happened or that I have not yet imagined."

It is important to understand that some of the risks or biases we describe in this article may indeed be intended risks and part of an investment strategy. However, the discussion between managers and investors about the intended risks of a strategy is not part of this article. Exploding or imploding betas A portfolio of stocks may contain long positions and short bets with opposite beta dynamics. If the longs and shorts react very differently to a certain type of market movement this may cause larger losses than what a risk system's portfolio beta estimates suggest. To have different beta dynamics on the short and long side of the portfolio can indeed be a conscious part of an investment strategy. It does, however, result in a portfolio with a different and in some respects, higher risk than the risk report shows. As an extreme example, consider the stock of Volkswagen, subject to a takeover bid by Porsche combined with a so-called short squeeze. Recently, similar squeezes and remarkable price moves can be seen in GameStop, a company recently receiving large support from retail traders. The dynamics of those two trades are similar. Figure 1 Volkswagen's stock price and beta 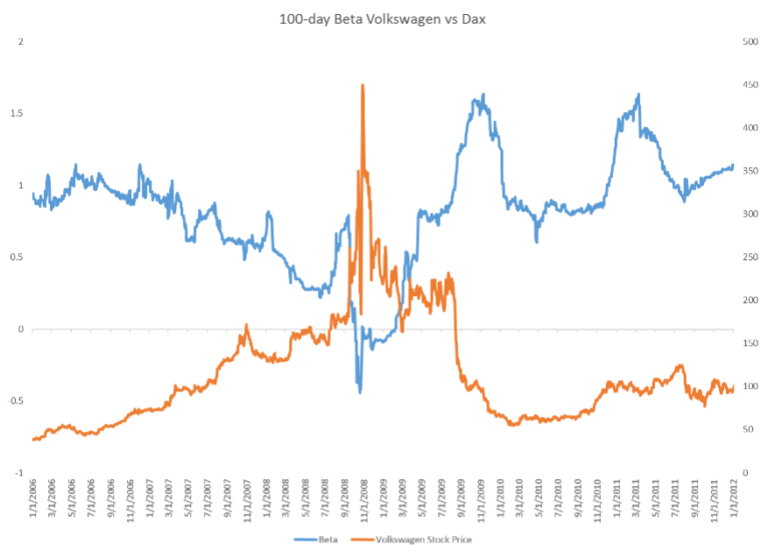 Volkswagen’s beta both imploded and then exploded during the financial crisis of 2008. Needless to say, the possibility of a short squeeze was not captured by risk systems. For a concentrated, leveraged hedge fund portfolio with different beta sensitivities on the short and long side, a hidden beta sensitivity bias can translate into a downside that is multiples greater than the upside, even though the portfolio seemed beta-neutral before such market move. Hidden credit carry Complex and diversified portfolios, which are often built by systematic, statistics-based models, may contain a persistent bias such as a carry-trade-like credit spread—even despite great diversification across asset classes and active trading of positions. A persistent rating bias can be the source of a substantial carry income. If this carry is persistent, the performance and risk of the strategy should be viewed as a mixof this passive credit-spread-carry income and active investment decisions. An investor may want to monitor such rating bias and include it as a credit spread exposure in his portfolio models. In addition, the investor might consider negotiating different pricing models for the passive and the active part of the strategy. Option premium pick-up If non-linear instruments such as options are allowed in an investment strategy alongside its underlying assets, there are several ways to compose positions that provide a premium income for taking on potentially unlimited downside risk. Non-linear instruments such as options are difficult to integrate into traditional risk systems, especially if such exposures are not transparently reported. Figure 2: CBOE PUT Index, an index that systematically sells put options on the S&P 500 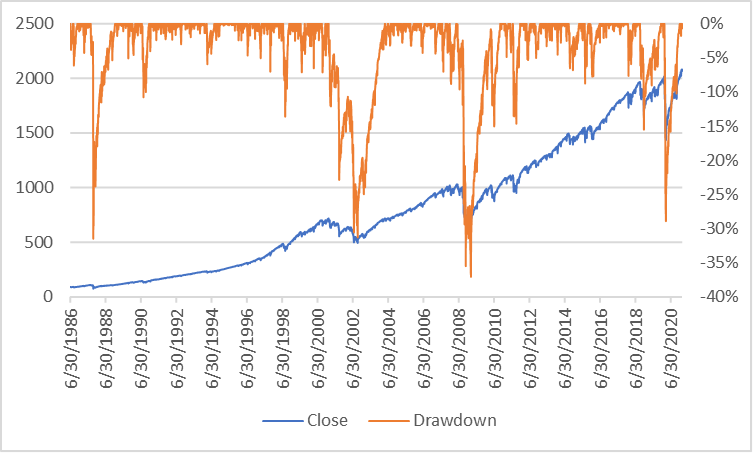 During long periods, this risk can display returns that are similar to the credit-carry exposure described above. It generated slowly accruing profits, only to suddenly lose years of profits during one volatility expansion. Selling volatility can be a profitable strategy over the long term but requires deep pockets to stay solvent through the drawdowns. Catching bubbles When the dotcom bubble burst in 2000, many investment strategies that were not investing in internet stocks were as badly affected as those that did. There was little or no diversification effect available in non-internet equities to balance out the large losses in internet stocks. Apart from the obvious reason that market panic affects all assets, there was also a phenomenon, which was more extreme than ever before: single sector concentration in stock markets. The extreme valuations of internet stocks buoyed the entire stock market index. To piggyback on this, a number of companies re-engineered or just re-labelled part or all of their business as internet related. In the present, we have witnessed a reverse bubble in value stocks, that have continued to underperform the stock market significantly as capital has gravitated towards high-growth technology companies. Risk systems are, as mentioned before, not very good at catching things that haven't happened before. Style drift Style drift is when a manager is changing the ways in which risk is taken away from the original investment strategy. Not all style drift is bad. For example, a systematic, model-based investment strategy’s portfolio manager decides to take active investment decisions and override what the models tell him. Such style drift is hard to detect over short-term or even medium-term periods even with good transparency. Such detection requires deep simulation analysis, together with pre-set and explicit expectations and follow-up of how a manager implements trades and takes risk. Minsky moments and VaR A fund that is governed by a VaR framework generally has better risk management than one that is not. However, when there is a change in market dynamics or a new market phenomenon is introduced, any predictive power derived from historical data will be greatly reduced. Uncommon events often coincide with large market drawdowns or dislocations. As a result, a VaR measure of how much a portfolio can lose is, when it is most needed, the least useful. The real risk of large losses may be at its greatest precisely at the time when the VaR risk report says it is low. In the words of Hyman Minsky, “stability is destabilizing.” Intraday trading One activity that may cause risk systems to report risk incorrectly is intra-day trading, especially for funds with end-of-day reporting. While intra-day trading may be a way for the investment manager to try to generate additional returns, such a tactic requires a different approach for risk systems to correctly capture and analyse risk and determine attribution of investment performance. Summary Measurement and management of investment risk have taken quantum leaps over the past decades. We may, however, still be blind to some risks that are not seen by our system.

To find such unknown unknowns still require a human process where experience and creativity are combined. The prudent investor will consistently be on the lookout for any and all risks to his investments, including not only those we have shown here, that are hard to capture but also those that are not yet known. We hope this article, in some small way, can highlight the importance of this work. About the Authors Linus Nilsson is the founder of NilssonHedge, a public hedge fund database, created as an initiative to bring transparency to the hedge fund universe. The database uses an innovative way of aggregating public performance data and offers access to hedge fund returns. Mr. Nilsson wrote this article in his capacity as founder of NilssonHedge. The views expressed in the article do not necessarily represent the views of any current, past, or future employers. Rikard Lundgren is a Luxembourg-based Advisor and Independent Director. He is a member of ILA and its Alternative Investment task force and of ALRiM. He was until 2016 the CIO and partner of IMQubator, an APG-funded seed investor in start-up Alternative Investment funds. Over the past 15 years, he was Chief Investment Officer for several multi-asset class institutional investment portfolios ranging from 250M€ to 20Bn€. He has more than 20 years of experience as Non-Executive Director and over 15 years of chairing boards. He has appeared as a speaker at many industry conferences, has published articles in the Hedge Fund Journal and other industry publications. The first 15 years of his career were in Global Markets trading and sales of First Chicago, Bankers Trust, Swedbank, and Deutsche Bank. He holds a Bachelor’s degree from the Stockholm School of Economics, is a graduate from the Swedish Army’s School of Languages, and speaks six languages.