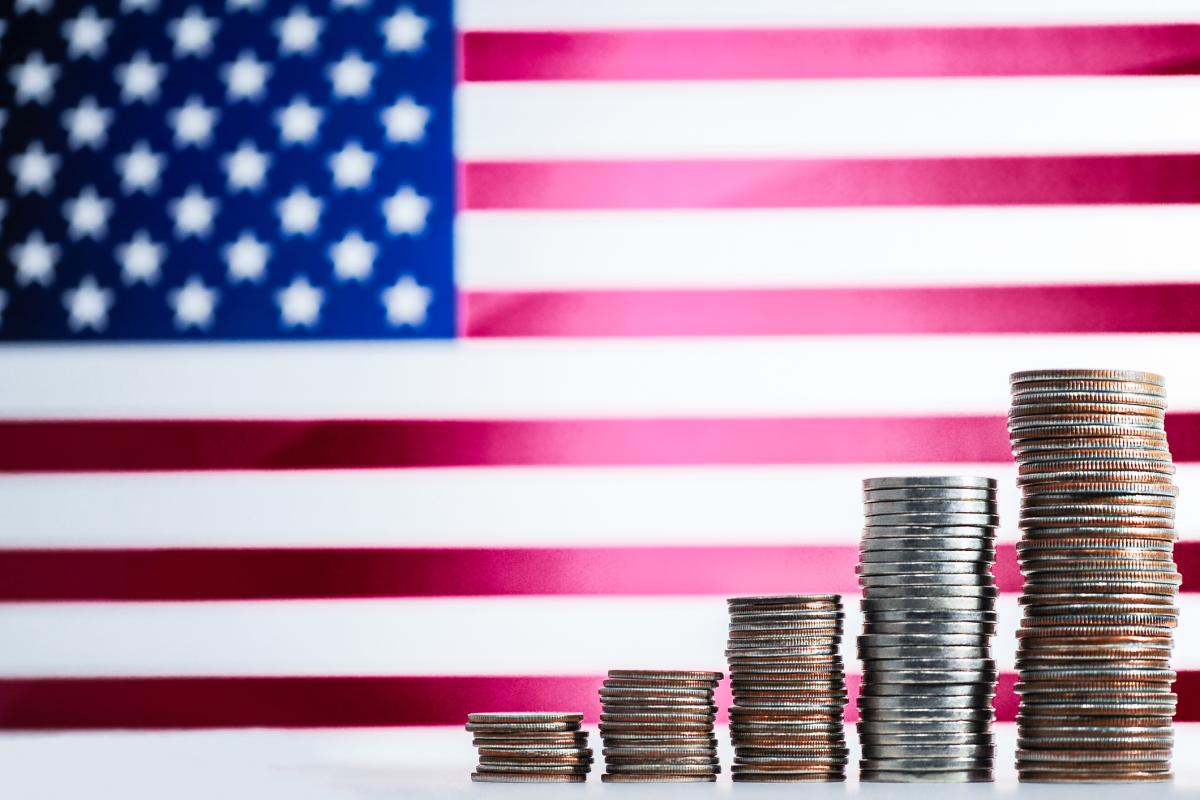 In our 2022 Annual Report we talked about the phenomenal increase in the balance sheet managed by sovereign investors since the start of the pandemic. In particular, US-based public pension funds have benefitted from the boom in equity markets and have been reporting extraordinary results for the 2021 fiscal year (ending on June 30, 2021).

The increase in assets has undoubtedly improved the health of the pension schemes, as measured by the funded ratio, i.e., the ability of the assets to cover all future liabilities. The world’s largest state-level PPF, CalPERS, reported a 21.3% return and a US$ 92 billion growth in assets for FY21 – which increased its funded ratio by 10 bps to 80%.

But what has this meant for other funds and states, and what is the current situation across the US – which remains the world’s largest country in terms of sovereign capital? Certain organizations including NASRA and the PEW Trusts issue regular analyses, but we decided to carry out an update with the primary source: the funds’ actuarial valuations.

Every year, Public Pension Funds carry out an actuarial valuation of their assets (actuarial value of assets, or AVA) and liabilities (actuarial accrued liability, or AAL). The former can be different from the book value of the assets and from their market value, which we normally refer to as assets under management (AuM).

The comparison of AVA and AAL indicates the health of the pension plan: their difference is the unfunded accrued liability, or UAL; and their division is the funded ratio. Such values are largely affected by the discount rate or expected investment return (the lower the rate, the larger the UAL), which is currently 5.5% to 7.8% for all US funds.

We analyzed all 210 retirement schemes registered at NASRA. The largest 133 of them can be grouped into 87 managers (e.g., the NYS Common Retirement Fund administers the NYSLRS including ERS and PFRS).

The other 77 funds, representing 3% of the assets, are smaller county or city-level schemes and were disregarded for this analysis.

There is a large disparity in the health of pension schemes across the country, from the 39% of New Jersey’s Division of Investment (least healthy) to the 106% of the South Dakota Investment Council (most healthy).

The largest states by pensions, California, New York and Texas, have improved their funded ratios to 77%, 91% and 81%, respectively. However, the funded ratios are still unsatisfactory, and the US average remains at 75% with a US$ 1.3 trillion total shortfall.

For comparison purposes, most Canadian pension plans are fully funded, with a 105% national average. To make things worse, the working population is expected to decrease from 64% to 57% by the end of the 21st century. In this context, US PPFs may have no choice but to apply more aggressive investment strategies in the years to come. 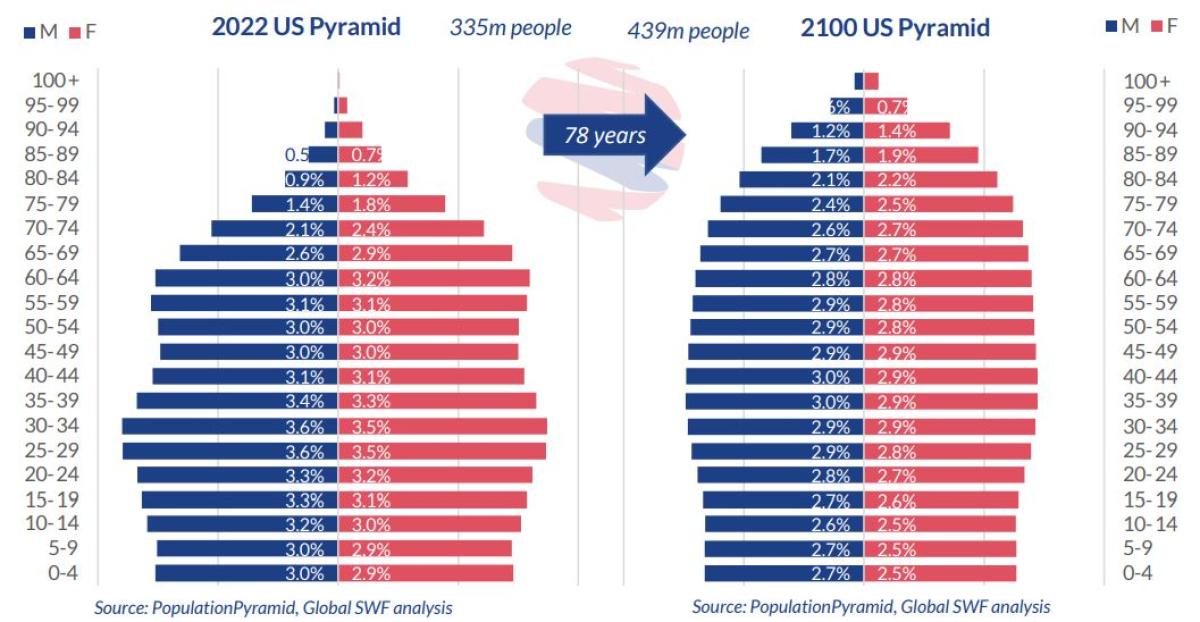 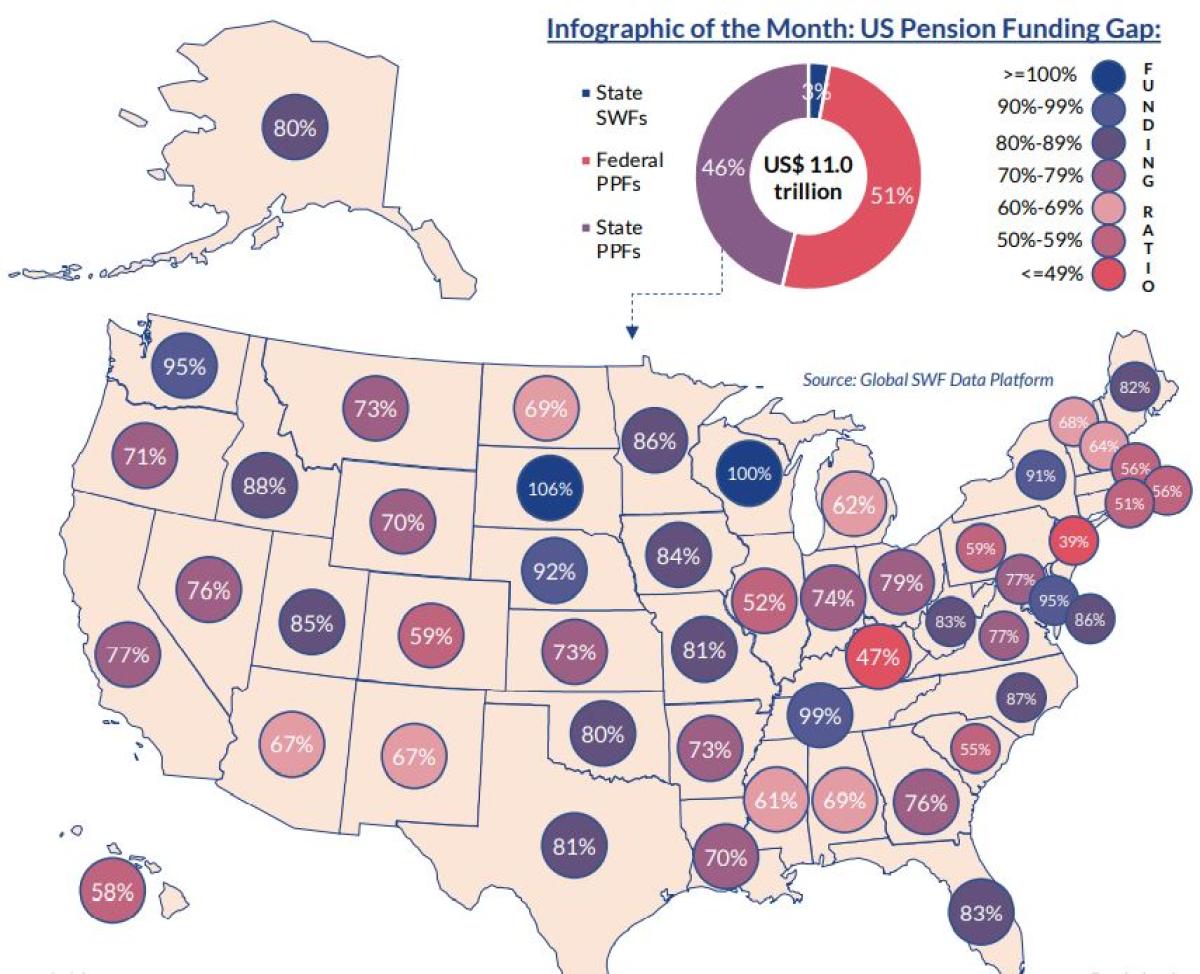 Global SWF is a financial boutique that promotes a better understanding and connectivity into the world’s major State-Owned Investors, including Sovereign Wealth Funds (SWFs) and Public Pension Funds (PPFs). The company was founded in July 2018 and is now formed by professionals and advisors working out of New York, Boston, Miami, London, Lagos, Abu Dhabi, Dubai, Singapore, and Beijing.

The firm focuses on two lines of business: consulting services, which include clients such as the World Bank, the United Nations and several governments establishing or reformulating their investment funds; and data services, with a platform that was launched 18 months ago and is already trusted by some of the world’s largest organizations including several SWFs, asset managers and professional services firms.

We assist governments to establish or reformulate their investment funds (Consulting) and run the most comprehensive platform of SWFs’ / PPFs’ strategies, portfolios and executives (Data Services).

About Diego López: Diego López is the Founder and Managing Director of Global SWF, a consultancy and data provider focused on Sovereign Wealth Funds and Public Pension Funds. During the past three years, Global SWF has completed projects for the World Bank, for the United Nations and for the Asian Development Bank; and supported the establishment and / or reformulation of several Government funds around the world.

Prior to founding Global SWF, he spent five years building up PwC’s footprint in the SWF industry as the Director & COO of the global practice, based in Abu Dhabi and New York, and he also worked for KPMG, Accuracy and Santander. He has lived and worked in Europe, the Middle East, China, Brazil, and the USA.

Diego earned his Master’s in Accounting in Finance from the London School of Economics (LSE) after graduating in the Universities of Madrid and Milan. He is a FINRA-registered rep with Series 62, 63 and 79. He is based in New York and is a prolific open water and ice swimmer, having raced in all seven continents including Antarctica, acted as an ambassador for the Ocean’s recovery and authored a book about the feat.