Chronicles of an Allocator: Alternative Data

This month’s newsletter covers the exploding world of alternative data, and the foreword is authored by Keith Black, PhD, CFA, CAIA, FDP. Keith was recently appointed Managing Director and Program Director at the Financial Data Professional (FDP) Institute, the organization responsible for the FDP Charter Program.

The growth of and use case for alternative data has grown dramatically over the last decade, which is further explored by Keith below:

“Your future is whatever you make it, so make it a good one.”

It was high school, in 1985, where I learned to program computers using storage devices that predate the floppy disk, such as punch cards and cassette tapes. In my undergraduate computer science studies, I learned languages such as Assembly, Pascal, and Fortran. At this time, you had to direct the computer every step of the way, sometimes loading data in and out of memory due to technical limitations.

Ten years later, I worked as a quantitative equity analyst. I was able to use a backtesting engine to test combinations of structured data to predict how stock prices would react to measures of value, growth, earnings momentum, and price momentum. The data was highly structured, where we could load tables of numerical values sorted by tickers. Data came primarily from each company’s quarterly income statement and balance sheet reports, supplemented with price data from stock exchanges and analyst estimates from specialized database providers.

By 2015, more data (28 zettabytes) had been created in just two years than in the entire recorded history of mankind. The Statista estimate for 2021 alone is 79 zettabytes which could double again by 2025. Where does all this data come from? You likely already know that services that are free to you (e.g., Baidu, Google, Facebook, or WeChat), are monetizing your data. Ideally, after removing all personally identifiable information (PII), hedge funds are reading your email and adding up the transactions on your credit card receipts. They follow the geolocation of your cell phone and can use satellites to track global shipping containers. Through natural language processing, your social media posts can be mined for the positive or negative sentiment relative to the macro economy or toward individual stocks.

This alternative data, however, is messy and unstructured, requiring a lot of work to tame it. However, the most value may be found in the untamed and raw data. And there is value in this data! In the three years ending May 2020, hedge funds employing artificial intelligence techniques outperformed the global hedge fund industry by over 700 basis points per year. Where do these profits come from? Nowcasting. We no longer need to wait for the quarterly revenue or profit reports of companies, as we already have a good idea of those numbers by aggregating drone or satellite photos of shopping center parking lots or the receipts of the credit card transactions we read. That is, nothing is a surprise anymore if you have the right data and the right analysts.

Fortunately, you don’t need to program in assembly language and store data on punch cards. The generosity of the open-source R and Python communities is so amazing that you can now build a machine learning model using less than ten lines of code. Those lines of code simply point to the data set and call a routine such as random forest using the parameters you supply.

“If you put your mind to it, you can accomplish anything!”

There’s so much innovation happening today already. Are you prepared for what’s to come in the next 30 years?

Welcome to the October edition of Chronicles of an Allocator, where we’ve curated content on alternative data that we hope helps aid your decision process. Of course, if you’re interested in upgrading your knowledge on this topic, I would encourage you to register for an upcoming webinar, co-hosted by FDP Institute and CAIA Association, Practical Machine Learning in Asset Management: Manager Selection and Valuing the Secondary Sale of Private Assets. Even better, consider becoming a candidate in the Financial Data Professional (FDP) Program.

We recently partnered with alternative data provider, Eagle Alpha, to publish a series of articles on our newly updated blog, Portfolio for the Future, focused exclusively on alternative data in private markets. The series is designed as a learning pathway for those in our community who want to learn more about accessing, vetting, and applying alternative data strategies in their private capital portfolios.

Click on the links in the section below to access the latest posts from the series as well as recent webcasts featuring the Eagle Alpha team!

With the rise of alternative data providers (from about 20 to more than 400 since 1990), alternative data is now used by as many as half of all investment firms, according to a May 2021 article by BuiltIn. Yet, as with any input to the investment process, investors seem to get what they pay (and work) for. Those who pay a premium for and have the resources to effectively scrub, tag, and normalize raw data themselves tend to gain better alpha-generating insights than those who rely on cheaper, easier-to-digest aggregated data sets, for which the information advantage can deteriorate quickly. The article also highlights emerging players in the alternative data industry who aim to help investors more quickly realize value from these raw data sets.

The weekly jobless claims report, published by the U.S. Labor Department, is still described as “the most timely data on the economy's health” in the United States. What does it mean when your Thursday night reservation at that trendy new steakhouse uptown takes its place? Indeed, timeliness is relative, and thanks in part to the pandemic with its daily twists and turns, economists and financial professionals alike are now turning to high-frequency data sets, like Open Table restaurant reservations or Google mobility data, over lagged government reports to signal where the economy is headed. A recent report by Manulife highlights the ways in which high-frequency data sets can serve as useful substitutes for long-trusted stats, like GDP or CPI, while warning against giving alternative data “blanket reliability” due to their newness and still unproven predictiveness.

Growth equity companies are staying private longer thanks to the abundance of private capital willing to support their strategic visions; alternative data may also be playing a role. Though these companies aren’t forced to disclose company data like their public-market counterparts, the availability of alternative data on these companies may be even more robust. For instance, according to a study by Blackrock, “the coverage of private company job posting data is roughly 300 times greater than that of public companies.” In other words, as the lines continue to blur between growth-minded private and public businesses, their data footprints have also become increasingly similar, making it easier for private markets investors to project trends for once obscured privately held companies. 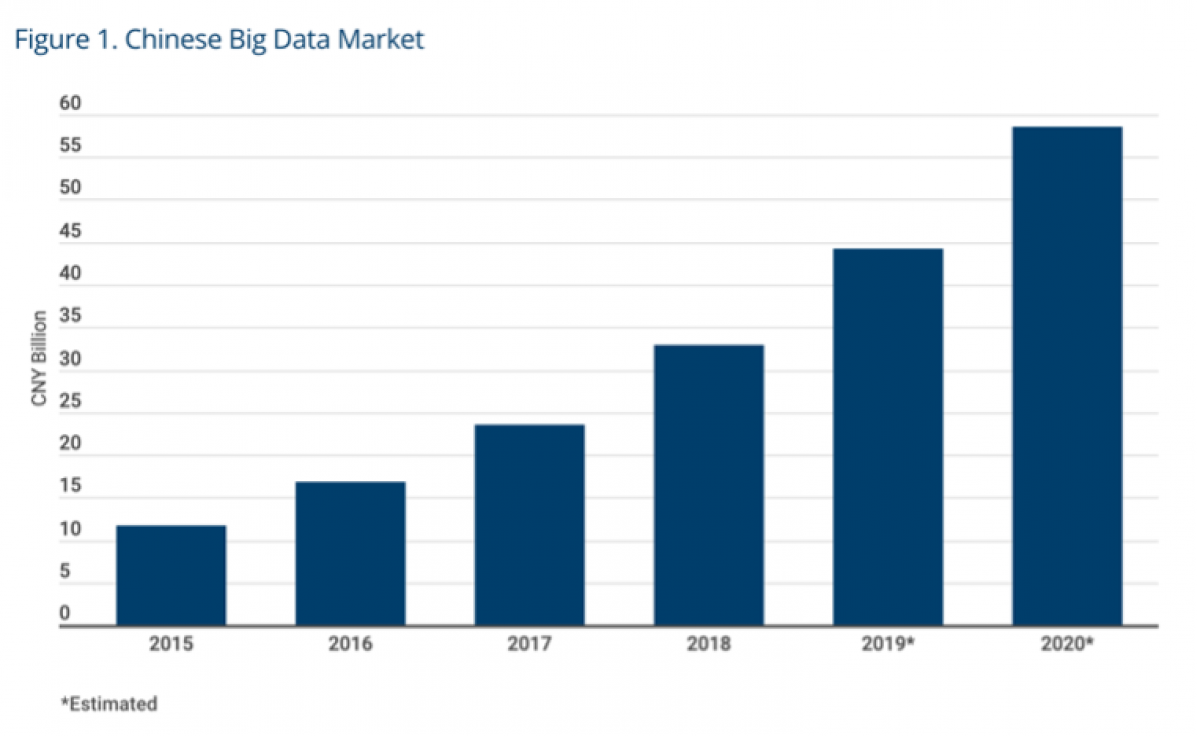 A new study by Man Institute touts China as the “perfect breeding ground for alternative data strategies,” and the growth since 2015 of the country’s big data market is proof of its potential. For foreign investors looking to tap into China’s wealth of data, Man Institute suggests going local, relying not on go-to global data providers but instead on their local proxies. Local data providers (think: Baidu instead of Google) tend to offer more real-time insights and offer a more accurate view of changing consumer tastes or industry trends within the country. That said, taking advantage of the data still requires a solid understanding of China’s on-the-ground vendors, regulations, and language.

Prospectuses and S-1s tell us relatively little about the growth prospects of a pre-IPO company, leaving most investors with a black and white view focused chiefly on past financial performance. With alternative data, such as browser traffic or website data, investors are investigating beyond the numbers that the company wants to (or has to) show and are garnering deeper, more nuanced insights into the customer behavior trends that signal potential growth, such as increasing market share, the sustainability of a customer base, and customer retention. Still, according to a recent article in Hedgeweek, data alone “does not give the answers,” and the interrogation process is where the true color around future trends is revealed. 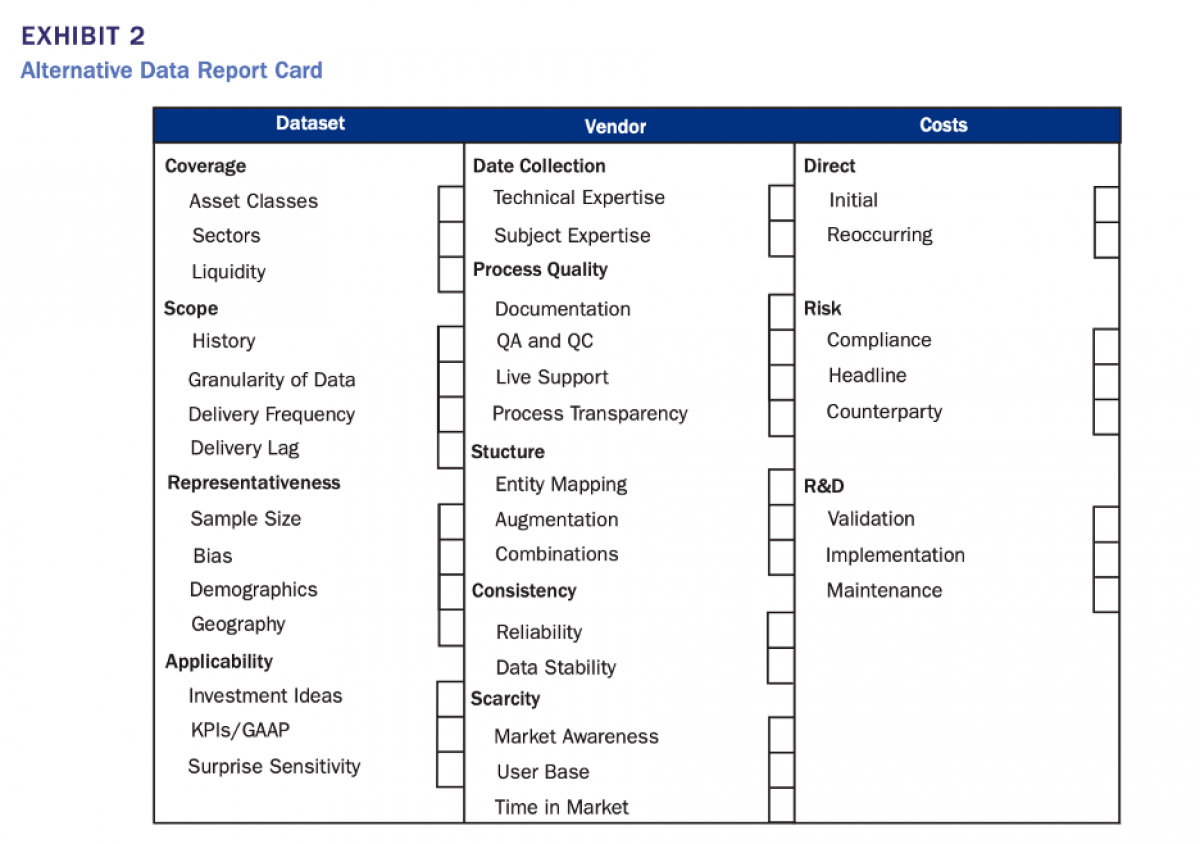 We’ve already covered ways in which alternative data can help investors determine the value of a business, but what of the value of the data sets themselves? Given the tradeoffs mentioned throughout this newsletter, which data sets are worth their high price tags? In an article in the most recent issue of the Journal of Financial Data Science, the authors review a few methodologies investors can use to determine whether certain alternative datasets are worth paying for, which include an event study, report cards, and the relationship between a dataset’s structure and investment performance. Due to the differences in value among data sets, along with the high costs of implementation, the authors foresee consolidation across the alternative data industry.