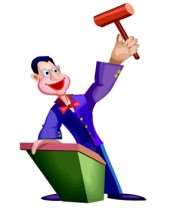 Anyone whose hunt for alpha turns on mergers and acquisitions among Delaware corporations might want to get a fix on this question: how are corporate boards of target corporations allowed to treat their rejected but persistent bidders?

Unfortunately, it is difficult to get a handle on this, because the Court of Chancery itself has not been at all clear. Two quite recent transcript rulings (or three, depending on how you count) make the obscurity itself quite clear.

Elements of the Problem

On the other hand, the directors of a corporation selling itself have a duty to their shareholders to familiarize themselves with all the material facts.  If they bring the gavel down too quickly, they may be violating that duty.  Even if they bring it down at the ‘right’ time, and circumstances change in a significant way before the deal closes, one can make a case that they should have an ‘out,’ and that they may have erred if they have concluded a deal that doesn’t allow themselves one.

A related concern: upon beginning due diligence, a buyer and its target often enter into an agreement that requires the board of the buyer to recommend yes votes to its shareholders, and that in essence prohibits the board from changing that recommendation unless certain conditions are met.  How restrictive can those conditions be? Should they have to stick wax in their ears so they won’t hear anything that would persuade them to change a recommendation?

Make the First Bid Your Best

In the first of two recent cases with quite similar facts, In re Complete Genomics Shareholder Litigation, BGI-Shenzhen seeks to acquire the titular DNA sequencing firm, Complete Genomics. On September 17, 2012 those two parties agreed that BGI would buy CG in two steps, and that at the earliest until March 14, 2013 (if the deal had not yet closed by then), CG would remain “irrevocably committed to the transaction.”

The board of CG was prohibited from changing its recommendation that its shareholders approve of this deal, except after giving five days’ notice to BGI. If it did give the five days’ notice, it would also under the agreement have an obligation to renegotiate in good faith with BGI in a way that might obviate the need for the change.

There were further wrinkles. CG had surveyed possible buyers but had discouraged auction-like competitive bidding. Before settling on the BGI deal, CG had convassed several other possible buyers, entering into confidentiality agreements with nine, standstill agreements with four (barring the potential buyers from improving their offer), and a don’t-ask-we-won’t-waive clause in at least one of these four (prohibiting the bidders from even asking for a waiver from the standstill agreement, or the board of the target company from agreeing to it if they did). The general point of such provisions is to caution potential buyers that they had better not hold-out and low-ball their bid, because they won’t get a chance to raise it later on.

Several shareholders thought that the five-day-notice rule and the provisions of the bidder standstill agreements were too draconian, and they filed suit.

Although on November 9, Vice Chancellor Laster issued a transcript ruling refusing to enjoin a merger between Genomics and BGI, two developments in the following days complicated the matter a bit more. First, on November 13, Genomics disclosed that another bidder had appeared (unsolicited) offering 5 percent more than BGI. Second, Laster decided that he had been wrong on one factual point at the time of the earlier ruling. He had been under the impression that none of the standstill agreements had included “don’t ask” clauses and he had subsequently learned that one of them did have such a clause. So he called all the attorneys together for another round of arguments and modified his order.

His November 27 order still left the merger agreement intact. But it did enjoin Genomics from enforcing a “Don’t Ask/ Don’t Waive” provision. So bidders who lost out to BGI can now ask for waivers, in other words for permission to bid again.

Does this mean there is a per se rule in Delaware against “Don’t Ask/Don’t Waive”?

Apparently not, given Chancellor Leo Strine’s decision in In re: Ancestry.com Shareholder Litigation, on December 17. The board of Ancestry.com, the owner of a popular genealogy-research oriented website, seeks to sell the company to private equity interests. The board has approved a bid by Permira Advisors and associated entities. But in early December, presumably in recognition of the Complete Genomics decision days before, Ancestry sent other bidders a letter affirmatively waiving the “don’t ask” provisions of its standstills.

Nonetheless, the existence of the “don’t ask” provisions became one of several issues raised by plaintiffs in an effort to have the purchase of Ancestry enjoined.

Chancellor Strine said: “I know of no statute, I know of nothing, that says that these provisions are per se invalid. And I don’t think there has been a prior ruling of the Court to that effect. I know people have read a bench opinion that way. And I think there was a lot going on in that case.”

Strine did enjoin the merger, at least until certain disclosure hurdles have been overcome, but his decision seems most remarkable because Strine sought to correct a misimpression that, he was concerned, his colleague’s decision may have left with the corporate bar.

Someday soon the Chancery Court is going to have to hand down actual written decisions on the circumstances in which a “don’t-ask” provision is or is not permissible. Until, then the ad hockery of case-by-case rulings existing only in the form of court transcripts may cause a fair amount of continuing confusion.