EDHEC-Risk, in collaboration with CACEIS Investor Services, the asset-servicing group affiliated with Credit Agricole, has now outlined the case for the creation of a new category of transferable security within the European system, the “Restricted UCITS.”

In a striking case of “burying the lead,” that new label doesn’t turn up until the final paragraph of the joint EDHEC/CACEIS press release announcing the study. For most of its length, the press release seems to be announcing a rather anodyne analysis to the effect that current regulation “does contain some very positive elements in terms of investor protection against non-financial risk” but that it fails to encourage stakeholders in the value chain “to contribute to the improvement of information and to manage non-financial risks better.”

Financial risks (the risks that the value of assets in a portfolio will suffer a sharp decline) are those which are, or ought in principle to be, borne by the investor.

Non-financial risks, such as the risk that a particular custodian or sub-custodian of collateralized assets will fail unexpectedly, losing or locking up the assets in litigation for an extended period: these ought to be borne by parties within the value chain, those who are in the best position to mitigate them.

In a 2010 study of this issue, EDHEC’s Noël Amenc and Samuel Sender contended that “The European Fund Management Industry Needs a Better Grasp of Non-financial Risks.” That was both their conclusion and their title.

The new paper, “Proposal for Better Management of Non-financial Risks in the European Fund Management Industry,” is written again by Noël Amenc, this time with Frédéric Ducoulombier, the director of EDHEC Risk Institute – Asia.

Amenc and Ducoulombier cite a survey of European finance professionals in the third quarter of 2011 that asked which non-financial risks were of most concern to them. 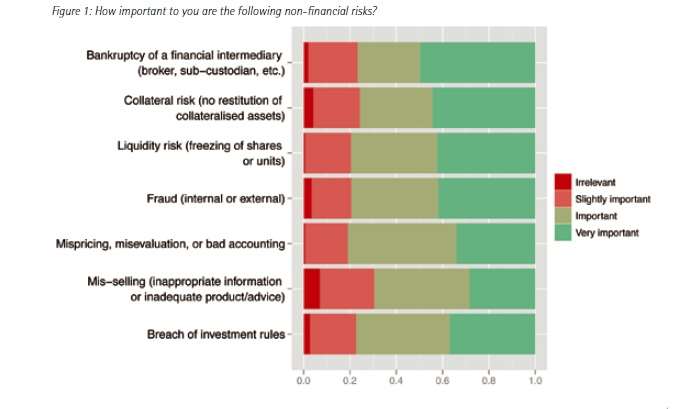 As the table above indicates, the bankruptcy of a financial intermediary was the most worrisome of the risks included in that research, at least in the sense that the largest group of respondents identified that risk as “very important.” If you lump together the responses “very important” and “important,” though, you can see that liquidity risk – as represented by the third bar from the top – is a concern (at least an “important” one) to a slightly larger chunk of the pertinent population.

The authors maintain that there are two key moves that will establish the kind of economic incentives necessary to secure better management of non-financial risks. First, the industry should adopt capital requirements proportional to the non-financial risk assumed by the major value-chain participants, “namely depositaries and fund management companies.”  Second, it should establish a system of residual risk assessment that would allow for the reduction of this capital requirement, depending on the application of best practices for managing non-financial risks such as centralized clearing of OTC trades, tripartite agreements for the securing of collateral, or adequate segregation of  clients’ assets.”

Beyond that re-jiggering, though, they suggest as I’ve noted the creation of an extension of the globally recognized UCITS brand, a new category of UCITS investment, to be labeled “Restricted UCITS.” The range of assets and operations eligible for an investment so labeled would be restricted only to those assets that could be kept in the custody of the depositary and to those operations that do not involve counterparty risk (because they are accomplished through regulated central counterparties as that term is understood in the EU). Further, the depositary will guarantee the full restitution of all assets for this new category, allowed Restricted UCITS to be “marketed without any duty to advice or any restriction when dealing with retail clients.”

The authors want Restricted UCITS created because otherwise, they fear, there will occur a sort of arms race in which depositaries would attempt to satisfy their clients in a competitive way in an escalation that would end with their “offering guarantees for risks they cannot really control.” The proposal would create a world in which they can control those risks, and so can offer that guarantee, segregated from the rest of UCITS so as to short-circuit such an escalation.

In an appendix, the authors treat of certain technical issues that involve the posting of collateral. For example, on the one hand “cash collateral results in higher funding costs for counterparties and complications for funds that do not usually hold cash,” on the other hand non-cash collateral when limited to the most risk-free of assets can artificially increase demand for the classes of asset allowed, and can hurt the liquidity of the counterparties.

Amenc and Ducoulombier recommend, as Amenc and Sender did in the 2010 paper, that parties be allowed to post “a broader set of eligible collateral with appropriate haircuts.” They also note that this idea has been picking up steam of late; it “is now the recommendation of the Working Group on Margining Requirements of the Basel Committee … and the International Organisation of Securities Commissions.”