Japan’s Largest Banks Invest in the Solar Industry, Expecting a Huge Boom in 2013 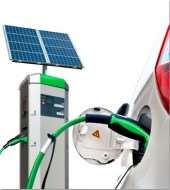 By Charles Kennedy, Oilprice.com The solar subsidy program that the Japanese government started in July 2012, in which they offer triple the rates of Germany, is expected to explode in popularity this year, turning Japan into the world’s third largest solar market after China, and either the US or Italy. Bloomberg has predicted that Japan’s solar market will be worth around $19 billion over the next three years; more than eight times as much as was invested in 2012. This vast sum of capital expected to be invested has attracted the attentions of Goldman Sachs, as well as some of the largest Japanese banks, including; Mitsubishi UFJ Financial Group Inc., Mizuho Financial Group Inc., and Sumitomo Mitsui Financial Group Inc.. Koji Shiroishi, the senior vice president at the finance division of Mizuho, explained that the banks were trying to take advantage of the huge opportunities that government support in the growing industry offered, claiming that “a lending pipeline of this size is rare.” Officials from the Japanese solar industry, and the government, have stated that they must learn from Europe’s solar expansion and rein in demand before it spirals out of control and creates a boom-bust cycle. Having said that the expansion of Japan’s solar industry may not be as prolific as expected if Prime Minister Shinzo Abe decides to change the current energy policies. Shinzo’s Liberal Democratic Party took power in the December national elections, and it is not beyond the realm of possibility that he may decide to alter the energy policies that were set by his predecessor.