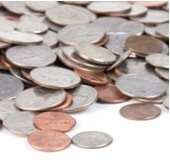 The Securities and Exchange Commission recently (February 5) hosted a roundtable on decimalization. The roundtable was an indirect consequence of the JOBS Act, which instructed the agency to study the question whether the move to penny pricing (from 1/8ths or 1/16ths pricing) has had an impact on small-cap stocks. The subject vividly illustrates the rule italicized above.

After all, the 1990s press to reform the exchange and lower spreads, the process that culminated in decimalization, was itself a reform in which good deals of energy and high hopes were invested. It was no quiet coup by ‘special interests,’ but (at least on the surface and even I would argue well below the surface) it was a sincere effort to serve the ‘public good’ at the expense of ‘special interests.’

Such phrases ought of course to be used with care, if at all, and this reform has not worked out. It turns out high frequency traders are a special interest too, not a strange mask worn by the public good. Indeed, knowledgeable and perceptive market participants have made the case in recent months that micro-economic regulatory changes have had deleterious macro-economic effects, especially by empowering HFTs in a way that inhibits initial public offerings by small and medium sized firms. If they are right, then part of the solution may lie in allowing for broader tick sizes once again, either at the discretion of the board of directors of the firm going public, or on the basis of market cap.

There were several strong voices at the roundtable in favor of alternative (wider) increments, and others who pressed for at least a pilot program. The first panel (9:45 to 11:15 AM) included, among others, R. Cromwell Coulson, president and chief executive officer of the OTC Markets Group.

Coulson, who calls the OTC Markets Group “an eBay of markets,” noted that “eBay has increments.” Marketplaces in general, he said, use increments. The proper use thereof is “an organizational skill.”

He also contended that businesses such as his own have had to contend of late with “a regulatory view that there’s something ‘icky’ when a broker-dealer supplies liquidity to the investors.” The regulatory process has become an effort to turn all broker-dealers into agency brokers, which is a Procrustean bed into which many markets won’t fit.

Coulson and his colleagues at the OTC Markets Group are “big supporters of bringing in increments,” he said. But they also think that as new increments come in “market makers should be displaying larger sizes.” What is great about the idea of a pilot program – simply “making changes and watching it,” is that you can be sure thereafter of an inference that was only a speculation beforehand.

A somewhat more skeptical voice (also on that first panel) was that of Kent Womack, of the Rotman School of Management, University of Toronto. “I think we’re missing something in terms of the very big picture,” he said.  As “IPOs have collapsed over this last decade, private equity has taken off.” He believes there has been a substitution effect – venture capital and private equity firms have taken up the slack created by the decline of IPOs.

He seemed to be of the view that the decline of IPOs for small and medium sized firms is neither a good nor a bad consequence of the combination of regulatory moves that may have contributed; it is just a neutral matter of substitution.

Further, he said that as a matter of chronology the decline in IPOs had set in well before the exchanges instituted penny ticks in 2000, so even if the decline is deemed a bad thing, decimalization can’t be the central cause thereof.

A Culmination of a Trend

David Weild, of Weild & Co., took exception to the notion that PE/VC activity makes up an adequate substitute for a functioning IPO market. [The name of David Weild may seem familiar to some of our readers; he was the co-author of one of the “guest chapters” of a book on the subject, Broken Markets, reviewed at this site last summer.]

Weild reiterated the views he expressed in that chapter.  In a prepared statement submitted before this roundtable he said that one-cent ticks “inhibit IPOs by compromising the breadth of institutional and retail equity distribution required to market and sustain visibility and liquidity in small cap stocks in the aftermarket.”

In introducing himself during the roundtable (webcast live and still available as an archive) Weild said that he is “passionate” about the question “how do we reverse that trend.” 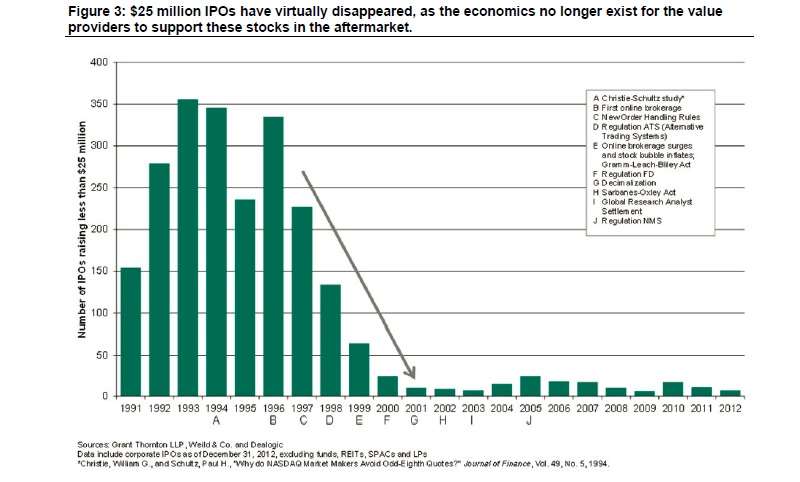 On the matter of chronology, Weild agreed with Womack that decimalization is not the single bullet that hit the IPO market. He sees it, rather as a culmination of a lot of other earlier developments, such as the reduction in tick size from 1/8th to 1/16th in 1997 and the Alternative Trading System reg on 1998. But the rule of those earlier regs doesn’t change the conclusion: artificially narrow spreads are part of the problem, and addressing that point is part of the solution.