SEI Knowledge Partnership has released a report on private equity and the “new realities” that the industry faces as it comes out of the year 2012. The points that jump out at me reading this are that managers need to listen to their investors more, and that consultants need to learn to them both. When the opinions of the three groups are broken down, consultants seem utterly out of touch with either of the others.

But we’ll get back to that. Let’s start as SEI does with the uncontroversial observation that “both the economy and PE continue their gradual recoveries,” but that problems still abound. For example:  PE funds are sitting on a lot of capital, creating markets in which too much money is chasing too few sound deals, lowering prospective returns for LPs.

Another problem arises from the state of global trade, and the heavy investment of many PE funds in emerging markets: Those are largely export-based economies and they have found that their core customers’ demand is slackening to a degree that threatens their own growth. In such contexts, then, acquisitions have become less attractive, and at the same time profitable exits have become difficult.

Another point: the treatment of “carried interest” as capital gains has come under attack in many countries.  Carried interest is the share of the profits of a partnership kept by the general partners by virtue of the fact that they have provided managerial services. In late 2012 the Swedish Administrative Court held that this is income rather than capital gains and should be taxed at the rate for the former.  SEI cautions that the same thing might happen in France, or in the United Kingdom.  The combination of political and fiscal realities in the U.S. makes the preservation of capital gains treatment for carried interest a tricky matter here as well, though SEI observes that “a tax hike on carried interest may not be as inevitable in the U.S. as it once seemed at the height of the presidential campaign.”

Yet another problem among those SEI surveys is the absence of growth among the investment base for PE funds. General partners might look to sovereign wealth funds as a new investor pool in their search for new and large infusions of capital. But even if the SWFs bite, that brings its own worries. SWFs have so little need for liquidity or liability marching this “could have repercussions for other, more traditional investors who have less flexibility.”

How to Raise Money

Facing these and other challenges, SEI says that there are three “key takeaways” for PE  fund managers who want to be able to raise money in this environment. First, it is important when raising money to be aware that your potential investors’ selection criteria are themselves evolving.  They are picky, or as SEI says in more formal language, due diligence is more rigorous than ever.” To survive it, managers have to be very clear how their investment philosophy will work in terms of acquisition criteria, sector expertise, client reporting, deep performance-attribution analytics, and an effective risk management infrastructure.

Second, and closely related, managers who offer enhanced transparency will derive a comparative advantage from that.  SEI is referring in particular to transparency about: leverage, volatility statistics, portfolio analytics, and counterparty risk. Only 43 percent of the investors surveyed say that at present they receive all the information they need from their fund managers.

Third, finally, managers don’t know their customers as well as they might. As SEI puts this, it is possible to “turn client service into asset growth.” Managers tend to believe that investor fear is the biggest obstacle to their ability to raise capital. But investors have genuine concerns, not fears, and these concerns “can be addressed by any manager choosing to adopt a proactive approach.”

Too Big a Picture

The study also indicates that the industry is “split by a number of disconnects between managers, investors, and the consultants who advise them.” These three groups within the PE industry have three very different ways of looking at challenges it faces. 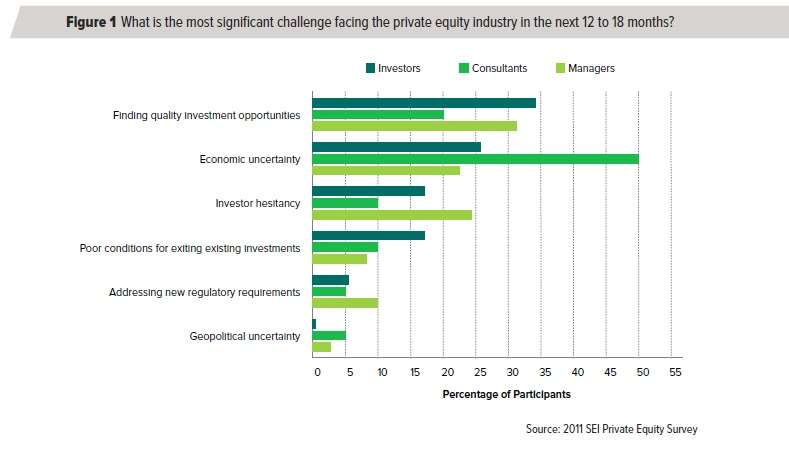 As the above graph indicates, consultants believe that economic uncertainty is the greatest challenge facing PE. SEI says generously that they are “apparently more focused on the big picture” than the other two groups. The most popular answer for investors and for managers, on the other hand, is “finding quality investment opportunities.”  Among managers, economic uncertainty wasn’t even the second biggest challenge (that was “investor hesitancy.”)

It is probably good news that none of the three groups believes that “geopolitical uncertainty” is a significant factor.