Improving the Health of Healthcare Endowments 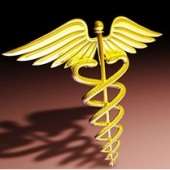 A new white paper from Commonfund Institute makes the case that nonprofit endowments for small and mid-sized health care organizations have to adopt more flexible management policies. In particular, they have to access illiquid investment opportunities.

The paper, Assessing the State of Healthcare, is the work of William E. Jarvis, managing director of Commonfund, who observes that the asset allocations of healthcare endowments tend to be more weighted toward cash and fixed income investments than are the allocations of other nonprofits. He compares healthcare endowments in particular with charities (“cultural, religious, and social service organizations”) on the one hand and foundations on the other, using data from Commonfund Benchmark Studies. 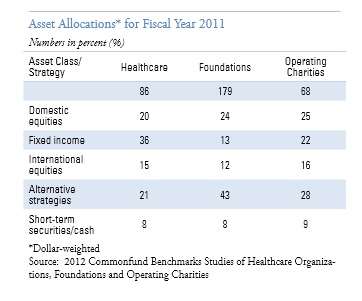 The obvious reason for the preferences of HC endowments is that they believe they need to remain very liquid. (Though they don’t have any more actual cash on hand – 8 percent of their portfolio – than do the foundations, and slightly less than do the operating charities.)

Jarvis points out that the liquidity preference comes at a cost in performance. He cites a classic 1986 study on the determinants of portfolio performance that found that of the three determinants (investment policy, that is, allocation among asset classes; market timing; security selection) the first, allocation, dominates. It alone accounts for 93.6 percent of the variation in returns among plans. That impressive figure dropped a bit, but just a bit, to 91.5 percent of performance variation, when Gary Brinson et al. updated their work in 1991.

As one would expect then, healthcare endowments have returned less per year than other endowments. “Given the other stresses that the healthcare sector is experiencing, this practice [of sticking to very liquid instruments] seems increasingly to resemble a luxury that will eventually become unsustainable as other sources of revenue for healthcare organizations continue to diminish.” 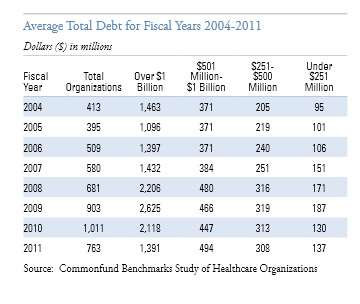 Further, the chart breaks down the trend by the size of the various healthcare organizations in the database, illustrating that the same pattern holds at all levels. The respite from increasing indebtedness provided by the year 2011 turns out to be limited to the largest institutions. The smallest organizations, those with assets under management of less than $251 million, saw an increase in debt from $101 million to $130 million by 2010, then a continued climb, to $137 million, in the final year of the period covered.

At the end of his white paper, Jarvis briefly considers what he calls the “donor dynamic.” Donors and potential donors are aware of the differences in investment performance on the part of different nonprofit institutions, and may want to get the best bang for their own charitable buck by contributing to institutions that invest successfully.

The typical contemporary donor, he writes, is “a self-made, capable businessperson who is able to assess the relative wealth-generation and wealth-preservation capabilities of the nonprofits to which he or she contributes.”

To make or keep donors happy, or to help their institution thrive even when new donors aren’t showing up at the door, then, healthcare endowments will have to “evolve toward becoming more like… other long-term nonprofit institutions,” and will have to abandon their habit of treating alternative investments as snakes to be avoided.