How Hedge Funds Need to Adapt: Part I

SEI reports on the ways hedge funds need to react to ongoing changes in the market, in order to adapt themselves to the tough climate of the present and the foreseeable future.

The report follows from two roundtables SEI sponsored in October 2012, one in London and one in New York, both moderated by Rachel S.L. Minard, the CEO of Minard Capital LLC.

On a bibliographic note, Ms. Minard has two books coming out in 2013: Speaking in Thumbs, and The Art of the Institutional Sale.

A Whole and Its Parts

Considering the hedge fund industry as a whole, its performance as measured by the HFRI Fund Weighted Composite Index has been unremarkable. Indeed, an optimist might say that money invested in the funds that underlie the HFRI would have (nearly) doubled over that decade, but a pessimist would surely remind him that one could say the same about money passively invested in the stock market. The S&P 500 Total Return has also (nearly) doubled over the same years, and has actually outperformed the HFRI.

Hedge fund managers typically respond to such points by saying in effect: Our fund, or our strategy, is different.   That may well in some cases be a valid response. But one can’t make that point simply by saying so, and one has to acknowledge the fact that just being a hedge fund is no longer a difference that itself matters to performance, or in the eyes of savvy investors.

So, the six critical adaptations are as follows: a sustainable edge; adaptability; clear value added; the right fit; scale or sizzle; business and marketing acumen.

The idea of a sustainable edge is listed first there not arbitrarily but because it is the foundation of the others. The SEI report quotes Marsha Roth, senior managing director with Angelo, Gordon: “Differentiation is critically important for managers in order to get institutional investors to understand the value your fund brings to their portfolio.”  Having a good track record isn’t sufficient. Investors want credible assurance that the results are repeatable. An arbitrage opportunity, after all, is generally a window that closes precisely because the arbs have found it. Nobody wants to invest in a track record alone because it can be an investment in profits that have already been made (by someone else!) through a window that has already closed.

“Few managers would be surprised,” SEI says in this connection, “that nearly one-third of the institutions queried in SEI’s 2012 survey reported making their due diligence processes more robust over the last two years.” The new robustness in the search for the nature and sustainability of the funds’ edge involves a new granularity, the questioning of specific investment decisions in the context of portfolio construction models.

Does this mean that hedge fund managers have to look after their brand? Well … SEI doesn’t like that word, both because it is vague and because their survey respondents differ on its significance however understood. 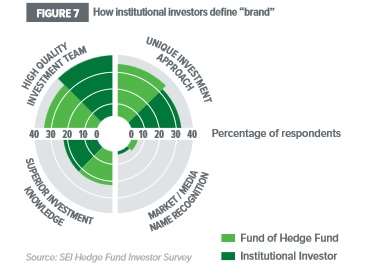 One of the points SEI discusses under the second heading, adaptability, is the future of the funds of hedge funds.  Of all the industry segments, this is the one “that has been most roiled by changing institutional demands” given the extra layer of fees it necessarily entails, and skepticism about the value proposition, the ways in which the FoHFs see themselves as earning those fees.  Total AUM in this segment peaked at $798 billion in 2007 and was at $638 billion at the end of 2012.

Ways in which FoHFs are adapting include: positioning themselves as outsourced CIOs; focusing on the discovery of promising new managers; providing lower-cost alpha-generating solutions.

We’ll close this Part of our discussion of the SEI paper with the third point on the above list, Clear Value Added. This was the “one overriding theme” of the New York and London roundtables.

As part of the issue of adding value, naturally enough, SEI presents the issue of fees. It stresses that the unquestioned acceptance of 2+ 20 by investors as just The Way It Works is a distant nostalgic dream.  In 2013 and for the foreseeable future, investors “expect to negotiate fees based on the value delivered.”