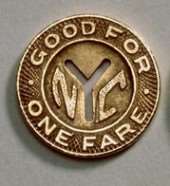 I’d like to supplement my earlier observations about the debate hosted by Columbia Law School on June 3 over two distinct post-Keynesian heresies.

At about 49 minutes into this livestream recording, Mosler launches into an analogy between the money supply and an old-fashioned metallic subway token.

He says that an observer might see the passengers putting the tokens into the receptacle, then proceeding to the train. He may also observe that the Authority in charge of the subway system eventually empties the receptacle, allowing for the reuse of the tokens.

The naïve observer might think the Authority is charging tokens in order to pay for the subway system. “First they collect the tokens and then they issue them” a visitor from out of town might say.

Now: which comes first? In terms of a nation’s currency, whether the currency is a stamped gold coin, paper packed by gold, or paper simply issued and declared to be currency, the natural temptation is to suppose that the payment comes first. The government charges people [wealth, whatever is its most easily collectable form] through its tax system, it collects the wealth, in many contexts money, and it later it puts that money back into the circulating economic system by spending it.

But, Mosler thinks, this would be a mistaken impression, at least for fiat dollars or for tokens. In either case, the issuance comes first, it has a logical priority.

People only hold subway tokens because the Authority has issued them. People only hold U.S. dollars because the relevant authority has issued them. In both cases, the issuing authority demands payment in that same currency. But it doesn’t do so in order to spend again. Rather, (in both cases, Mosler contends) the issuing authority demands payment in order to control demand.

There is only a certain amount of space on a subway train at any given time, so we accept the premise that the authority must limit demand.

In the case of the broad economy (on the Moslerian view) the purpose of taxation is not to spend but to constrain demand for private goods and services, thus keeping inflation to an acceptable level.

Thus, Mosler is perfectly willing to have governments create money for their own spending. He does not see that as necessarily inflationary, apparently because the same governments can always tamp down on inflation through the tax system, taking the money back.

I’m not a Moslerian, but I do hope that the above account is fair to him, because there is no point arguing with straw men.

The critical point that one has to make here in response, though, is that a subway token is not money, and not a valuable analog to money. After all, there is no use for a token other than riding the subway. The whole point about money, on the other hand, is that it is a universal medium of exchange.

Further, the utility of money for a variety of purposes is integral to the issues that brought Mosler and Murphy to the same table. Because money does any number of things, prices convey valuable information, and because prices convey valuable information, one range of prices in particular, the price of financing – i.e. the free-market interest rate – is as critical as it is.

At any rate, with money the first temptation is right: the government imposes claims upon wealth, and it uses its success as a collector to spend, or to raise further money by borrowing. It inflates when neither of those first two methods of extortion will pay the bills.

Consider an old parable, I take from Frederic Bastiat. Interest does not require money. Proof of its naturalness is the simple fact that interest (at a positive rate, though one hard to quantify) would come about even in a barter economy. Consider the acquaintance William and James, both carpenters.  James has created a plane, which allows him to make furniture much more valuable than he could with the tools that hitherto had been available, the hatchet, the saw, and the hammer.

After James dances for joy at the value of his new instrument, he discovers that William doesn’t have a plane. Further, William wants to borrow his for a year, and promises to return it at the end of that time in exactly the same condition (“as well polished and as sharp”) as that in which he receives it. 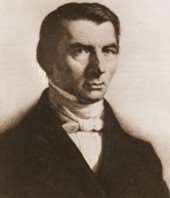 Assuming for a second that James trusts William to do so: is it likely he will go along with this proposal?