Eurekahedge: Vehicles Ran More Smoothly in May Than In… 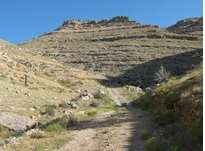 The independent data provider Eurekahedge tells us in its latest report that alternative investment vehicles, having travelled down the rocky roads of March and April, have since enjoyed easier passage along the smooth pavements of May. Well … actually, Eurekahedge didn’t torture the word “vehicle” into that metaphor – I’ll have to take the blame for that.

Still, Eurekahedge provided the graphic below. Breaking the global hedge fund industry down by the five most important regional mandates and taking the index as a whole alongside them, each of the six showed positive returns in May. Four of them had been negative in April. [And of one of the two that was positive in April, North America’s, we have to say: only just. Its April gain was 0.12%]. 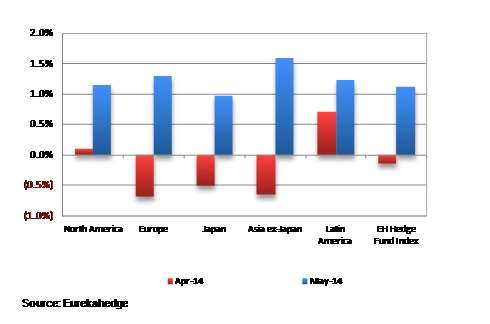 The turnaround in Asia ex-Japan is especially noteworthy. This region went from a loss of more than 0.5% in one month to a gain of 1.6% in the next. Eurekahedge attributes this gain to “encouraging news out of the world’s two most populous nations – China and India.”

In India, the news is of a new government, that of Prime Minister Narendra Modi. India’s economy has grown by less than 5% in each of the last two years, and that sets a rather low bar for improvements. In order to get over the bar, the new government has expressed an interest in enacting policies that will ease the way for foreign investment.

It is perhaps unsurprising then that, in the words of EH, managers “investing with an India focus and employing systematic trading strategies [posted] strong gains from their exposure to the CNX-Nifty futures contracts during the month.”

Largely because of India, an EM focus was the most successful strategy in May.

Meanwhile, in China, the Purchasing Managers Index (PMI) has produced heartening numbers. It rose in May to 50.8, beating the market expectation of 50.6. Anything above the round-number 50.0 indicates the purchasers expect growth.

The fact that Japan-mandated funds had a positive performance in May is especially good news, since they’ve had quite a drought through this year so far. They are still negative year-to-date. 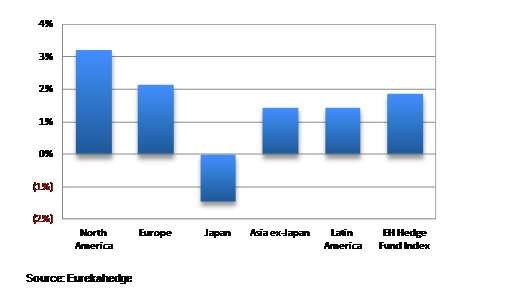 Everybody except Japan is now positive year-to-date.

Japan’s stocks performed spectacularly well in 2013, then as EH reminds us they have “retreated in the first few months of 2014 … triggered by doubts over the longevity of Abenomics … and the implementation of a sales tax hike in April, though the macroeconomic outlook for Japan appears to be improving.”

North America and Europe mandated funds are leading the rest of the globe in YTD results. EH describes success in Europe (and the rise of the underlying equity markets of late) as occurring due to Mario Draghi and the ECB’s “commitment to using both conventional and unconventional measures to fight deflation and unemployment, including negative interest rates….” On the other hand, this improvement in matters European occurs “despite the election of Euro-skeptics to the European Parliament.”

Looking at strategies, event driven, at top of tables for success in 2014 YTD, has performance-based gains of $6.5 billion, and such funds have attracted new allocations of $7.6 billion.

Overall, the report paints a picture of a global hedge fund industry that remains better at attracting money than at making money. Or, in the drier terms the report prefers, “performance-based growth” is spotty, but “net asset flows” remain pointed inward, not out, so the total asset line continues on an upward course. The current assets under management of the industry globally now exceed US$2 trillion. Two hundred billion of that has been allocated to the funds, new capital, since January 2013.