Global equity markets are doing well now and the hedge fund industry benefits. That’s the gist of the latest report from Eurekahedge, with its numbers for June 2014 and for the year through June.

Central bank policies continue to support economic activity. In the U.S., the Federal Reserve’s commitment to keep interest rates low “for a considerable time” has taken the edge off its announcement of the end of bond purchases. Meanwhile, the European Central Bank has imposed negative interest rates on bank deposits, in what Eurekahedge calls “an unconventional move to raise inflation to target levels.”

Eurekahedge says that although instability is “brewing again in the Middle East,” things have settled down a bit in Eastern Europe. I should observe that the report was written prior to the shoot-down of a Malaysian jet over the Ukraine. At any rate, Eurekahedge credits the quietude in the former Soviet Union as a reason for the optimism of many investors in June.

In the graph below, (somewhat adapted from Eurekahedge’s original) you see the region-by-region breakdown for the last two months. 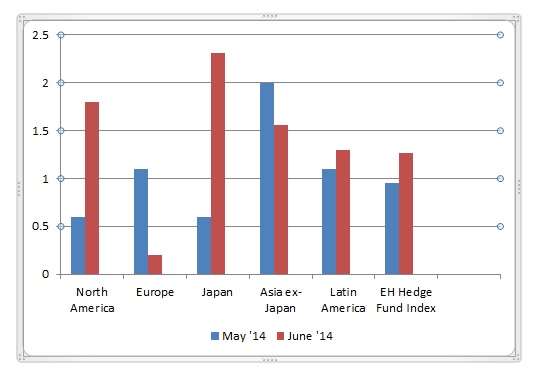 Adapted From EurekaHedge, Fig. 1, May and June 2014 returns across regions.

Japanese mandated managers performed best in June, returning 2.31%. Eurekahedge suggests this is related to the signals sent by Japan’s Government Pension Investment Fund that it may increase its allocations to domestic equities.

Arbitrage and relative value funds were down 1% in June in Europe, but were up elsewhere. Overall, the Eurekahedge Arbitrage Hedge Fund Index rose 0.75% in June, the tenth consecutive month in which that index has achieved positive returns. North American focused funds in this group did very well, at 0.69%. Latin American funds in the group were in the positive numbers though just barely, up 0.09%.

Long-short equity funds are up 1.71% for June. India’s long-short equity funds returned 5.69% in June, giving them an impressive YTD figure of 32.81%. But it was Japan focused funds in the group constituted the outliers, up just below 8%, fully reversing the losses these managers had suffered earlier in the year.

There has been a 10.9% decline in the share of long-short equity funds in Asia since 2008. This may be attributed to the maturation of the industry, and the search for diversification on the part of its clients. The long-short strategy, strongly correlated with the underlying markets, is just what many investors don’t want.

Distressed debt funds with a European mandate gained handsomely in the first half of 2014, 14.72%. Eurekahedge observes, though, that the population of funds with this combination strategy/geography mandate is small.

Yet as traditional European financial institutions try to deleverage their balance sheets, many are leaving the role of distressed-debt investment up to hedge funds, so we may expect this population to increase in months to come.

Eurekahedge has included in its report a fascinating Big Picture look at the Asian hedge fund industry since 2008, including trends in launches and closures year by year.

In the fourth quarter of 2008, unsurprisingly, the number of closures dwarfed the number of launches. In the first half of 2009, closures and launches ran more-or-less even, and then the industry regains its confidence and launches outpaced closures from late 2009 until the middle of 2011. There was another spike in liquidations late in 2011, and continuing through 2012, with smaller hedge funds in particular failing to qualify for their performance fees.

Confidence and launches have made another comeback since. In the last year and a half, 184 new funds have launched in Asia.