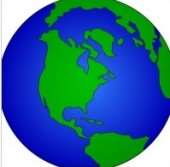 The March 2015 report from Eurekahedge makes a point of how much the hedge fund world has changed since 2007. For example, the share of globally mandated funds has risen to 65.7%, up 8.1% from eight years ago, because geographic diversification has become an important part of diversification sans adjective.

Eurekahedge makes the related but distinct point that investing in a globally mandated fund is a cautious way of getting some exposure to the emerging market word. It’s just a lot less scary that investing directly in an EM fund. The one type of mandate has expanded while the other has contracted: EM mandated funds now control only 3.7% of the industry’s AUM: down from 6.5% in 2007. 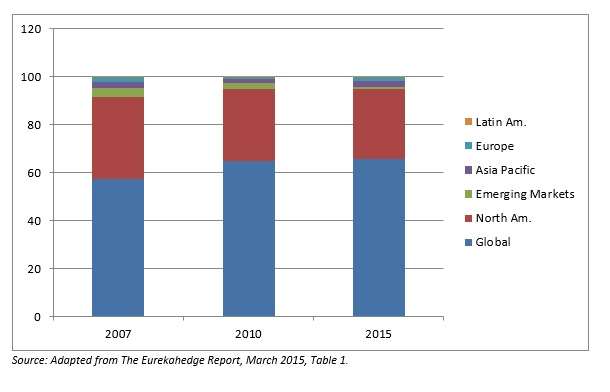 North American funds have also lost share, but North America remains the single dominant regional mandate. Indeed, the loss of market share for those mandates since 2010 has not been dramatic, only a slippage of 1.1% of the market.

Event driven funds, on the other hand, have gained ground, as have macro funds.

For some strategies, the story has been a bit more complicated: a loss of market share in the early years of the Great Recession, then some recovery toward former glory since 2010. Long-short equity fell from 38.9% to 31.1% in the period 2007-2010, but has risen to 37.6% since.

Looking at smaller timelines, the Eurekahedge report says that over the 26 month period beginning in January 2013, the global hedge fund industry achieved performance-based gains of $222.7 billion. The largest hedge funds, those with more than $1 billion in AUM, accounted for more than half of those gains.

For the final two months of this period, the first two months of 2015, performance-based gains for those largest funds came to $22.9 billion, out of a total gain of $33.6 billion for the whole industry.

So much for the idea that the nimble little monkeys are better than the lumbering elephants. The elephants seem to be doing well, thank you.

Eurekahedge infers that “the success of small to medium sized hedge funds … will become increasingly dependent on the skill of managers in growing them to appoint where they can gather enough scale to attract large institutional investors.” Increased compliance costs and pressure of fees are making scale critical to survival.

Most strategies were positive in February, although some dipped into (marginally) negative territory.

CTA/managed futures recorded the highest net inflows, at $4.7 billion, and $6.3 billion for February YTD. This coincided with an unimpressive performance (only $100 million performance based gain). It also reversed a trend of outflows in place since the second half of 2013.

Returning to the issue with which we began: the geographical mandates. Even on a short presentist timeline there continues to be a lot of movement out of Latin America. Eurekahedge attributes this to the fall in commodity prices, improving returns from developed markets, and sharp currency devaluations vis-à-vis the U.S. dollar.

It also observes that total assets in funds with a Latin American mandate are down to $56.5 billion, the lowest level in two years.