EDHEC: Smart Beta Indexes May Be On a Launch Pad

EDHEC-Risk Institute surveyed 222 European ETF investors and found a lot of support for some innovative financial engineering of the smart-beta variety.  So, great crackin’!

The survey found, first, that users of exchange traded funds are generally satisfied with the results they’ve been getting.  Unsurprisingly the satisfaction is greater for some asset classes than for others. In particular, satisfaction has increased of late for corporate bond and government bond funds. It also remains very high for equity ETFs: so high that there is little room for improvement, as indicated by the flat line at the top of the graph below.

Looking ahead, the survey found that ETF investors plan to increase their holdings in this space.  When we look at the specifics of this point we get to the smartness of smart beta.  A quarter of the respondents now use products that track smart beta indexes. More than two-fifths are considering such investments in the near future. So this looks like a growth market.  Relatedly: the range of reasons for using ETFs has widened. It was once chiefly a portfolio reallocation tool or a tactical bet. It is now a candidate for core investment strategy.

More than 80% of respondents think that the use of smart beta indexes allows for the capture of factor risk premia, which is a prime motive for the investment. 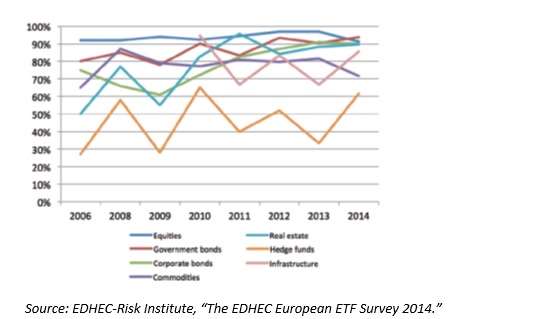 When EDHEC asked the respondents what types of ETF products they would like to see developed further, the leading answer was “equity emerging market” ETFs, then ETFs based on smart beta indexes, and ETFs based on factor indexes thirdly, at 43%, 37%, and 31% respectively.

As the recent report on this survey puts it: since there have been “a considerable number of product launches in the area of smart beta ETFs” the fact that investors see enough room for new launches in the same space for that to get a 37% response to the above question “may be explained by the fact that product launches have focused on relatively few popular strategies representing a small number of risk premia such as the value premium and defensive equity strategies.” So the creators of such indexes may want to try getting more, well … creative.  There is a market demand waiting for their creativity. About 7% of ETF assets are already linked to smart beta indexes.

What is a smart beta ETF? In essence, it’s an ETF that uses any weighting scheme for its components other than the standard weighting by capitalization. Smart alternatives can include equal weighting, minimum variance, characteristics weighting, etc. 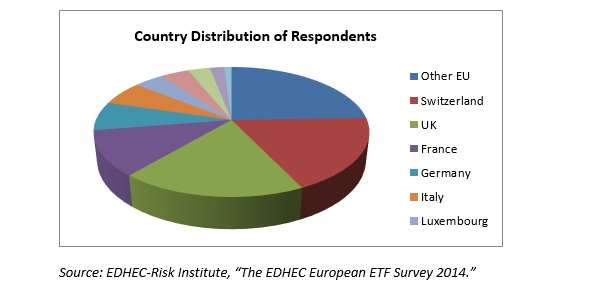 Old-school cap weighting can prevent an investor from taking advantage of all the recent work on the factors involved in portfolio allocation since Eugene Fama and Kenneth French published their landmark papers in 1992 and ’93. Fama & French introduced three factors to describe portfolio returns. In addition to the return of the market portfolio itself, which they took over from the capital asset pricing model, Fama and French accounted for size (because small caps tend to do better than they ‘should’) and for the price-to-book ratio. The most straightforward way of smartening-up one’s beta, then is by weighting allocations within an index, and so within an indexed fund, by each of the Fama-French factors, tilting the weights in favor of the smaller or low P/B ratio stocks in its universe.

But that is too simple, an example of the “small number of risk premia” already covered by smart beta offerings. The respondents mentioned above were clearing awaiting further developments. So, rocket scientists ... lean in.

Another point: the report makes it clear that respondents want full transparency on methodology and risk analytics They want that for all market indexes and tracking funds, but this want is especially pressing for the smart beta indexes, because they bring distinctive risks, and opacity – no matter how fervently justified by proprietary models – makes the evaluation of that risk tricky.

Who Were These Respondents?

The pie above indicates the distribution of the 222 respondents to this survey based on the country of their activity. EDHEC believes that geographical diversity, along with a “fair balance of different asset management professionals,” makes the survey results a fair representation of the views of European ETF investors.

In terms of the AUM of the institutions that have hired the asset management involved, the distribution is there is also balanced, with a little more than one-third of the respondents (37%) managing $10 billion or more, and a similar amount (40%) managing less than $1 billion.