As the half-way point of the year passes, we thought it would be a good time to take a look and see where things stand with the hedge fund and private equity markets, including five important takeaways from the first half of 2015: 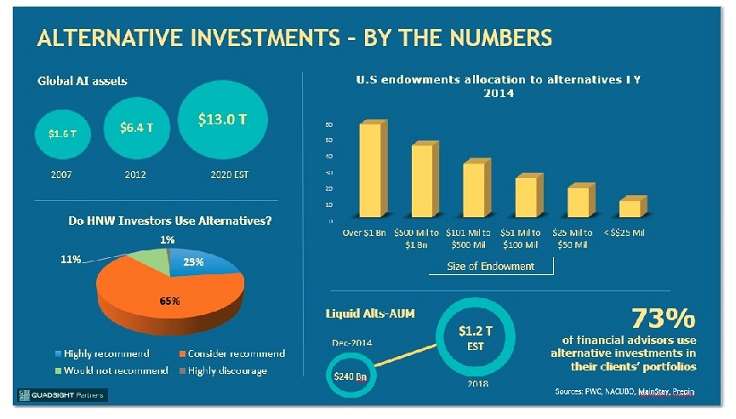 Capital raising continues to be strong across all asset classes. Total hedge fund assets topped $2.94 trillion in Q1 with $18.2 billion in new capital allocated according to HFR. The majority of those assets, though, continue to go to the largest managers, with only 22 managers controlling 25% of all assets. In fact, almost 70% of all new capital went to firms with greater than $5 billion in AUM.   This trend might be reversing though, as institutional investors are taking a closer look at smaller, upcoming managers. Indeed, 63% of FoHFs made an allocation to a start-up manager in 2014. With capital continuing to flow into the space, it’s only logical that the new generation of managers look to step up to join the ranks of those truly global, institutional level players.

For 1H-2015, Preqin reported that private equity managers closed on $234 billion representing 457 funds vs. $$272 billion and 580 from the same time last year. Real estate fundraising fared well in the first half with $60 billion raised. However, like their private equity brethren, the lion’s share of capital is being allocated to the largest managers, with mid-market funds struggling to capture assets. This follows the trend of investors consolidating their private capital allocations into fewer managers with larger tickets, in the attempt to gain leverage on fee reduction as well as better transparency.

PE exits are on track for a record breaking year, following the robust overall M&A environment. With over $185 billion of deals completed in the first half, 2015 could easily surpass 2014’s $264 billion. With higher interest rates on the horizon, corporate and sponsor activity continues unabated, driven by a potentially narrowing window as the Fed looks to increase the cost of capital later this year.

Venture-backed IPOs, though, have not followed suit. While the overall IPO market was fairly healthy in the first half, only 17 of the 116 IPOs so far in 2015 were venture backed. With a plethora of private financing available, companies are less in need of taping into the public markets – and the associated complications of a public listing. 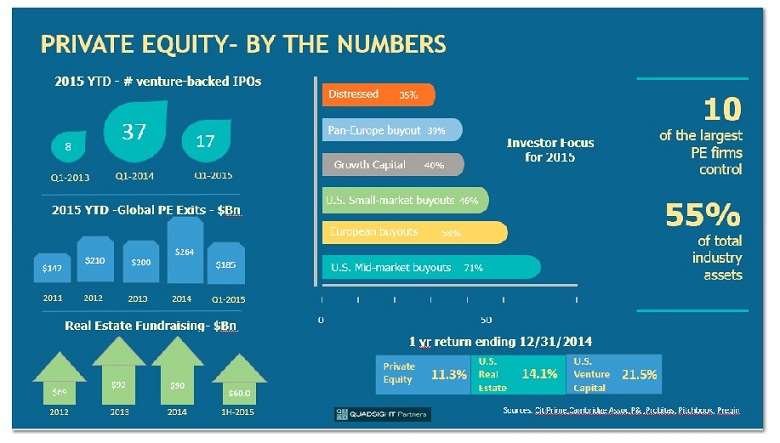 Increased valuations coupled with record-breaking M&A activity has fueled returns in the private equity and venture sectors. Venture, real estate and private equity posted returns of 21.5%, 14.1% and 11.3% respectively for the one year period ending 12-31-2014 according to Cambridge Associates. As noted earlier, exit opportunities for buyout funds remain healthy with deal making robust across all capitalizations. Although the IPO market for venture backed companies has remained muted, higher late-stage financing valuations (some would say too high) has allowed managers to mark their books accordingly. How this plays out for the rest of the year only time will tell as companies flush with capital may well continue to delay their public market debuts.

Meanwhile, hedge fund indices have caught up to the equity markets as tracked by the S&P 500 while easily outperforming the bond indices, as the potential for interest rates hikes from the Fed has dampened both liquidity and performance in the global fixed income markets. The CS Hedge Fund Index posted a 2.0% return YTD with the S&P coming in at 1.2% The equity L/S index had the highest return across all hedge fund sectors at 3.5%. Multi-Strat was second highest at 3.2%. The Barclays Agg, by comparison, posted a -0.1%. Trend following strategies fared the worst in the second quarter as geopolitical concerns, as well as the downturn in the Chinese markets, bumped up volatility considerably. Low beta strategies obviously fared better given this environment. 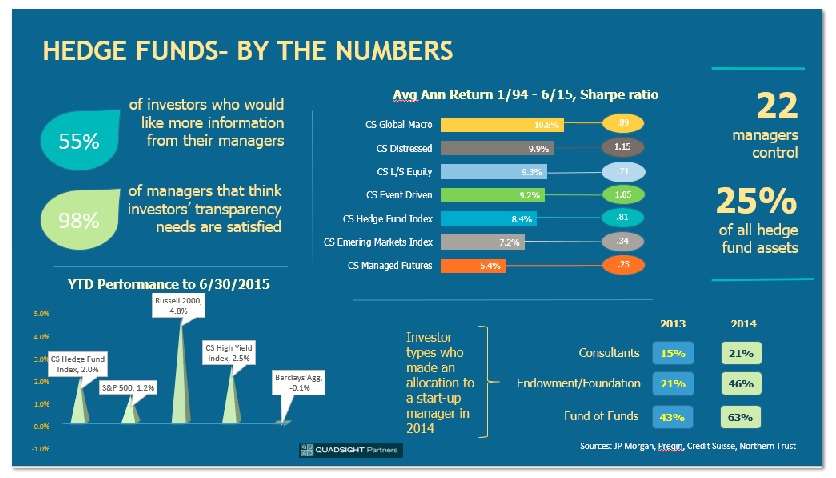 Liquid alternatives are here to stay

With over 73% of financial advisors using some form of alternative investments in their clients’ portfolios, the $240 billion invested in ‘liquid alts” at the end of 2014 is estimated to grow to $1.2 trillion by 2018. 109 new funds launched in 2014, with 57 new launches so far in 2015 according to DailyAlts. This torrid growth may slow, however, with the rise of a number of online platforms designed to give RIAs and wealth managers access to non-traded hedge and private equity funds. Firms like iCapital Network, CAIS, Artivest, Venovate and ACE Portal have begun to attract interest from the HNW community for their lower minimums and easier access. How these firms are able to engage the investor community successfully and validate their business models remains to be seen however.

Investors are still not satisfied with the level of transparency they are getting from their managers.

There is a major disconnect in the hedge fund industry as to what managers perceive as proper transparency and what investors think. In fact, 55% of investors would like more information from their managers while 98% of managers themselves think their investors’ information needs are complete, according to Northern Trust. Clearly finding some kind of middle ground between investors and managers is needed.

Andre Boreas is the CEO of Quadsight Partners, a marketing communications and PR consultancy solely focused on helping investment managers, wealth managers and service providers drive assets and achieve their business goals. He has spent over twenty years as an institutional investor, portfolio manager, marketer and product manager.