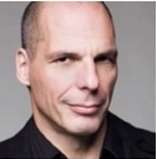 In the first part of our story, we observed that a tape of former Greek finance minister discussing the tumultuous events of his five-month tenure in that office has leaked out, despite the purported reliance on the “Chatham House Rule” amongst OMFIF members.

Further, we discussed that minister’s, Yanis Varoufakis’ discussion in this tape of a secret team he created, at the behest of the Prime Minister, Alex Tsipras. This team created an [equally secret] plan for a transition for Greece out of the euro, to a renewed drachma.

Finally, we mentioned that about 13 minutes into that 23:35 recording, Varoufakis stopped talking about the recent past and began sharing his views on the near future. That is where we pick up now.

Wolfgang Schäuble, finance minister in Germany, on the one hand, and the IMF on the other, have a common interest. The “IMF does not want to have to violate its charter again and to provide new loans to a country whose debt is not viable.” Schäuble also doesn’t want for the troika to extend loans to Greece because he wants a Greek exit (Grexit). He is, indeed, “hell-bent” on that result, said Varoufakis.

But Schäuble’s boss, Chancellor Angela Merkel “wants this thing [the new bail-out] to go ahead,” Varoufakis said. So with such internal divisions even within a single government there is no coordination among the creditors more broadly.

“The French are terrified … because they know that if they’re going to shrink their budget deficits to the level that Berlin demands, the Parisian government will certainly fall. There is no way that they can politically handle the ... austerity which is demanded of them by Berlin." At this point in the discussion Varoufakis emphasizes that he doesn’t mean “Brussels,” that is, the EU as such. He means “Berlin,” the capital of the dominant economic/financial power therein.

The French have been trying to buy time over the last couple years, in effect promising to reduce their deficit … somewhen in the future. Schäuble doesn’t think this stalling is adequate, but he “has a plan.” Varoufakis asserts that he knows this plan not through theorizing about it, but because Schäuble has described it to him explicitly. He doesn’t believe that the EU as it exists at present is sustainable. He believes it needs political/fiscal centralized authority which will make it more akin to a single nation state than it is at present.

A Grexit is supposed to “equip him with sufficient bargaining power, sufficient terrorizing power, in order to impose upon the French” that which they would otherwise resist in terms of encroachments on national sovereignty, the transfer of budget making powers to Brussels.

Asked about the role of the ECB and whether Mario Draghi had allowed it to become a political entity, Varoufakis said that Draghi has “handled himself as well as he could, he tried to stay out of this mire, the political mire.”

Not surprisingly, all of this has created a furor in European political/financial circles, a decent-sized sideshow to the full-on three-ring circus that is the continuing Greek crisis itself. After all, Tsipras has had to rely on votes from members of opposition parties to push through the bail-out proposals, in defiance of the results of the recent referendum. Yet he now has to convince those legislators, his de jure opposition and de facto allies, that he is committed to the efforts to make a third bailout work, that he doesn’t have a foot out the door via a “Plan B” such as that his former right-hand man has discussed.

Most of the furor has focused on the tape’s look backward, not its look forward. Perhaps there has been less said about his disclosures of Schäuble’s plan simply because that is more or less what everybody has thought anyway. At worst, Varoufakis portrays Schäuble as having said to him out loud what a lot of people independently inferred that he has been thinking more quietly.

But this is AllAboutAlpha, and our question is necessarily: how might alpha seekers play this sideshow? What will be the likely (but not yet discounted) consequences of the leak for asset prices?

My suggestion, then, is this: the leak of this interview, and the resentment it has created, likely at the margin increases the fragmentation of Greek politics. That fragmentation in turn increases the odds that neither Tsipras nor anyone else will be able to accumulate or preserve the political muscle necessary to keep Greece in the Eurozone. Something akin to Plan B will happen over time, as the Parliament becomes increasingly incapable of mustering the majorities for a Plan A.

A year ago, the ratio of the EUR to the GBP was roughly 1.25:1. With all the excitements since, that ratio is now about 1.40:1. I suspect the two currencies will get a good deal further from parity before they come any closer.