What Taper Tantrum?  And, Will Yellen Pull a Bernanke? 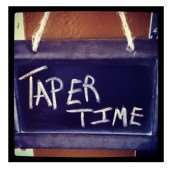 Convergence of developments in late August 2015 have forced me to think about the “Taper Tantrum” of 2013, whether we are seeing much the same thing again, and whether it will have much the same consequence – a pull-back in the declared intentions of the U.S. central bank.

One of these developments, of course, has been the wild roller-coaster ride of equities in the U.S. and for that matter in the rest of the world, beginning with the massive loss of value as reflected in any index, from the close of business Friday, August 21, to the opening bells of Monday morning, August 24.

Another: the pundits are talking about what this means for the expected Fed ‘normalization.’ The head of the New York Fed said Wednesday that “the decision to begin the normalization process at the September FOMC meeting seems less compelling to me than it was a few weeks ago.” That is carefully qualified. Presumably something can still be somewhat compelling while becoming less compelling than it once had been: though the precise metrics of compellingness are difficult to fix.

Third: things seem to have settled down in Europe. Greece has fallen into line under the Brussels-Berlin pressures. Although the agreement there could yet unravel, the internal politics of SYRIZA and the country it is at least nominally ruling at the moment no longer seems a flashpoint of continental, much less of global, significance. It is natural to ask: what does all that mean for U.S. interest-rates normalization?

Yet another recent piece of the puzzle:  a new monthly report from Deutsche Bank has a lot to say that reflects on Fed policy, of the recent past and the near future alike.

Before we get to that, though, let’s look at what DB says about hedge fund industry performance through July.  It was not sterling. The median performance of all strategies year to date is only 3.47, only slightly better than the MSCI World Index. In July alone the media fund gained only 0.31%, lagging behind the MSCI benchmark. 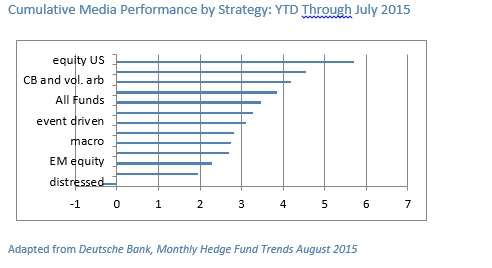 DB takes an unalarmed view about the sell-off in China, attributed in part at least to “idiosyncratic factors.” Also, price drops in commodities are seen as a necessary correction, warranted by weak fundamentals.

“The environment is generally supportive for risk assets,” though, and the sell-offs have provided “attractive entry points.” The old cliché is: be fearful when the world is greedy, be greedy when the world is fearful. This moment is a good time to be greedy: that is the “house view” at DB.

The report’s reasoning seems to take it for granted that the Fed will proceed with the planned normalization in September. DB says rates “under pricing of Fed guidance” are typical now of where they should be at a turning point in the rate cycle.

There has already been a large reallocation out of US equities through the first half of 2015, so hedge funds have limited their vulnerability in the event stock prices suffer from a rate hike.

Higher U.S. rates won’t help emerging market asset values, which have underperformed of late due to declining relative growth. There won’t be another “taper tantrum,” though, for a reason similar to that on which the bank is counting in the US equities arena: two years of outflows have limited vulnerability.

Personally, I have to wonder whether that expression, “taper tantrum,” has stood the test of time. Yes,  AllAboutAlpha remembers that the markets reacted in May and June 2013 to worries that then-chair Ben Bernanke and the Federal Reserve planned to taper their quantitative easing. But what we remember was not a major plunge, indeed it was only a little worse than a pause in the general upward movement of the time. On May 17, 2013 the DJIA was at 15,354.40, and by June 21st it was down to 14,799.40. The whole “taper tantrum” seems like a single day’s swing in late August 2015.

Of course that was enough to produce back-pedalling. On July 10 of that year Bernanke re-assured the markets that he understood that “a highly accommodative policy is needed for the foreseeable future. A week later he was a bit more explicit. He said that although “our asset purchases depend on economic and financial developments” they were not keyed in to any “preset course.”

Finally, returning to the late summer of 2015: I take it that the point of these analysts is that what didn’t spook the markets all that much a little more than two years ago isn’t spooking them at all now, that the causes that do have them spooked may be found elsewhere, and that the Federal Reserve won’t back down this time from its normalization course, which for reasons of passing style is no longer to be called “tapering.”

They may be right. We will see, within days, whether Yellen pulls a Bernanke.