According to the latest report from Eurekahedge, the hedge fund industry outperformed underlying markets in the month of August by 4.85%. The outperformance YTD is 3.19%, because the MSCI World Index YTD is down 1.90% for the year, while hedge funds are in the black 1.29%.

Nonetheless, looking at August in terms of its own numbers: it was bad. The chart at the top of this entry indicates just how bad, on a region by region basis. The red bars represent July’s HF industry performance in various mandate regions, while those in blue represent August. The blue is worse than the red, everywhere. Also, the blue is in negative territory everywhere.

It paid to be long volatility in August.  Also, fat-tail trades came in.

On a year-to-date basis, though, the CBOE-Eurekahedge Relative Value Index remains the best performer of these four, and tail risk is the worst. Relative Value is up 2.48% YTD, followed by short vol, which has gained 2.11%.

Commodities and emerging market currencies took hits in August, as did the hedge fund strategies that depend on them.  The report’s authors are of the view that the U.S. Federal Reserve may back off of the rate hike, the “normalization” so often spoken of. They write of it as a “fabled rate hike” [italics added], one which may “continue to elude us.” 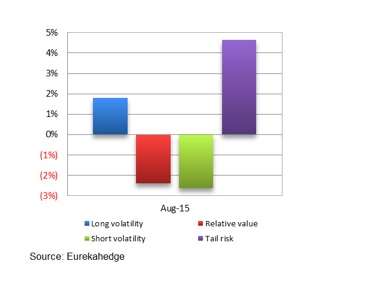 Year to date, long/short equities lead the pack, with a gain through August of 2.7%, followed by arbitrage at 2.5%.

Eurekahedge also included this month a timely special report on Greater China Hedge Funds. The officials of the People’s Republic have been intervening actively through a series of interest rate cuts,

and municipal debt-swap programs. They have also eased banking rules in an attempt to render the economy more liquid.

Greater China mandated hedge funds grew rapidly at the start of 2015 as the equity markets rallied on the strength of such news.  Of course, one will hereafter look back at the early months of 2015 through the lens created by the turmoil of August: when China’s equities posted double digit losses, Asia ex-Japan’s HF industry net growth was -3.8.

The Special Report updates its readers on the continued dominance of Hong Kong as the place to headquarter your China mandated hedge fund. More than 80% of such funds have their head office in that city.

Eurekahedge prophecies that hedge funds may take advantage of arb opportunities through the spread between Shanghai A shares and Hong Kong H shares in the years to come. This could fuel a resurgence in arb and relative value strategies generally.

Eurekahedge’s report concludes with a link to a video interview with Dr. Leung Wing Cheong, the CEO and CIO of InnoFusion Capital Management Ltd., (which is itself Hong Kong located.)

Dr. Leung is a particle physicist by training, educated at Columbia University.  He founded InnoFusion ten years ago. It’s a multistrategy fund, with a market neutral orientation.

The interviewer, Alexander Mearns, asked Dr. Leung to expand on some examples of profitable trades that InnoFusion has made that might be “helpful to our viewers.”  In that context, Dr. Leung raised the issue of HK/Shanghai arbitrage. InnoFusion is in a position to benefit from the price inefficiencies encoded by the A/H distinction. But Leung also suggested that the days of such profits are coming to an end: that this has become a crowded trade.