FCStone Financial on Grains and Volatility 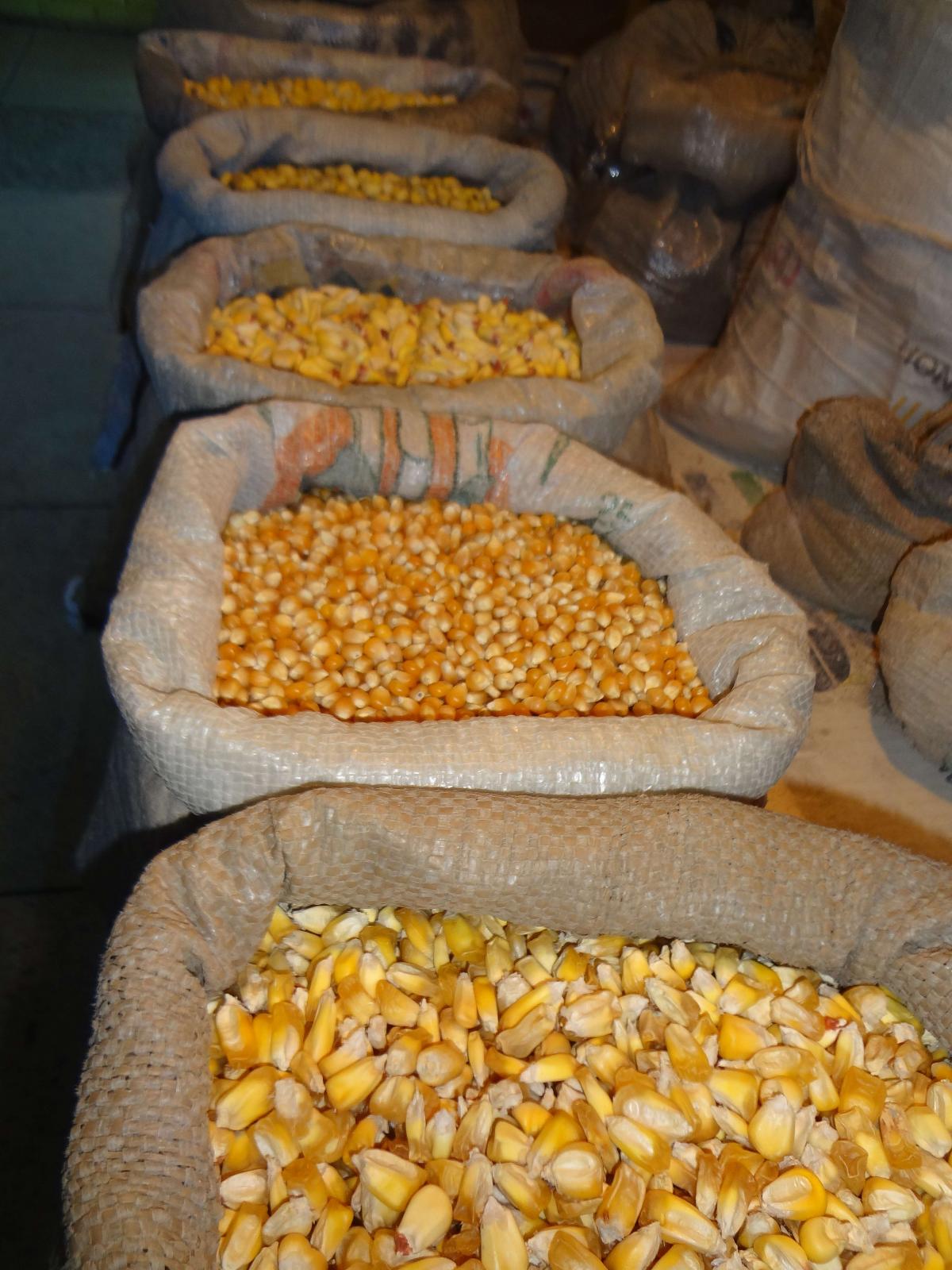 A new white paper written by Arlan Suderman, chief commodities economist for INTL FCStone Financial, discusses the consequence of the strong dollar of the last two years on the volatility of grain prices, focusing especially on corn.

Before this period, there was the global financial crisis, and the “quantitative easing” on which the Federal Reserve settled as a consequence, which was very bad for the U.S. dollar. A dollar bought only 0.66633 euros on November 30, 2009. After a brief upward move in the spring of 2010, the dollar fell back again, to the 0.70 neighborhood, by spring 2011. It had made up a little ground by June ’14, but only that summer did it finally begin an impressive upward trajectory.  It reached .90 by the end of February 2015 and has been between .94 and .94 ever since.

This is not just a matter of the bilateral relationship with the euro. Against the GBP, at least the most recent part of that pattern looks much the same.  The dollar found a recent low against the pound of 0.582 on July 4, 2014. It has moved up steadily since then, and one USD now buys 0.71 of a GBP.

Consequences of a Strong Dollar

This trend has hardly gone undiscussed. But as Suderman observes, “most of the news coverage and analysis has focused on impacts to the oil and mining industries.”  This leaves him wondering: what about grain? 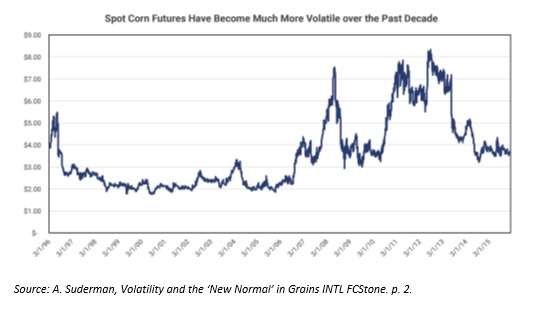 The above chart, showing the price for bushel of corn in dollars, convincingly shows that the price of that particular grain has become much more volatile in recent years.  In the period from March 1999 through 2006 the spot price was almost always between $2 and $3 a bushel. How boring!

From China to Brazil

The world of corn decided not to bore us any longer starting in 2007, when ethanol and China together started increasing world demand in a sustained way.

The Chinese government in that period increased its support for its domestic corn producers. That meant, though, that Chinese pig farmers didn’t want to feed their pigs Chinese corn any longer – the stuff had become too pricey, fit only for human consumption. Their pig farmers looked to cheaper imported corn as their new feed, and that increased world corn prices.

Corn prices hit a pre-crisis peak, and then fell from it, as the above chart indicates, but the fall never brought the price back to those old $2 to $3 dollar domains. Rather, the price settled in for a time between $3 and $4. But it didn’t get to settle in for long. There was another surge from 2010 until a peak in 2012. The general direction of prices has been down since then, with a sharp fall-off in mid-2013.

Not in Suderman’s view coincidentally, the Fed’s easing program had “essentially concluded” late in 2012, and data was suggesting “that the dollar was beginning to firm up” by the top of that sudden cliff in the above chart. 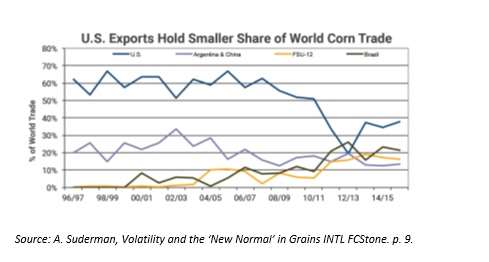 For the U.S. farmer in particular, the consequences of a strong dollar are challenging, because continued strength in the dollar means that the price of corn and other grains as measured in other currencies is soaring. The price of a bushel of corn in the Brazilian real, for example, is near a record, which as Suderman notes “will likely continue to spur more production from the country’s farmers.”

The initial decline Suderman attributes to “long term trends.” It came about despite the cheapening of the dollar during that period. The short-term problem created by the newly rejuvenated dollar, though, is that it interferes with the goal of clawing back that lost market share. The United States, he says, will be at a competitive disadvantage in grains “for years to come.”

As a consequence of the stronger dollar, along with the increased volatility in prices, the changing world picture, and the political conflict over ethanol subsidies, margins for error for U.S. producers are smaller than ever before.