Preqin on the PE Outlook 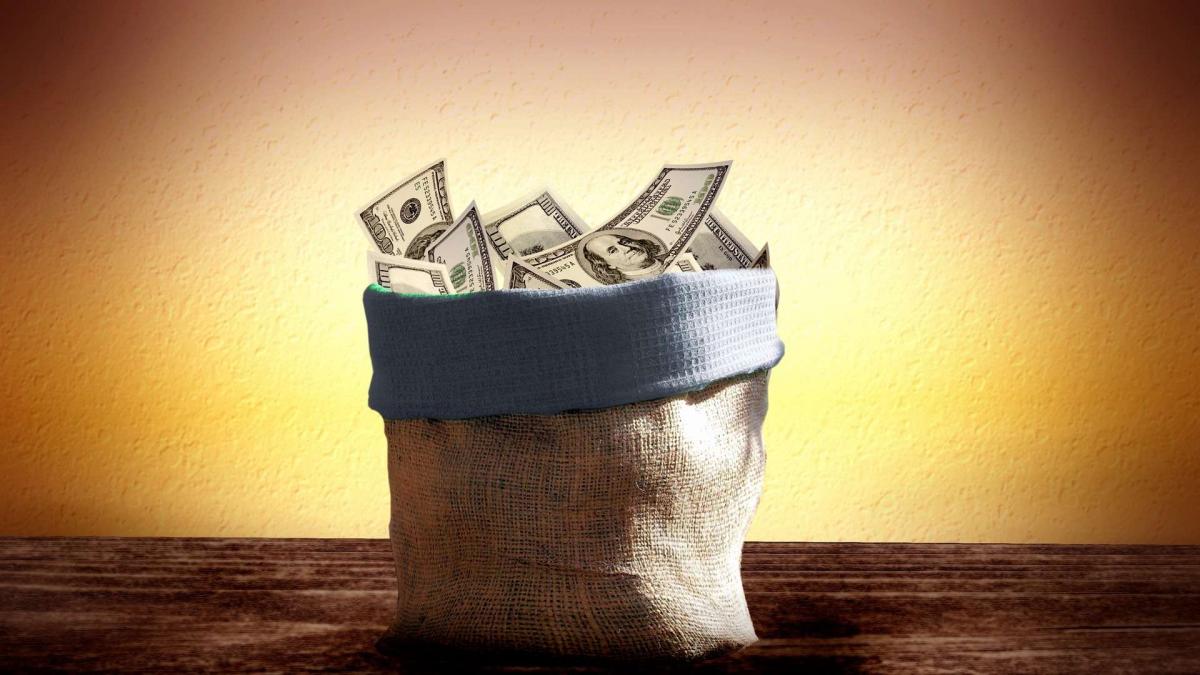 Preqin has issued a report on the near term outlook for private equity based on a recent (November 2017) survey of more than 350 PE firms around the globe.

Asked what is the biggest challenge facing them in the coming months, the most common response was: high company valuations. The fact that so any PE firms have so much "dry powder" has meant intense competition for assets and that in turn has helped drive up pricing. 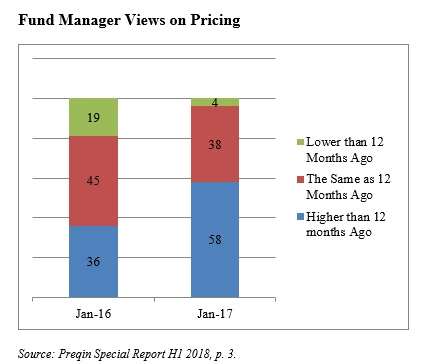 The second major concern of managers, one to which high valuations make an obvious contribution, is: performance. More than a third (35%) of managers report that they are lowering their expected/targeted returns for future funds, because the high valuations for whatever buying choices the new fund will make will reduce the value they can expect to add. Only 11% of respondents indicate that they are raising their targets.

Preqin observes that “a side effect of the difficulties fund managers are facing when sourcing attractive investment opportunities is the need to review more of them: 46% of respondents reviewed more opportunities per investment in 2017 compared to 2016.” Only 11% said they had reviewed fewer opportunities.

The report indicates, though, that managers expect a strong exit environment in 2018. This is the plus side of high valuations. Eighty-nine percent of respondents say either that exits will increase over the year or that they will hold constant. 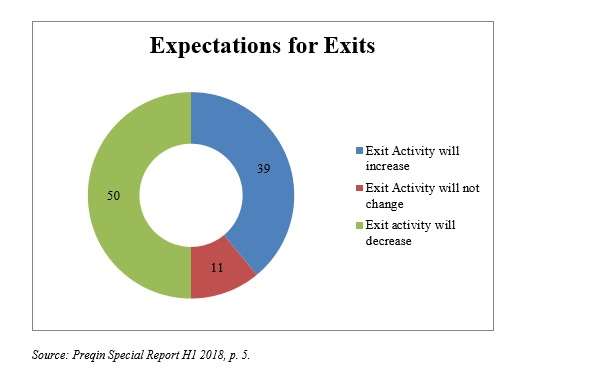 Managers expect that the easiest exits in the year to come will be via trade sales or IPOs, in contrasts to restructurings or sales to general partners.

Asked to speak to the prospects of exits for their own individual firms; managers said much the same as when they were asked about the market as a whole. A majority (56%) of fund managers plan to make more exits in 2018 than they did in 2017, though only 8% said that will be “significantly” more.

Meanwhile, investor demand for PE has increased of late. In 2017 as in 2016, the increase in demand came in particular from family offices. The second most important source of increased demand last year was the funds of funds world.

As noted above, Preqin’s respondents come from around the globe. Breaking down responses by geography one sees that the most robust growth in investor demand has been in Asia. Half (50%) of the fund managers there report that investor appetite has increased over the last 12 months, only 2% say that it has gone in the opposite direction.

Latin America is at the other extreme. Only 13% of GPs observed an increase of LP demand from Latin America, with 7% saying ”decrease” and the rest no change.

For Europe and North America, the “increase” numbers are, respectively, 44% and 45%.

Despite the increase in investor demand, competition for a chunk of that demand remains very fierce, given that supply is also rising, so that there now exists a record number of PE funds in the market (2,485 as of this month).

Managers are going to be bringing new vehicles to market, both the traditional commingled funds and “alternative structures” that, as Preqin says, respond to “an increasingly sophisticated investor universe looking to maximize returns and reduce costs.” These alternative structures include joint ventures, separate accounts, and co-investment opportunities.

Two years ago, 52% of respondents offered co-investment opportunities to investors. One year ago, that number was up to 57%. In the latest survey it is up again, top 64%.

“For many fund managers,” Preqin observes, “the benefits, such as building a stronger relationship with investors and gaining access to additional capital for deals, can help outweigh the costs, such as difficulties that may arise in executing deals.”