We recently looked at the number of women CIOs at big endowments*. Among 109 North American endowments over $1 billion we identified twenty (18 plus one director of investments and one CFO who liaises with their OCIO providers).

For this issue we also took a look at the mid-sized schools (in the $500 million-to $1 billion bracket), to see if the situation is any better.

Unfortunately, that's a no. We found 10 females among 85 schools. That's just 12%--a significantly lower representation that among the bigger schools.

Here they are, ranked by AUM: 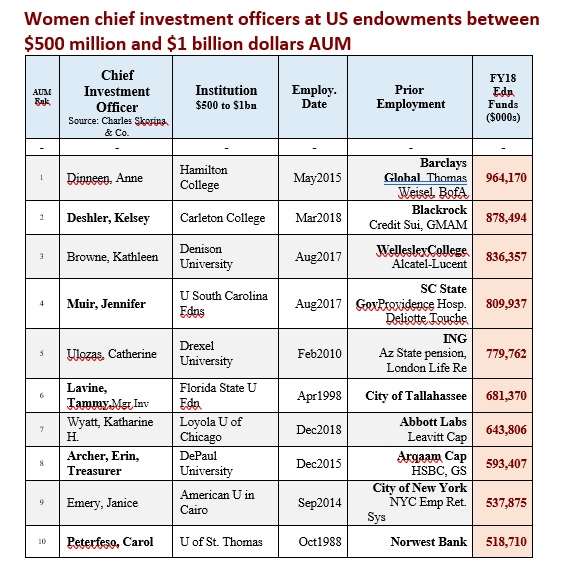 Twelve percent in this group is not as bad as it sounds. That's because mid-size endowments are less likely to have dedicated in-house investment staff - either men or women.

Many prefer to outsource, or to use a committee-and-consultant model without an internal investment office.

But it's still not a great number.

Although we haven't done an exact count, we should note that women are well represented among professional slots at the major OCIO firms and consultants. These are good jobs, and often a gateway to CIO jobs (although they usually don't pay as well).

This may somewhat mitigate the overall situation for women jobseekers.

That's the static picture, but the trend is even more important.

Is that gap worsening, or about the same over recent years?

Unfortunately, it seems to be widening.

Looking at recent turnover, 9 departing female CIOs have been replaced by men, while only 3 were replaced by other women.

Just one departing male was succeeded by a female.

These turnovers are detailed in the next chart: 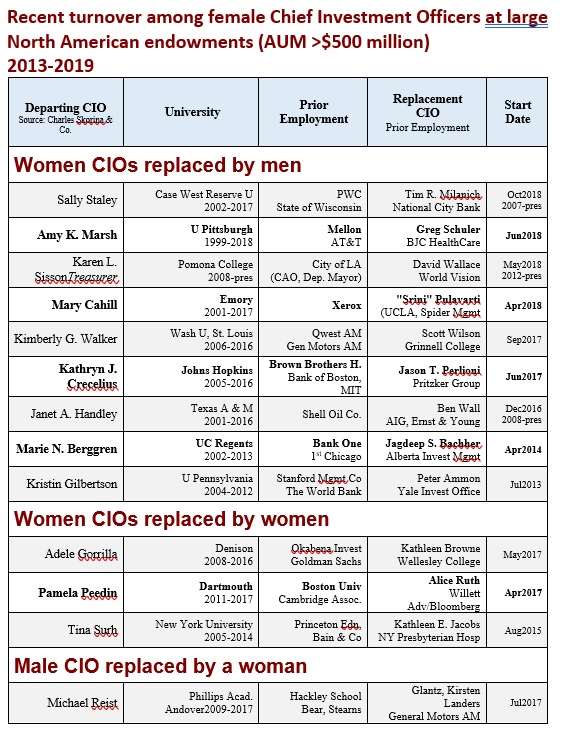 This does not bode well for the many ambitious female money managers competing for that brass ring.

Frankly, we don't understand it.

Keep in mind that we're talking about politically-correct academia. Their board members are publicly and prominently committed to hiring and promoting women. Charges that they are favoring male candidates over equally-qualified women seem facially implausible.

We've looked at various factors, hoping to uncover an explanation.

Could it be performance? Not likely!

As we show in our latest five-year endowment performance study, women CIOs are nailing it. Paula Volent has been outperforming the revered David Swensen (her mentor).

Colette Chilton, Alice Ruth, Sandra Robertson (at Oxford) and many others are among the top multi-asset institutional managers in the world and they are making their schools lots of money.

Perhaps there are other factors? For example, only 18% of all CFAs and only about 36% of all MBAs are women in recent years. Successful CIO applicants typically have those credentials, so that could be a factor.

Still, that does not fully explain the clogged pipeline because, at the director level, there are many qualified female investment managers ready.

*We should mention Sandra Robertson the CEO/CIO at Oxford's $4.3 billion endowment, largest university endowment in the U.K. Oxford's first and only CIO, she has earned an impressive ten percent annualized return from 2007 to FY Dec 31, 2017. But, she prefers to stay under the radar and let her performance do the talking, so we did not include her in our north American performance survey.

Charles Skorina works with leaders of Endowments, Foundations, and Institutional Asset Managers to recruit Board Members, Executives Officers, Chief Investment Officers and Fund Managers. Mr. Skorina also publishes THE SKORINA LETTER, a widely-read professional publication providing news, research and analysis on institutional asset managers and tax-exempt funds. Prior to founding CASCo, Mr. Skorina worked for JP Morgan Chase in New York City and Chicago and for Ernst & Young in Washington, D.C. Mr. Skorina graduated from Culver Academies, attended Michigan State University and The Middlebury Institute of International Studies at Monterey where he graduated with a BA, and earned a MBA in Finance from the University of Chicago. He served in the US Army as a Russian Linguist stationed in Japan.