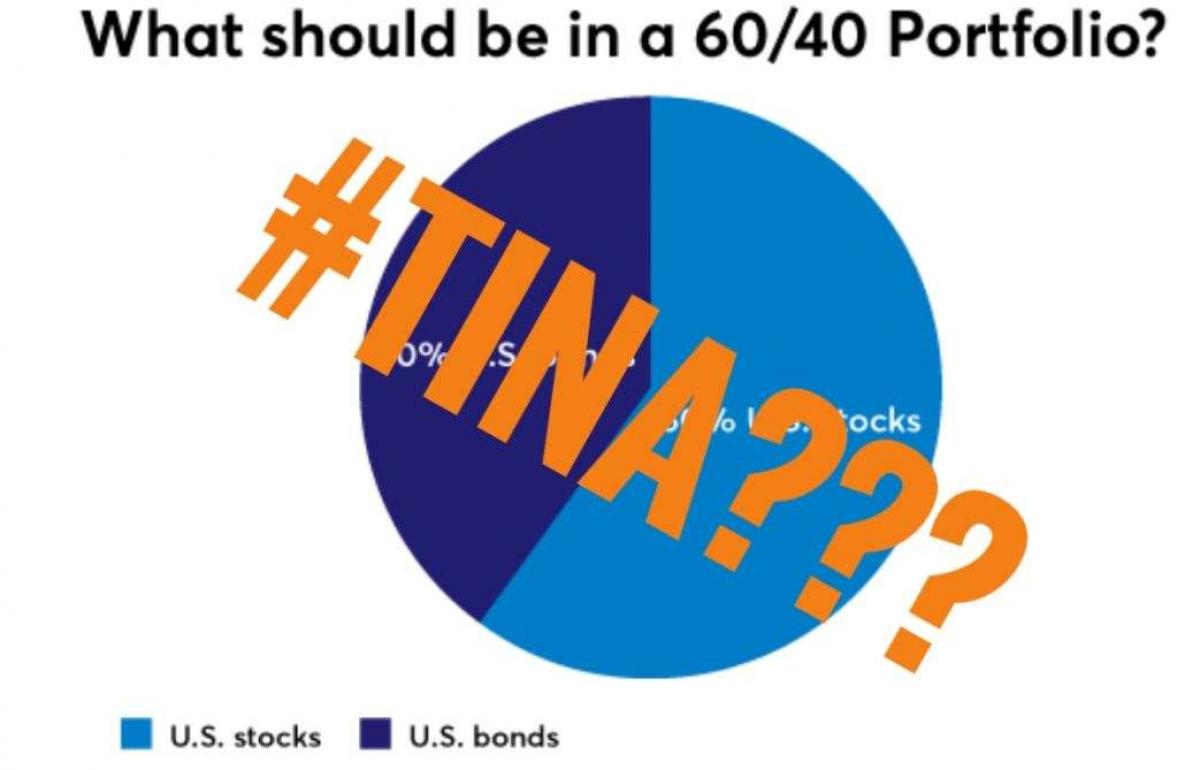 By Bill Kelly, CAIA Association CEO The “lower for longer” interest rate policy of the G4 Central Banks has morphed into what seems like “lower forever.” The 35-year bull market run in the fixed income space is over, and the thought of this 40% slice of the allocation pie producing anything close to equity-like returns will only be found in fantasy land. In fact, on a real basis, a zero or negative return from traditional fixed income is almost a given into the foreseeable future. As for the 60% allocated to equities, a good part of that allocation has come with many investors holding their nose, mostly because of #TINA—not a reference to the Queen of Rock ‘n’ Roll, but to the Twitter-trending hashtag ‘There Is No Alternative.’ The obituary for our parent’s approach to asset allocation has been written many times over, yet the intended target has found its inner Mark Twain, and the refrain seems to indicate reports of the 60/40’s death to be greatly exaggerated. Look no further than the university endowment space, and the vaunted Ivy Leagues who have always been held out to be the most astute investors amongst us. Yet, not a single one of the investment offices of these 8 prestigious universities were able to outsmart the 60/40 allocation for the 10-year period ended fiscal 2018 according to a recent report from Markov Processes International. This is the first time such an event has happened under any recorded data, but those CIOs can likely breathe a sigh of relief as a recurrence in 2019 is highly unlikely. A roll-off of the 2009 numbers, accounting for a disproportionate share of the decade long underperformance, was most likely due to the smoothing effect of private market pricing as risk assets recovered from the depths of the GFC. This phenomenon will not be as pronounced (or will be a positive contributor given any sudden correction) in subsequent periods as the gap between public and private market pricing normalizes. A 2018 aberration? The Vanguard Balanced Index Fund clocked in at an impressive 9.5% in the first quarter of 2019, the best single quarter for the 60/40 space in over a decade. #TINA indeed… An interesting research paper by the economist Dr. Bradley Jones entitled Rethinking Portfolio Construction and Risk Management might be a timely read for perspective and reflection. While it remains relevant in the current market cycle, you will note that it was written about seven years ago. Amongst other points, Jones makes the case for returns being regime dependent and not normally distributed. Hard not to agree that the central banker intervention we have experienced is anything but ‘a regime dependent event,’ and normal distributions have all but been forgotten in the prolonged risk-on trade post the GFC. Dr. Jones goes on to make a very compelling case for building a more diversified portfolio across uncorrelated risk premia rather than asset class silos. Integral to that thesis, are the parallel thoughts of fusing together long-term risk premia, notably the hallmark of the endowment model, along with the introduction of exposures that will focus on managing tail risk. Maybe those Ivy Leaguers really are on to something after all? Very few of us can comfortably ascribe to the thought of annualizing the Q1 2019 return for the 60/40 model portfolio, or the likelihood that the market will move sideways for the balance of this year (“sell in May and go away”), which would still represent an above-trend outcome for this full year. Had anyone listened to the advice of Dr. Jones back in 2012, at this point they would probably have written it off as the musings of another misfiring econometric model, but that is beside the point as we are likely entering the winter of this current regime-based run. Stop listening to #TINA and be more informed about your portfolio and where it sits inside of your longer-term comfort zone. You might actually find that ‘There Maybe Is A Better Alternative’ #TMIABA.  Is that #TMI? I don’t think so… Seek diversification, education, and know your risk tolerance. Investing is for the long term. Bill Kelly is the CEO of CAIA Association and a frequent contributor to Portfolio for the Future. Follow Bill on LinkedIn and Twitter.