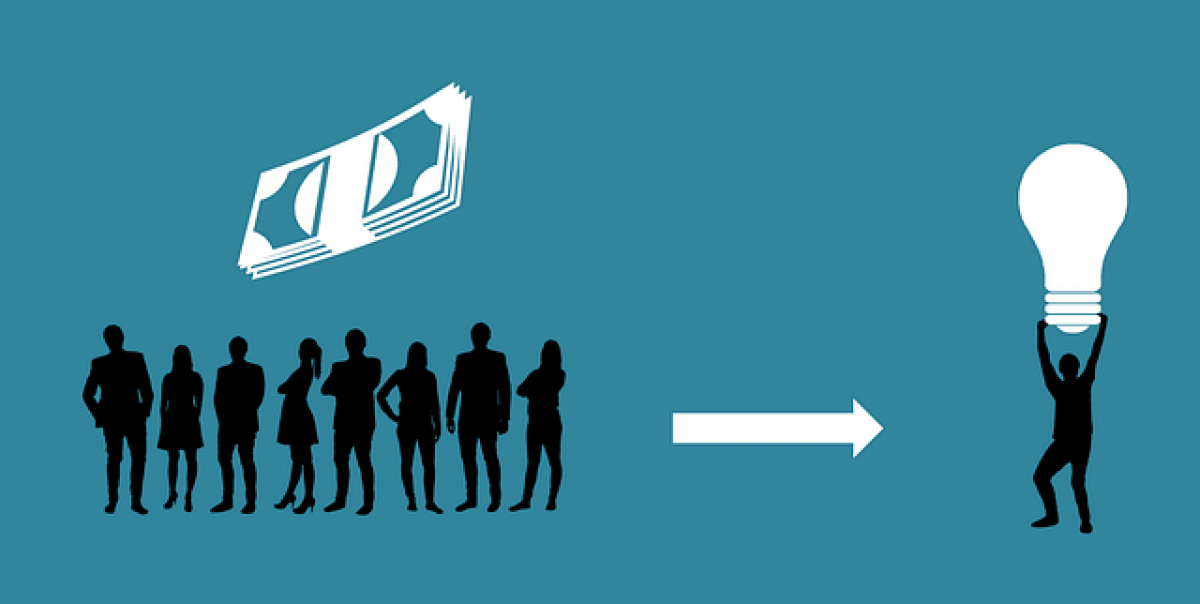 By Victoria Dobrynskaya, PhD, associate professor of Finance at National Research University Higher School of Economics Investments in reward-based crowdfunding campaigns give backers a variety of benefits, such as enjoyment in participating in a creation of a new product, being a part of a similar-minded community, altruistic pleasure of helping others, or a non-altruistic pleasure of receiving a personalized or a limited-edition product or non-physical rewards (e.g. a visit to the production or a lunch with the creator). Apparently, backers in reward-based crowdfunding are also compensated by high financial returns in addition to non-financial benefits, and crowdfunding can be used by small individual investors as an alternative investment. Backers receive the product significantly cheaper than the price, at which the product appears in the market. Crowdfunding is a popular way of raising initial funding for start-ups and small businesses. It is defined as raising relatively small amounts of money from relatively large number of people over the internet to fund a cause, project, company or goal. Crowdfunding is usually done on a specialized website (platform), and there are four major types of crowdfunding: reward-based, equity-based, lending-based and donation-based. The reward-based model offers non-pecuniary tangible or intangible rewards in exchange for the investment, the equity-based model offers any shareholding contractor a revenue sharing scheme, the lending-based model provides a credit contract without an intermediary, and the donation-based model offers a donor contract without any physical or monetary rewards. The most established and popular type is the reward-based crowdfunding, where examples of rewards include a product itself, a ticket to a concert, a lunch with the creditor, a signed DVD, a labelled T-shirt, an honor to name a game hero. In this paper, we look at reward-based crowdfunding from the perspective of an investor (backer, pledger). Is it pure altruism to finance others’ projects? There has been some debate concerning investors’ motivation for participation, particularly in reward-based crowdfunding. Gerber et al. (2012) conducted a series of interviews with crowdfunding participants and revealed two types of motivation: intrinsic and extrinsic. Intrinsic motivation includes a desire to help others, to be a part of a similar-minded community, to support a creator or a cause. Extrinsic motivation is to “collect rewards”, which generally means the desire to being the first to receive a product or getting a limited-edition or personalized product. According to previous inductive research, project pledgers also enjoy getting involved in, and supporting projects that offer the perception of a shared identity or motivated by social image and reputation. Such non-financial motives are perceived to be more important for investors in reward-based crowdfunding than the reward itself (Collins and Pierrakis, 2012). However, other authors provide survey evidence in favour of the opposite. Their results show that “the decision to pledge to a project was positively predicted by individuals’ interest in receiving rewards, as well as by their need to trust the entrepreneur, whereas non-financial motives, such as help others and support ideas or be a part of a community were not significant” (Cholakova and Clarysse, 2015). We contribute to this debate by studying one more type of motivation – the financial motivation of getting the product cheaper than in the general market. We are the first to quantify the financial returns on reward-based crowdfunding projects and to show that such projects are, in fact, quite profitable for backers. Whereas a financial return is an obvious motivation for equity-based crowdfunding and crowdlending, where the average annualized returns have been estimated at 8.8% (Signori and Vismara, 2016) and 7.7% (Adhami et al., 2019), respectively, the reward-based crowdfunding is generally not viewed as an investment opportunity with high financial returns, and the main motivation is perceived to be of non-monetary nature. However, we show that the average annualized unconditional return on reward-based crowdfunding, calculated as the percentage difference between the monetary value of the received product and the pledged amount, is higher than in equity- and lending-based crowdfunding—11.5% (see the table). 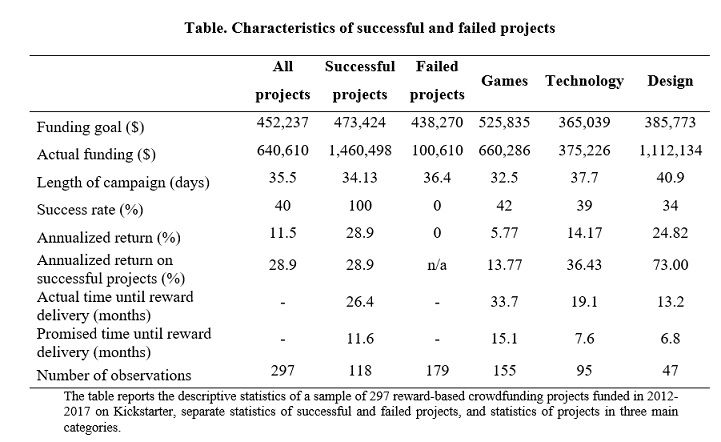 Backers benefit from so-called “behavior-based price discrimination” between backers and regular customers. Moreover, we find, that the average return on successful projects, i.e. projects which achieved the funding goal, is even higher–about 30%. Therefore, pledging money near the end of the crowdfunding campaign, when it is easier to estimate the probability of success, is a profitable strategy, which many backers, in fact, follow. A financial return is an additional important type of extrinsic motivation, which has not been identified in the previous interview-based or survey-based studies. We collect data on all projects posted on Kickstarter, the biggest global reward-based crowdfunding platform with more than 17 million backers, who have pledged about $5 billion in total. Kickstarter has a satellite tracker site, kicktraq.com, which stores information on past and present, successful and unsuccessful campaigns. We sample the projects with a funding goal above $250,000, and actual products to be delivered in order to be able to quantify the returns. Our sample includes 297 projects in Games, Technology and Design categories, funded during 2012-2017. Kickstarter uses All-or-Nothing funding model, which means that if a funding goal is not reached during the campaign, the funds are returned to the pledgers, and the creator receives no funding. 60% of the projects in our sample failed to reach the funding goal and yielded zero return to the pledgers. The other 40% of the projects were successful and generated an average return to investors of 28.88% per annum. The cross-sectional analysis reveals that the most profitable projects belong to the Design category, followed by Technology, followed by Games. The Games category is the biggest category with the highest number of projects (155), the highest average funding goal ($526,000), the highest rate of success (42%), the longest time until the rewards delivery (34 months) and the lowest annualized unconditional returns (5.77%) and the lowest return on successful projects (13.77%). It seems to be the least attractive category for investments. The Design category is, on the contrary, the smallest (47 projects), the fastest in terms of rewards delivery (13 months) and the most profitable, despite a lower success rate (34%). The unconditional return is 24.82% and the average return on successful projects is 73%. Such a huge return is, perhaps, the reason why this category is highly overfunded. The actual funding exceeds the funding goal by 3 times, on average. The Technology category is in between with the descriptive characteristics similar to the average ones on Kickstarter. The unconditional return on Technology projects is 14.17%, the success rate is 39%, and the return on successful projects is 36.43%. We also study various project characteristics which could potentially predict the returns on successful campaigns. However, the only significant predictor we find is the length of the project – the (promised and actual) time between the start of the project and the delivery of the rewards. Short-term projects tend to yield higher annualized returns than longer-term projects simply because the rewards are received sooner. Whereas the previous research on crowdfunding is based on surveys, interviews and designed experiments, this empirical study of finished projects on Kickstarter provides quantitative evidence on the profitability of crowdfunding campaigns and suggests one additional important type of motivation of backers – the financial motivation. Together with earlier findings on factors, which determine the success of a crowdfunding campaign (e.g. quality of the project and geography, the social capital and activity in social networks of the creators, the funding goal, the number of updates and the length of the campaign), the findings of this study generate further recommendations for investors in reward-based crowdfunding projects. References Adhami, S., G. Gianfrate, and S. Johan (2019). Risks and returns in crowdlending. Cholakova, M. and B. Clarysse (2015). Does the possibility to make equity investments in crowdfunding projects crowd out reward-based investments? Entrepreneurial Theory and Practice, 39(1), 145-172. Collins, L. and Pierrakis, Y. (2012). The venture crowd: Crowdfunding equity investment into business. London: NESTA. Gerber, E.M., Hui, J.S., & Kuo, P.Y. (2012). Crowdfunding: Why people are motivated to post and fund projects on crowdfunding platforms. Northwestern University working paper. Signori, A., and S. Vismara (2016). Returns on investments in equity crowdfunding. Victoria Dobrynskaya, PhD, is an associate professor of Finance at National Research University Higher School of Economics vdobrynskaya@hse.ru