Global Macro: Masters of the Universe? 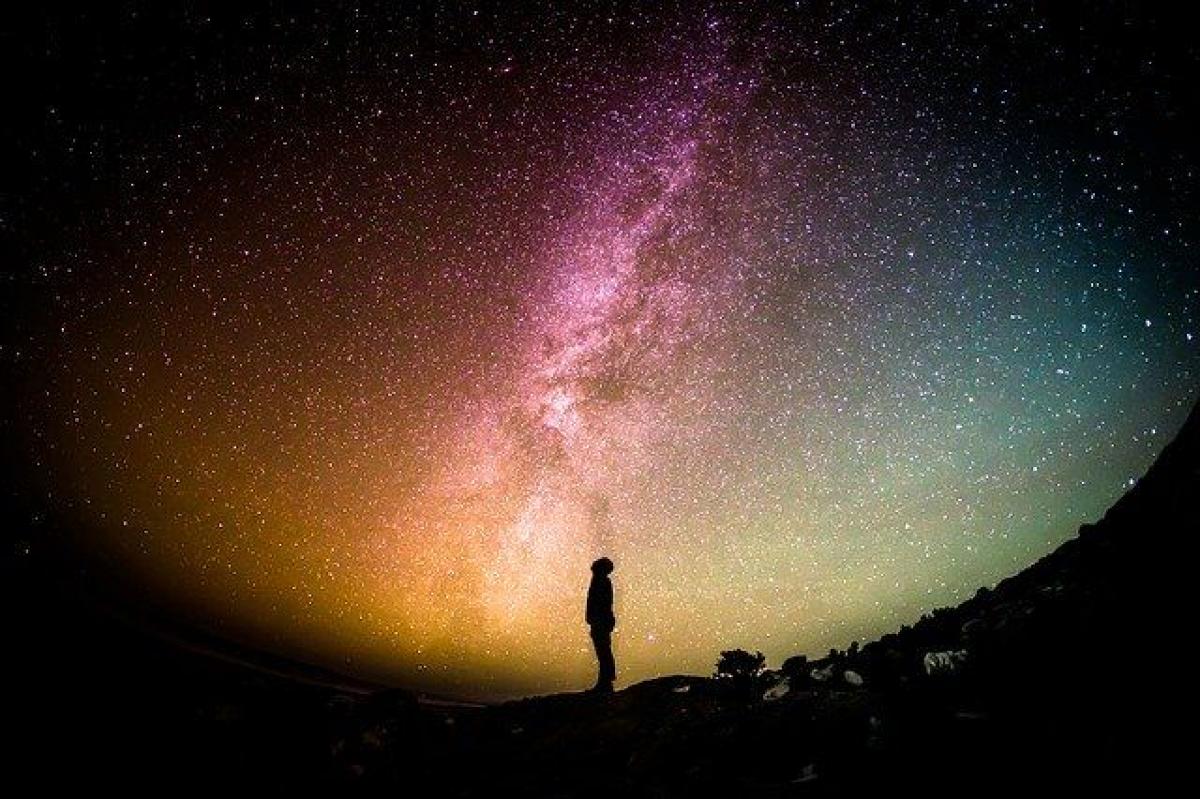 He-Man and the Masters of the Universe was a popular TV cartoon show in the 1980s, where a handsome Prince Adam was battling the evil Skeletor for control of the universe. Each time Prince Adam held the Sword of Power and boomed “By the power of Grayskull”, he transformed into He-Man and became the most powerful man in the universe.

Although none of them is as good-looking as Prince Adam, the investment industry also has its masters of the universe, namely global macro investors like George Soros, Stanley Druckenmiller, or Ray Dalio. Their power is the ability to invest in any asset class under the sun and take profitable long or short positions. It is probably the most thrilling job in finance.

However, global macro investors are not without foes. In their case, there is not a singular nemesis like Skeletor, but more a hydra-like creature attacking them with new regulation, technology and machines, unprecedented central banking policies, amongst other weapons. Old and aspiring masters of the universe also frequently self-destruct, especially after winning streaks that boosted their egos. The past is littered with bodies and fallen stars are quickly forgotten.

Given that markets are continuously becoming more efficient, it is questionable if old-school global macro investors can still provide value to capital allocators. In this short research note, we will explore global macro hedge funds.

Global macro is a classic hedge fund category that has a long and colorful history. The most well-known global macro investor is likely George Soros, who became famous for making $1 billion of profits in 1992 when shorting the British Pound (consequently taking the opposite side to the Bank of England) and being listed second for generating the most money for his clients. Since its inception in 1973, Soros Fund Management generated more than $43 billion in profits according to a ranking by LCH Investments, which is an astonishing amount for a small firm.

All major hedge fund data providers have indices that measure the performance of global macro hedge funds. We focus on discretionary rather than systematic funds in this analysis, although some fund managers utilize both investment frameworks. Ultimately, we are interested in the hedge fund manager that is bound by the fewest rules. He (rarely she) can allocate across asset classes, invest for the short- or long-term, and take long or short positions.

Indices are available in two flavors: equal- (“EW”) or asset-weighted (“AW”). We observe that all indices shared the same trends in performance in the period between 1993 to 2020, albeit with important difference in magnitudes. The indices are comprised of more than 100 funds as of today, but were more concentrated in the early years. Funds report their returns to all databases to engage with as many hedge fund allocators as possible, so the similarities in performance are somewhat surprising given the diversity of hedge fund managers. 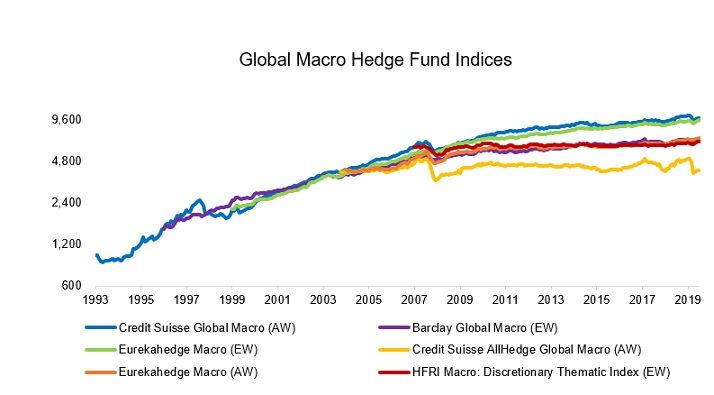 The indices from the various hedge fund databases also highlight that most of them have flatlined since 2010, highlighting the challenges of generating alpha in recent years.

We aggregate the equal- and asset-weighted indices into two composites by equal-weighting them and calculate the five-year rolling returns that show stellar historical returns and more modest ones recently. Many other hedge fund strategies like merger or statistical arbitrage show the same consistent decline in performance.

It was never easy to be a master of the universe, but probably never tougher than currently. 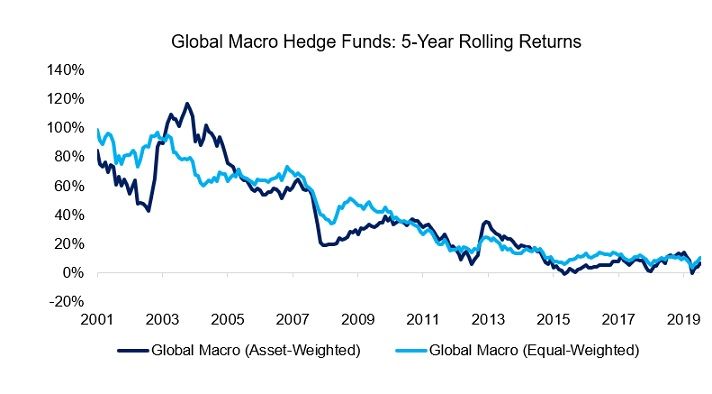 However, although the annual return of global macro funds is a fraction of what it used to be, these hedge funds still can create value as long as returns remain positive and uncorrelated to traditional asset classes.

Measuring the correlation of global macro hedge funds to US equities and bonds highlights 0.33 respectively 0.18 in the period from 1999 to 2020, which should have resulted in attractive diversification benefits for an equity-bond portfolio.

There were periods were correlations to these two asset classes were above 0.6, e.g. in 2014, where risk managers working at capital allocators likely were getting nervous. However, investing in a global macro fund does require having faith in the fund manager implementing his perspective, even if his portfolio is largely comprised of SPY or AGG. 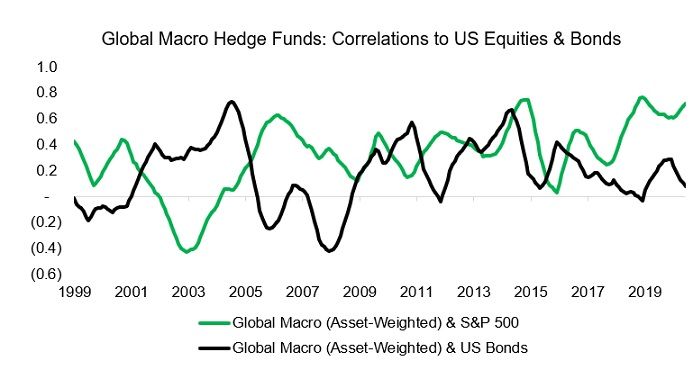 GLOBAL MACRO FOR A US EQUITY-BOND PORTFOLIO

Next, we simulate the impact of adding a 20% allocation to global macro funds on a traditional equity-bond (60-40) portfolio in the US. We could start this analysis in 1993 and include the stellar performance of the funds in the 1990s, but it is unlikely for the average global macro fund to consistently generate double-digit returns again. We, therefore, take the period between 2005 and 2020 as a lookback period, which includes two major stock market crashes as well as multi-year bull markets in equities and fixed income.

We observe that the return of an equity-bond portfolio would have decreased a little with the inclusion of macro funds, but volatility went down even more, therefore boosting risk-adjusted returns. Furthermore, the maximum drawdown reached during the global financial crisis in 2008 was reduced significantly. 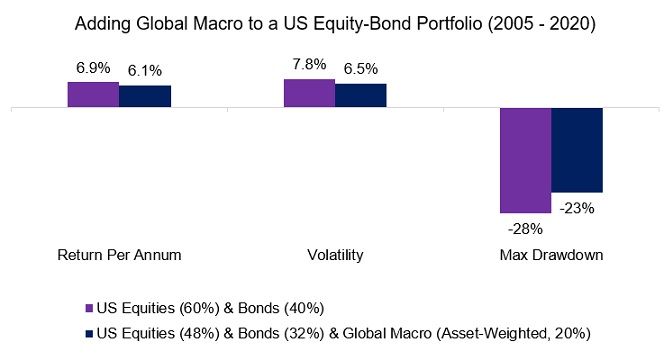 Although the analysis highlights attractive diversification benefits from allocating to global macro hedge funds, investors need to be cautious of the index data used given reporting biases. Funds tend to start reporting returns to databases when performance is good and stop when performance turns negative, which tends to overstate the returns and understate the risks of such indices.

We can partially correct for the reporting bias of hedge fund indices by simply reducing the annual returns, where academic research indicates that performance is overstated between 2.5% and 7.5% per annum.

Rerunning the analysis with these assumptions highlights that global macro hedge funds remain attractive from a risk perspective, but it largely depends on how much historical index returns are overstated.

It is not surprising that capital allocators have not meaningfully increased their allocations to global macro hedge funds in recent years given the shrinking alpha. However, what is somewhat surprising, is that the market share of global macro funds in the hedge fund universe has been decreasing consistently between 2011 and 2020. Perhaps they have not performed strongly, but at least they are still providing uncorrelated returns and diversification benefits, in contrast to other strategies like long-short equity that offer neither. 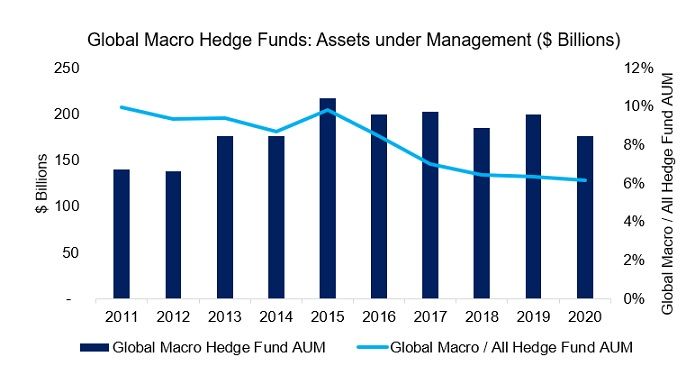 Is there still a place for global macro investors in today’s capital markets?

The old masters of the universe often had informational advantages as access to policymakers and central bankers was less regulated and market data was not disseminated equally to all investors. However, that competitive advantage is long gone.

However, just because some strategies have become more accessible does not mean it is easy utilizing these in an asset allocation framework. Understanding and combining these relatively complex strategies requires deep domain knowledge. Global macro investors should be able to create value via portfolio construction and risk management, especially if offered at low fees. Given that bonds have largely lost their purpose in asset allocation, the case for uncorrelated strategies has never been stronger.

The Variance Premium: What Premium?

AI, What Have You Done for Me Lately?