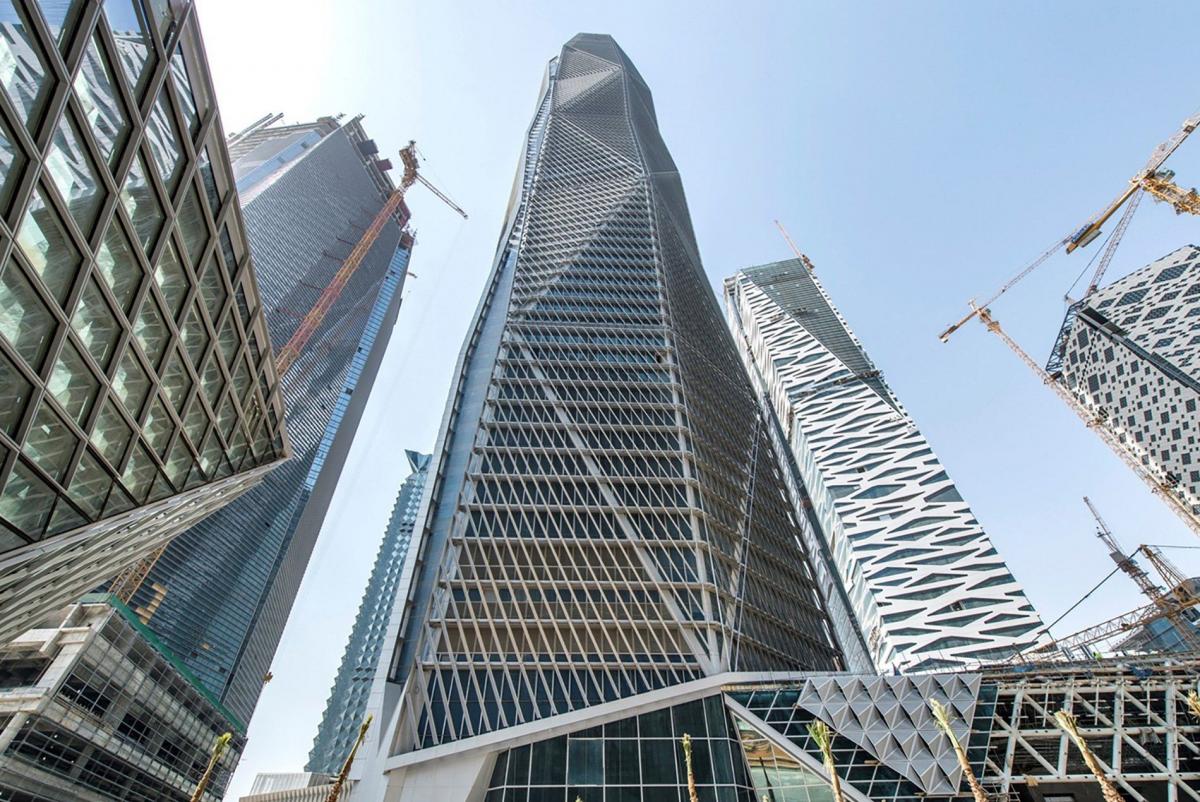 Sovereign wealth funds have looked to alternatives for outperformance. Analysis of their investment shows a preference for higher-risk, higher-return strategies.

Sovereign wealth funds (SWFs) are among the biggest investors in the world. As a group, they boast assets under management (AUM) of $7.84tn as at the end of 2020, equal to around 7% of global AUM of $111.2tn. Their AUM has grown at a rate of 7.9% per annum since the end of 2011, up nearly twice as much (+98%) over the past decade. Some SWFs invest domestically, often with the aim of delivering large-scale infrastructure projects, domestic regeneration, or to encourage development of particular sectors, while others look to diversify outside of their home country seeking financial returns and sometimes access to expertise and emerging technologies.

Not surprisingly, given their long-term investment remits, sovereigns are significant investors in alternatives (Fig. 1). Cumulative allocations to private equity, real estate, and infrastructure have risen 251% over the past decade, from $205bn in 2011 to $719bn at the end of 2020. 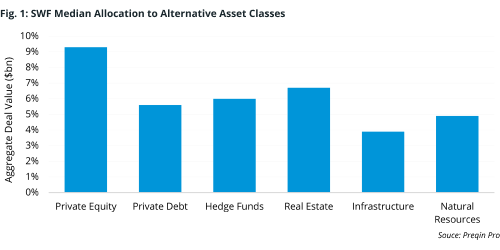 Despite the huge scale of their investments and ambitions in alternatives, SWFs’ commitments to private capital asset classes remain substantially below their ambitious targets. In private equity, current median allocations of 9.3% are 4.1 percentage points (pp) below the median target allocation on 13.4% (Fig. 2). The shortfall is 3.3pp for real estate and 3.1pp for infrastructure. Hedge funds are the big exception to the trend, with median target allocations decreasing in recent years, down from a high of 8.0% in 2016 to 6.1% in 2020, which is just 0.1pp over the 6.0% median allocation. Allocation targets and commitment levels across all alternative asset classes can be seen in Preqin’s new report, Sovereign Wealth Funds in Motion. 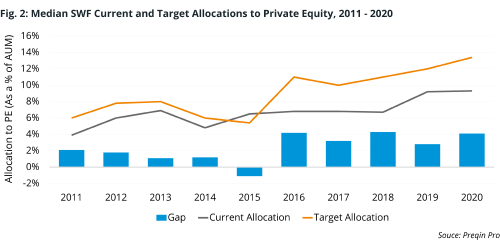 Within the asset classes, we see SWFs having a higher-than-average tolerance for risk and a preference for higher-returning strategies. In private equity, the focus of SWF investments has been buyouts (45% of allocations) and growth capital (19%), with only a small proportion (3%) of investments via the diversified fund of funds route, compared with the 12% that all private equity investors allocate to fund of funds.

SWF investments in venture capital account for 26% of their private equity & venture capital (PEVC) exposure, spread evenly between early and later stages. Although, many SWFs are now seeking new ways of gaining access—both for new technologies and returns—to the companies and industries they see driving long-term prosperity.

In real estate funds, SWFs prefer value added and opportunistic strategies, on top of their portfolios of direct investments. In infrastructure, value added strategies are also favoured (6pp over the proportion of total AUM in the strategy), but here SWFs are also overweight in core-plus (3pp over strategy AUM).

So, how has this preference for higher returns translated into performance? Unsurprisingly, the picture is mixed. SWFs’ return from private equity investments maintained a consistent premium above the wider asset class up to 2016, averaging 0.8 percentage points IRR from 2011 to 2017 when measured by vintage year (Fig. 3).

Real estate, however, shows SWF returns were considerably below wider asset class returns in 2011 (-3.2 pp IRR) and 2012 (-4.1 pp IRR). More recently, the performance of SWF investments in real estate has improved, with average outperformance above the wider asset class of 0.5 pp IRR from 2013 to 2017. This may reflect SWFs’ early preferences for trophy real estate assets that felt the corrections of the Global Financial Crisis (GFC) more harshly than more diversified real estate portfolios. Private debt results show a recent uptick in SWF investment returns, which were well above the asset class average in 2017. 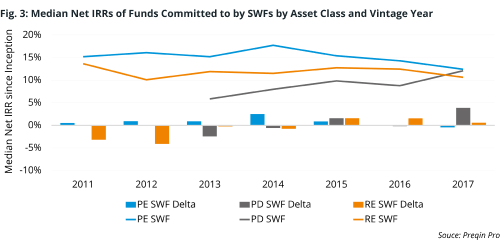 We expect a tilt in SWF strategies over the coming years. Whilst double bottom lines—targeting financial and strategic or social returns—have been common at sovereign funds for many years, SWFs will play an important role in the recovery from COVID-19 and in helping economies with the decarbonization agenda.

Saudi Arabia’s Public Investment Fund (PIF), which has $360bn in AUM, has turned its focus to the Saudi economy, increasing investment in domestic projects from $16bn in 2019 to $40bn annually from 2020 through to 2025. PIF, which was founded with surpluses generated by the Kingdom’s oil exports, aims to contribute $320bn to non-oil GDP over the next five years, to grow AUM to over $1.07tn and create 1.8 million direct and indirect jobs by the end of 2025.

Reconstruction and recovery efforts may lead to a change in the focus of SWF investments in alternatives. Historically, SWFs have focused on large funds, driven by their need to deploy sizable amounts of capital. But investments in sub-$500mn private capital funds, which in 2020 accounted for 22% of the number of fund commitments recorded by Preqin, are likely to increase given the role SMEs will be expected to play in driving an economic recovery.

The destination of SWF fund commitments reveals where there is room for strategic shifts. Funds in the mature economies of North America and Europe make the vast majority of their investments in their respective regions (72% and 73%). This is not true of less established markets: Asia-based SWFs make half of their investments within the region, and in the Middle East just 8% of SWF commitments are to funds based in the region.

SWFs play an important role in the global financial system. They can take outsized or countercyclical positions across individual assets or asset classes. Outside private markets, they have stepped in to offer support with capital raising at difficult times, particularly with banks, financial institutions, and consumer-facing companies during the GFC, and in strategic industries during the COVID-19 pandemic. In private markets, they have taken large, long-term positions in funds and formed deep relationships with fund managers. Over the next decade, SWFs will likely become more visible, using their undoubted clout to drive economic growth and deliver prosperity to the populations they serve.