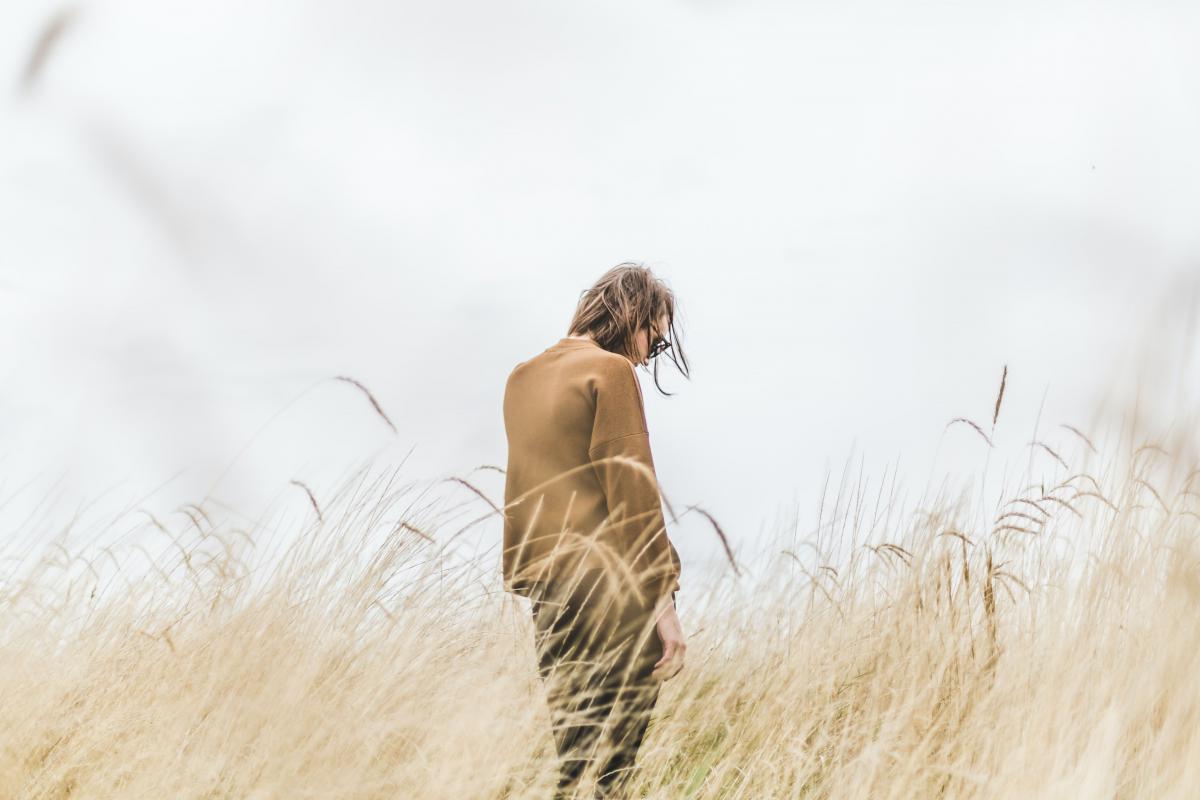 The idea that “losses loom larger than gains” is a cornerstone of behavioral economics. That famous phrase refers to people’s tendency to focus more on downsides than upsides, whenever they think about outcomes that are similar in magnitude. That tendency (which is also known as “gain-loss asymmetry”) is a robust empirical fact: ever since it was first formally studied in the Nobel-prizewinning work of Daniel Kahneman and Amos Tversky in the 1970s, it’s been replicated in thousands of well-designed experiments, both in behavioral science labs and in the real world (including the real-life decision-making of investment professionals). However, there is one aspect of gain-loss asymmetry that is less well understood: the role of regret in decision-making.

Risk aversion—the preference for certainty over randomness—is the leading explanation for gain-loss asymmetry. Yet recent research is uncovering something deeper behind this story. In planning for the future, people don’t just calculate the probabilities of different outcomes; they also consider how they might feel about those outcomes. To put it differently:

Hence, decision-makers’ choices are often significantly influenced by not only what they think might happen, but also how they’ll feel about it after the fact—even when their ex-post emotions should be irrelevant.[1]

It may seem obvious that forecasted emotions play a significant role in many (if not most) human decisions. Consider how natural the following thoughts seem:

Nevertheless, the impact of future emotions on decisions isn’t accounted for by most investment models—both in how portfolios are constructed and in how investment organizations are designed.[2] That absence is problematic: rather than being the result of optimization, many investment decisions may actually result from regret minimization, e.g.:

The costs of regret-driven (or regret-influenced) decision-making is not well studied in investing, which may be holding back progress in improving governance and incentive structures.

In this article, we share some findings from our work at Stanford’s Global Projects Center (GPC) on the impact of regret on decision-making in investment institutions. We focus on investors’ perceptions of regret in selecting private equity funds, as such decisions are often (heavily) influenced by subjective factors that are hard to measure concretely, and so may be more vulnerable to regret biases. This work is part of a larger project at the GPC on Portfolio Navigation, which attempts to develop technology-boosted decision systems for long-term investing.

Before dissecting our findings, let us review some basic principles in the psychology of regret, and how these tie into investment decision-making.

The Structure of Regret

Regret is an exclusively downside phenomenon: rarely does anyone regret things turning out well.[3] Regret comes in two flavors, justified and unjustified. Sometimes things turn out badly, even when decisions are made ‘correctly’, using best practices, best available information, and appropriate analysis (given constraints of time, computational cost, etc.). Feeling regret in such situations is unjustified but still commonplace. Governance and incentive systems would do well to account for cases where decision-makers might feel unjustified regret (for example, by rewarding them for taking well-examined risks, regardless of outcome). But unjustified regret isn’t our focus here. We instead concentrate on justified regret, which results from decisional errors. (For the rest of this article, we’ll refer to justified regret as simply regret).

Two main types of errors underpin regret: errors of commission and errors of omission (things that are/were done, and things that aren’t/weren’t done, respectively). These errors can be further subdivided into action errors and information errors. The following table describes these error classes.

Of the two types, regret from information errors are especially important in investing, for two reasons in particular:

Information errors can lead to stronger regret when the spectrum of available actions is narrow and those actions can’t be reversed later on—for example, when deciding whether or not to invest in a private equity fund. These are investments in which the commitment period is well-defined (18 months) and the duration of the investment is long (14 years) with significant costs to sell or transfer the investment to another investor. Our empirical discussion in the next section focuses on that application.

There are many other aspects of regret that have been uncovered by recent empirical work in cognitive psychology and behavioral economics. For brevity, we skip them here, apart from pointing to the finding that regret is most often socially fueled and tends to be stronger when it is. That is, fear of regret tends to be felt most strongly (and most significantly sways decisions) when decisions are observed and judged by others, and therefore have consequences in terms of reputation, authority, or ridicule. Many key decisions in investment organizations are subject to critique by others, and thus open to being influenced by expected regret. Quite a few governance structures we’ve studied among institutional investment organizations take weak (or no) account of these regret influences in their formal decision processes and incentive structures. We say more on the need to improve this status quo later.

Results on Regret in Private Equity

Below, we distill findings from a survey of major institutional investment organizations on the sources of regret in private equity. We present only a selection of results. Further analysis will appear in an upcoming (publicly available) research paper.

The results are based on the views of 24 decision-makers who are employed by major institutional investment organizations. The typical organization represented in our response set is a North American public pension or endowment with between 10 and 100 billion $USD in assets under management.

In one set of questions, respondents were asked to:

The following table displays the expressed importance of these factors, based on mean ranking of each factor by the respondents. 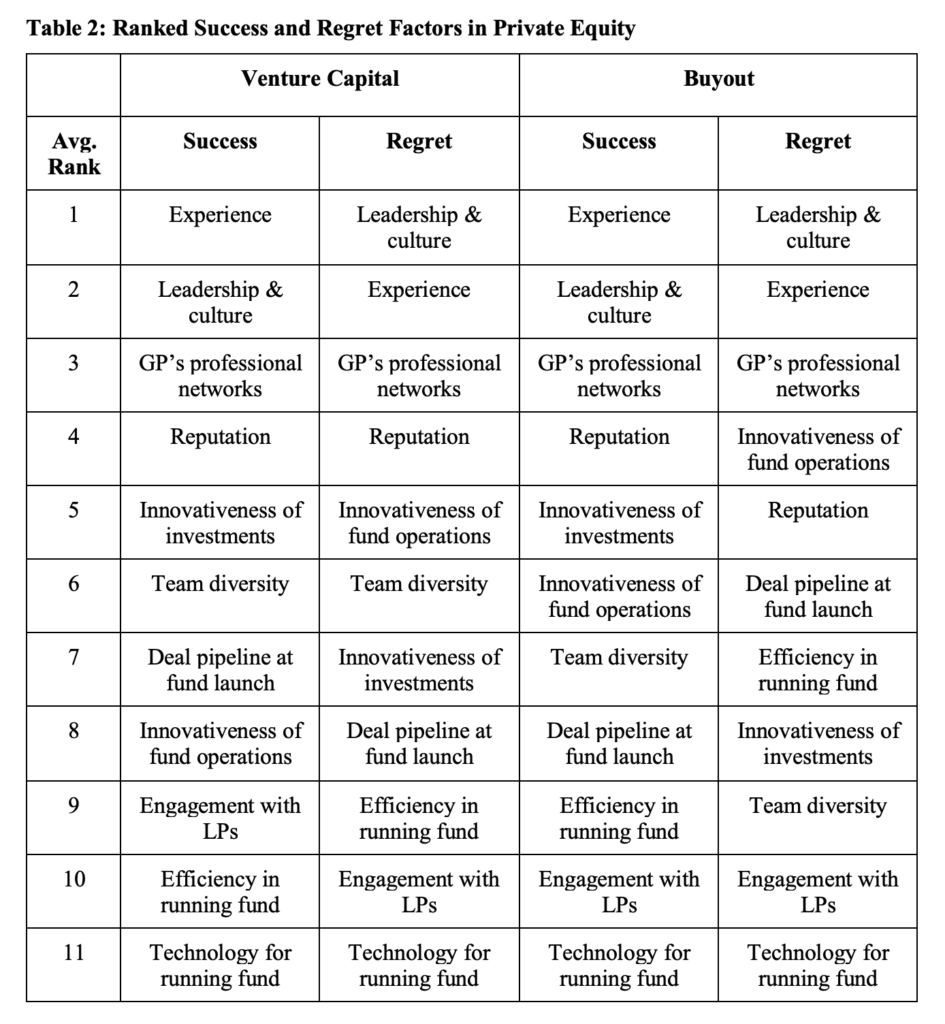 Several findings deserve special attention from these rankings, which are at the sample level (i.e., averaged over all respondents).

Apart from exploring differences in factors of success and regret, our survey also explored regret in the context of convention—i.e., to probe whether respondents agree with John Maynard Keynes’ observation that (for purposes of regret) “It’s better to fail conventionally than succeed unconventionally” in financial markets. We asked whether respondents would feel more regret from investing in:

We asked the same question of respondents for BO funds The results are summarized below.

We find it somewhat surprising that almost 63% of respondents would feel more regret over investing in a conventional VC fund that underperformed, while less than half that amount would feel more regret over investing in an underperforming and unconventional fund.[5] The same directional (albeit weaker) result for BO funds is also surprising. These observations call for additional study in larger samples. But they do beg a question: might the demand for unconventionally run funds be larger than it is purported to be? And might the ‘learning curve’ for those funds be more forgiving than might be expected (at least in terms of LPs’ perceptions)? Studying these questions presents an interesting future avenue for research.

Leading research on the psychology of regret (and even a light reading of Shakespeare) presents a hard truth: regret is human and oftentimes unavoidable. But it is also manageable in investment organizations—with appropriate adjustments to culture, incentives, and exploratory technology.

One of the most important problems for managing regret in organizations is separating unjustified regret from justified regret. When negative outcomes occur, the decision-makers responsible for them may feel regret from a number of sources: they may be blamed, shamed, and have their resources reduced in the future as a consequence of those outcomes. To the extent that their decisions were made on bad information or through bad analysis, the ensuing regret they feel may be justified, and be a strong incentive to learn from mistakes. But when the decisions behind those bad outcomes were sound, unjustified regret may lead to future harm—for example, from decision-makers being less willing to undertake suitable risks and innovate in the future (the adage “once bitten, twice shy” is certainly applicable in the world of finance).

It’s therefore advisable that evolved governance systems try to clarify what elements of negative outcomes were knowable beforehand (and therefore avoidable - justifying regret) and what elements weren’t. And this knowability is essentially a data problem, with a data solution: Many investment decisions (especially in more opaque domains, such as private equity) are made based largely on subjective factors and with incomplete information. This muddies the waters on the justifiability of regret (what is knowable is less clear with unclear information).

Fortunately, new types and sources of data are emerging—especially alternative data— that can expand the boundaries of what is knowable before making investment decisions. This is crucial for improving how an organization’s governance and decision processes handle regret, in part because of the non-equivalence of what drives success and what causes regret. Consider the factor of ‘leadership and culture’ from the earlier survey. The presence of certain qualities in culture can help a fund succeed, but the absence of those qualities doesn’t automatically make the culture ‘toxic’: there may be a need to measure success factors and regret factors separately. The availability of new sources and types of unconventional data—e.g., from social-media feeds, LinkedIn profiles/connections, online job postings, and other web-scraped data—is now making it possible to distinctly measure these two types of factors—and therefore opens new ways to manage them distinctly.

We see the ability to map potential sources of regret, and mechanisms for managing them, as vital components of systems that assist organizations in decision-making. Such systems are part of what we call Portfolio Navigation, and our present conceptions of them are as being fueled by data and advanced analytics. One might think of them as equivalent to ‘driver assist’ features already available in some cars: not capabilities that removes the human components of investment decision-making, but technologies that are designed around a more sophisticated understanding of human behavior, and so more adept at improving it. We strongly believe that this human-centered design will become the hallmark of best-available investment technologies in the future. Those will be the kinds of technology that institutional investors won’t regret using.

[1] There is substantial academic debate in both psychology and behavioral economics about whether these emotions distort the probabilities that people assign to possible outcomes, the objective (i.e., non-emotive) payoffs of those outcomes, or both.

[2] Perhaps rising awareness about the value of emotional intelligence will alter this status quo in the future.

[4]  This observation taps into an interesting question: do decision-makers tend to feel more regret over choices that are based upon objective factors (i.e., something clearly measurable) or subjective ones (i.e., something that relies more on intuition, holistic judgment, etc.)? In this instance, “experience” may be more objectively measurable (e.g., years spent in the financial services industry), whereas leadership and culture may be challenging to quantify with simple metrics. We are pursuing this question in follow-on research.

[5] One possible explanation for this result is that some respondents might feel more pressure to ‘get it right’ when it comes to conventional decisions (i.e., choices they’ve faced before, or things with which they’re more familiar) than decisions related to innovation. This possibility sets up a potentially powerful tension between 1) the comfort of familiarity and 2) a higher regret potential from familiar decisions. We are studying this possible explanation in subsequent work.