A Probabilistic View of Established vs. Emerging Managers in Private Markets

A well-informed decision starts with an understanding of base rates. What is the probability of an outcome based on historical data? And then using base rates to suitably calibrate conviction. Limited Partners investing in private markets tend to favor established managers and avoid emerging managers. As the asset class has evolved, that approach includes a fairly large bet against historic base rates.

“WE ONLY INVEST IN TOP QUARTILE MANAGERS”

We all apply some variation of this theme in our manager selection. I’ve talked to hundreds of LPs over the years and I’ve never heard “we look for average.” Many manager selection processes are built around finding high performing firms based largely on historical results and recommit to the winners. This process obviously favors established managers with existing track records. Early studies supported this thesis. A 2005 paper from Kaplan and Schoar noted, “we document substantial persistence in fund performance…General Partners (GPs) whose funds outperform the industry in one fund are likely to outperform the industry in the next; GPs who underperform are likely to repeat this performance as well.”[i]

But what if the cornerstone assumption of persistence in this asset class is wrong? Without persistence, selecting a top performing manager ex-ante requires a different mindset, different diligence and introduces much more uncertainty into the equation. It should also create higher degree of willingness to consider emerging managers. 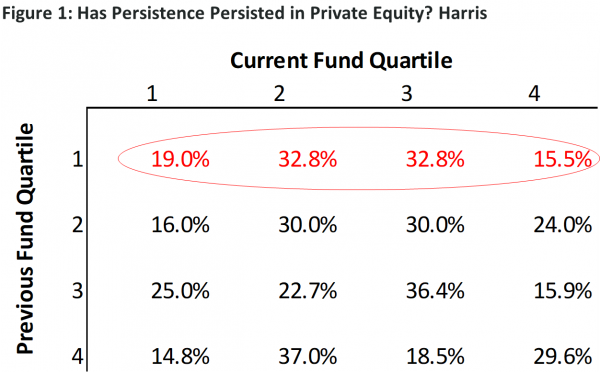 As the industry has matured, Kaplan, Schoar and others have revisited their research with more recent data which shows performance is in fact less persistent today.

McKinsey recently released a report that found a similar trend although not as quite as damaging to the argument as the Harris data, stating that “follow-on performance is converging towards the 25 percent mark - that is, random distribution - but hasn’t reached that point yet.”[ii]

Antoinette Schoar, one of the original authors of the 2005 paper that documented persistence, commented in 2017 that the probability of a top quartile fund repeating as a top quartile fund was only 12%[iii]. “This persistence we saw in the 1990s has gone down over time… The question now is, why is this happening and what implications does this have for investors in private equity?”[iv]

WHY HAS PERSISTENCE DECLINED?

As absolute skill increases the difference between the best and the worst becomes narrower, increasing the relative impact of luck on outcomes. This was coined the Paradox of Skill and has been written about extensively by Mike Mauboussin, Stephen J. Gould, Peter Bernstein and others across fields as unrelated as baseball and mutual funds. 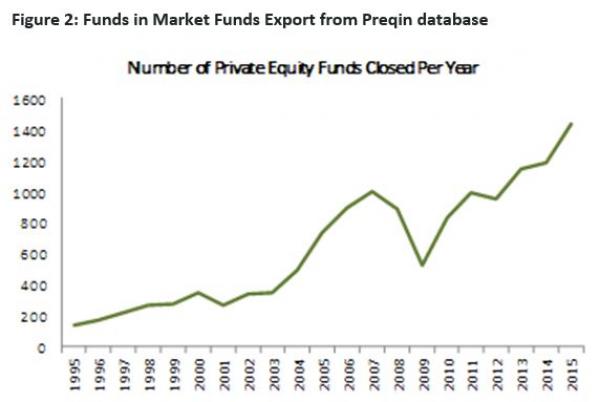 Starting in the 1980s the mutual fund industry experienced an explosion in fund formation, but as more funds were formed the standard deviation of excess return declined dramatically. A study in 2014 titled “Scale and Skill in Active Management” concluded that [mutual] fund managers had become more skillful over time and that ‘new funds entering the industry are more skilled, on average, than the existing funds.’ Like the mutual fund industry, the private equity industry has experienced a surge in the number of funds and there is no evidence that growth is slowing. A recent Preqin report shows 3,754 funds in market, up from 1,385 just 5 years ago[i]… a 19% compound growth rate. 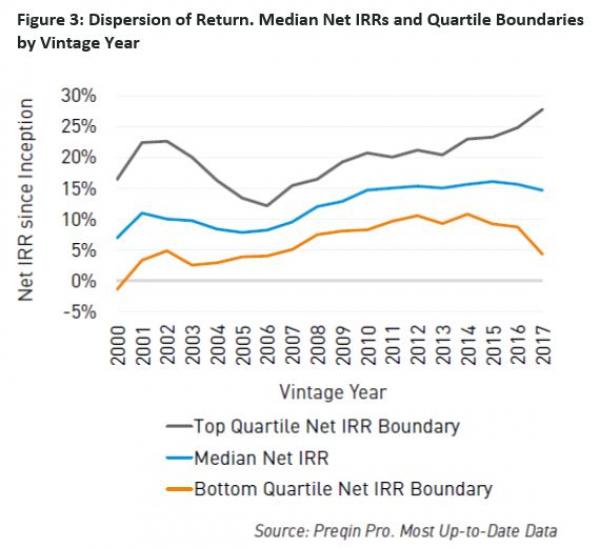 The dispersion between the top quartile and the bottom quartile in private equity continues to be robust, increasing every year since 2012 according to Preqin. But the level of persistence has declined dramatically with a seemingly random outcome in follow on funds for previously top quartile managers.

Judging the skill of new entrants in private equity is highly subjective, but the lack of persistence suggests the variance in skill between managers has narrowed. There are strong economic incentives for talented investment managers trained at leading private equity firms to start their own firm, which spreads that expertise and training more broadly. Increasing specialization across sectors, geographies or sub-strategies or the addition of operating professionals suggests a higher level of domain expertise across the industry. And Limited Partners have played a role by utilizing improved market data to discover and continuously reallocate capital to the fittest firms. But as absolute skill increases across firms, the variance in skill declines, leaving luck a more important determinant in outcomes.

To minimize the role of luck, Limited Partners can improve their own skill relative to peers in the manager selection process or compete in different ways. Mauboussin called this “finding the weaker game”. In his words, “being a consistent winner among the best gamblers or in the most intensely competitive markets can be very difficult. Instead, your energy might be better spent looking for less-efficient niches.” Private Equity is not a ubiquitous asset class and with so many diverse strategies, it offers a degree of freedom for investors that other asset classes may not.

As for improving relative skill, if you’ve done this long enough, you know the feedback loop is long and outsmarting other smart people is hard. Improving relative skill in that environment is challenging. What about “finding weaker games”? Weaker games can imply betting against less sophisticated counterparties. This was an important source of alpha in the public markets for years as professional investors often profited by trading with less sophisticated individual investors. It can also imply looking for structural inefficiencies where price and probabilistic outcomes are more favorable. Using a gambling analogy, think about card counting. A card counter is simply judging when the deck is “hot” and increasing their exposure to decks with better odds of payout. (If you haven’t read Fortune’s Formula by William Poundstone, I highly recommend it) Emerging managers within the private equity market offer a similar mispricing opportunity:

Sticking with the gambling analogy, Roulette is a great analogy for thinking about the impact of skill because there is none. The odds of winning or losing are known and unchangeable. It provides an extreme example of investing in an environment where luck is the only variable in the outcome.

For those who don’t play roulette, here is an overview and 3 simple bets for illustration. There are 38 numbers on a roulette wheel; 18 red, 18 black and 2 green (numbered 0 and 00).

Each game of roulette is independent of the last. It’s not a deck of cards like blackjack or poker where the odds change during the game and there is some skill in recalculating the odds or playing the other players. The house takes 5% of every $1 bet and there is nothing a player can do about it other than just try to have fun or look for a different game.

Tactical decisions are a little like finding games with better probabilistic outcomes. Either the frequency of winning is higher, or the magnitude of payout when you win is higher for the same price. Common tactical decisions include developed vs. emerging markets, larger cap vs. smaller cap strategies, buyout vs. venture and others. Investors form a view that one sub-strategy offers a higher probability of success and tilt their allocation in that direction. The life cycle of a firm offers a unique and often overlooked tactical decision. Imagine Bet #1 in Roulette above under 2 scenarios. In one scenario, the probability of winning is >50% instead of 47% with the same 1:1 payout. In the second scenario, the payout is 2:1 instead of 1:1 with the same 47% probability. Holding all other rules constant, you now have a mispricing, and it pays to sit at the Roulette table until the conditions change.

I explored data from Preqin, Pitchbook, Cambridge Associates and Cepres and found that first-time funds are characterized by a similar mispricing as my hypothetical Roulette scenarios. The probability of winning is higher, and the payouts are better. For instance, data from Preqin[i] shows that the median return of first-time funds from 2002-2017 was higher than established funds 93% of the time. (15 out of 16 years).

Even if you had the perfect foresight to pick the one vintage when established firms outperformed you only outperformed by an average of 60bps. Sticking with the skill-free environment like Roulette, let’s eliminate manager selection from the equation; you simply have 1 decision; first-time funds or established funds? Which one looks like the better bet?

Like gambling, successful investing requires an ability to identify superior risk/reward propositions; situations where the odds are in your favor either due to the frequency of being right or the magnitude of the payout compensates you enough to overcome when you are wrong. And a really great opportunity would provide both frequency & magnitude. Those are the mispriced opportunities that lead to better outcomes.

Chris Keller is a Managing Director at Moelis Asset Management and co-portfolio manager of Archean Capital Partners.  Before joining Moelis and Archean Capital, Chris led the Private Markets team and chaired the Investment Committee at Summit Strategies Group, an institutional investment consulting firm. Chris is a Kauffman Fellow, a CFA® charter holder and received an MBA from Washington University in St. Louis and an undergraduate degree in Molecular Biology from The University of Colorado. LinkedIn 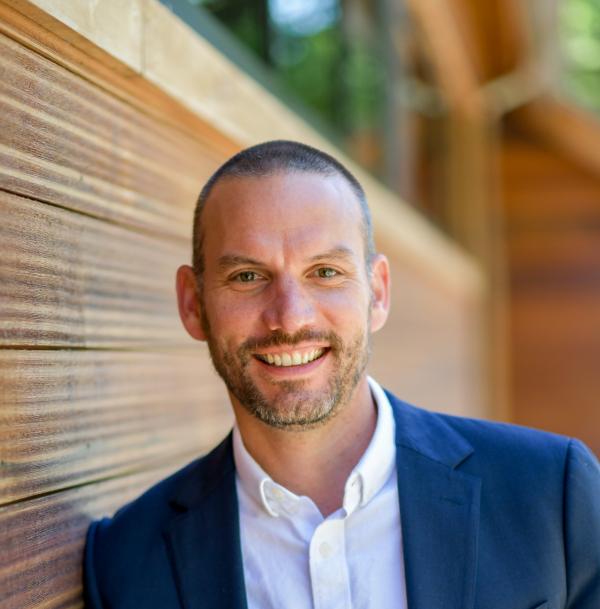