The Market for Jean‐Michel Basquiat: a Roller Coaster Ride Rather than a Quiet, Steady, and Sustainable Climb 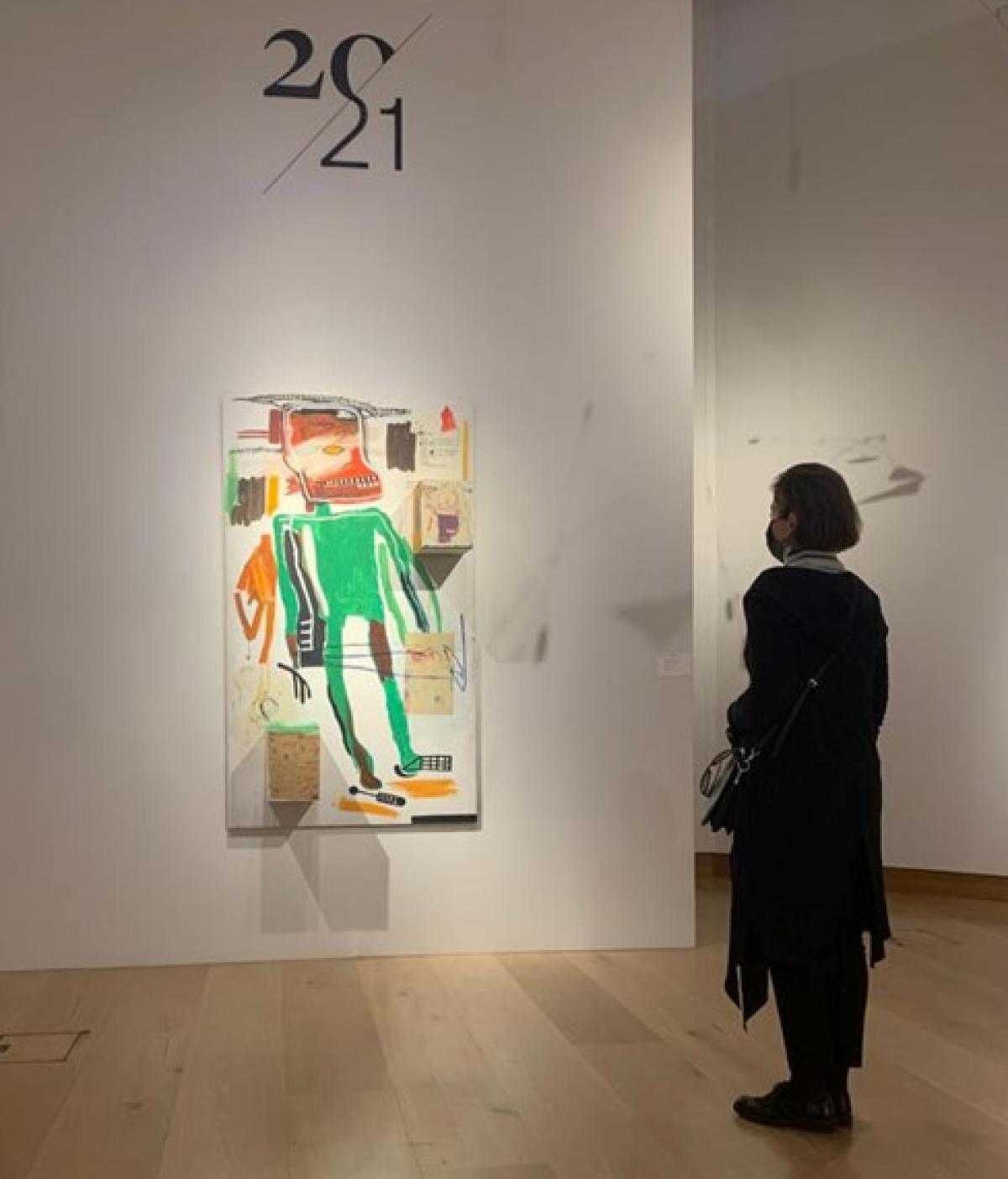 “Because it Hurts the Lungs” by Jean-Michel Basquiat, sold on October 15th, 2021, at Christie’s 20th/21st Century: Evening Sale Including Thinking Italian in London, UK for £8,2m ($9.6m) Photo taken by Margot Tchelikidi.

In the next few weeks, more than ten artworks by artist Jean-Michel Basquiat will go under the hammer in the high-profile New York November Marquee sales at Christie’s, Sotheby’s and Phillips. Altogether, the artworks are estimated to be worth between 75 and 130 million US dollars. Already this year, 15 artworks by the artist sold for almost $500m USD at the top three auction houses’ evening sales.

Jean-Michel Basquiat has undeniably become one of the best renowned and sought-after contemporary artists of our time and the prices of his artworks at public auctions have soared.

As inflation looms, finding ways to manage the inflationary pressures is becoming critical. Historically, art has often been seen as a solution to inflation. This is still the case, as shown by a recent UBS and Art Basel report, which found that inflation was one of the main motivations for buying art (along with return on investment and portfolio diversification).

The rationale, based on historical research, is that over time the price of art sold at public auction has mostly exceeded the rate of inflation and that art as an investment usually outperforms government bills and bonds (although it underperforms stocks).

So, should you go ahead and get in line to bid for one of these Basquiat artworks?

Before you start raising that paddle though, you need to make sure to have a complete picture of the market and growth cycle of an artist. Most importantly, you should look into liquidity trends and the price evolution for that particular artist. In the art market, as in other financial markets, timing is everything.

Let’s, therefore, review the liquidity and market value of Basquiat artworks over the past 15 years.

A volatile level of consignment, highly correlated with the ups and downs of the art market and the global economy:

In the absence of a derivative market, the art market consists exclusively of physical artworks being traded at public auctions or privately. Unfortunately, there is no record of private transactions, but public auctions sales provide an interesting historical view.

Over the past 14 years, collectors’ willingness to part with their Basquiat artworks has very much followed (maybe even driven) the ups and downs of the auction market. Given the value at stake, in times of crisis, collectors most likely have preferred to go private, or simply wait, rather than taking the risk of a low hammer price, or even a bought-in (unsold artwork). 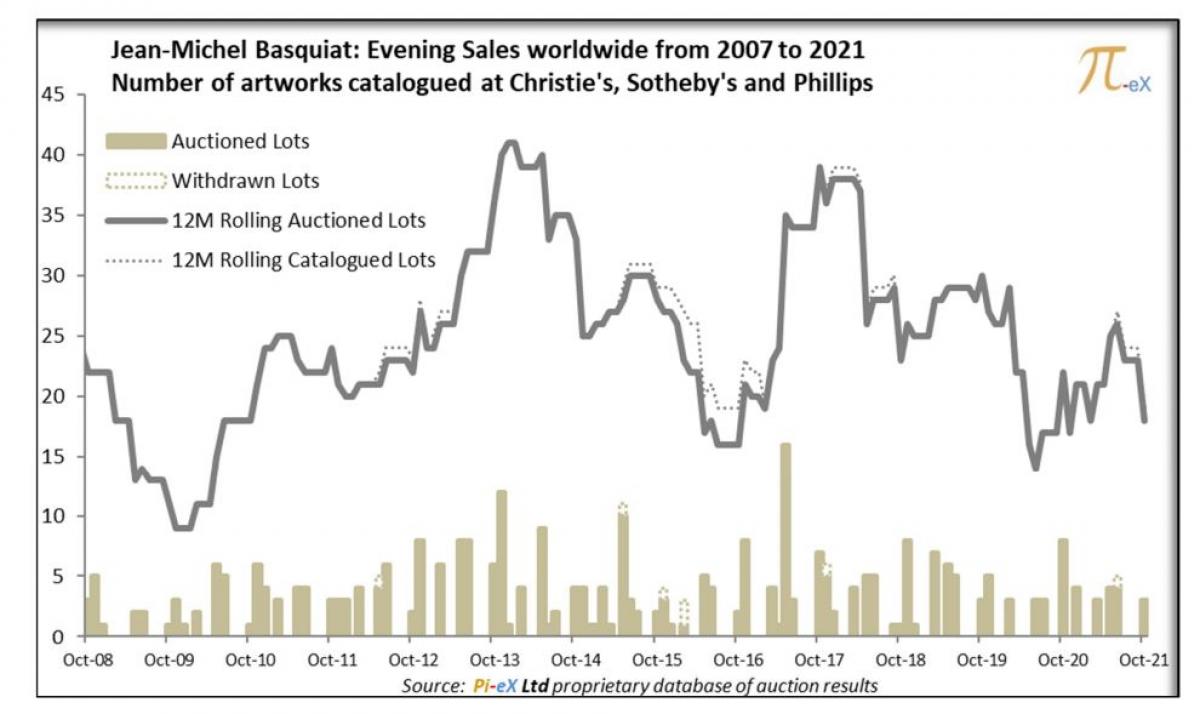 The graph above shows the 12-month rolling total number of artworks by Jean-Michel Basquiat catalogued, auctioned, and withdrawn at Evening auctions worldwide across the top 3 auction houses from 2007 on. Notably, the greatest dives in the level of consignment of Jean-Michel Basquiat's artworks occurred as the three major economic crises of the last decade hit the art market:

A roller coaster ride rather than a quiet, steady, and sustainable climb

Over the past 15 years, the total trading value of artworks by Jean-Michel Basquiat at Christie’s, Sotheby’s and Phillips’ Evening auctions has looked more like a roller coaster ride than the quiet, steady, and sustainable climb collectors often anticipate when they invest in art. 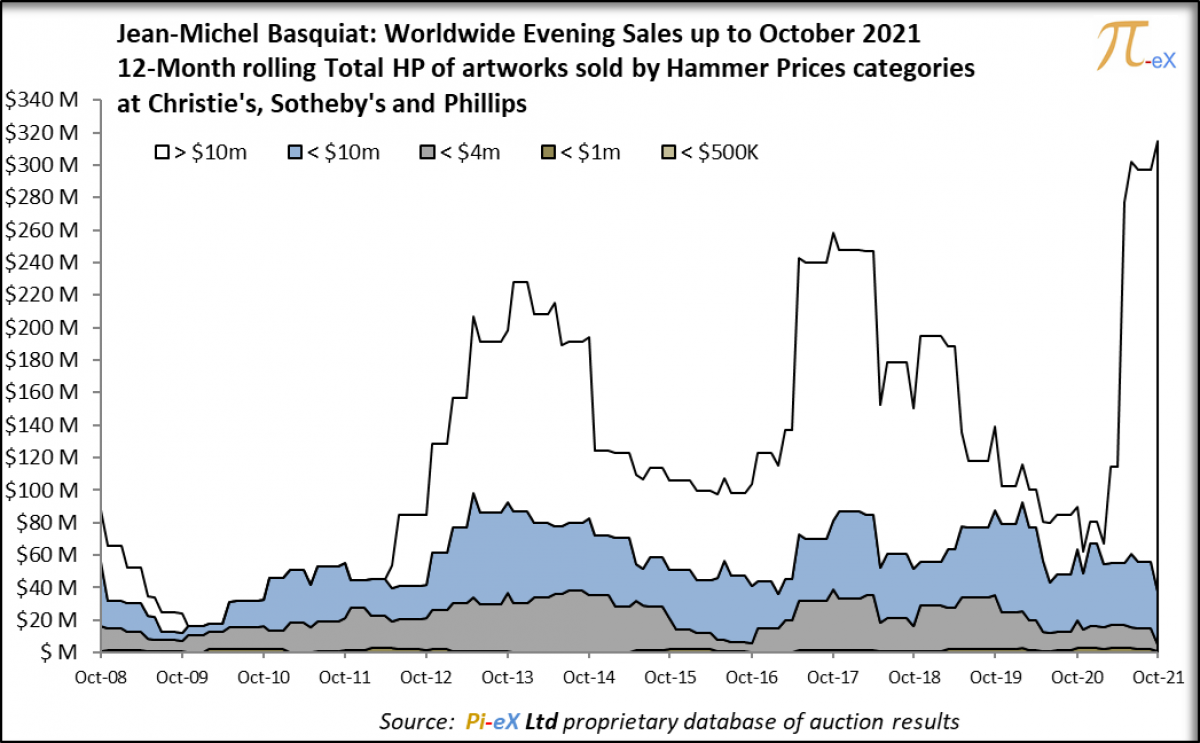 The ultra-high-end segment in white (i.e., lots sold for more than $10m each) shows the highest volatility over the past 15 years, featuring three peaks in the Basquiat market, in 2013 and 2018 and more recently in 2021.

Artworks by Jean-Michel Basquiat, sold for less than $10m each (in blue and grey), show a somewhat more stable history: while also affected by the 2009 crisis, the middle range priced artworks by Basquiat were less affected by the decreasing trend after 2018 but did not seem to have experienced so far the 2021 peak.

Such discrepancy between the very top end of Basquiat’s market and the rest of the artworks at Evening auctions is not explained by estimates alone: if there seems to be distinct dynamics applying to the two markets, it is also because different tools are used to position and market Basquiat’s artworks at different price points.

1. The role of Estimates on Request (EOR):

Estimates on Request (EOR) are used by the auction houses to signal a lot of high value. Over the past 15 years, 14 artworks by Jean-Michel Basquiat (less than 5% of the total number of artworks auctioned at Christie's, Sotheby's and Phillips) have been offered with an EOR.  While small in volume, EOR play an important role in the value fluctuation of the artist's market as shown in the graph below: 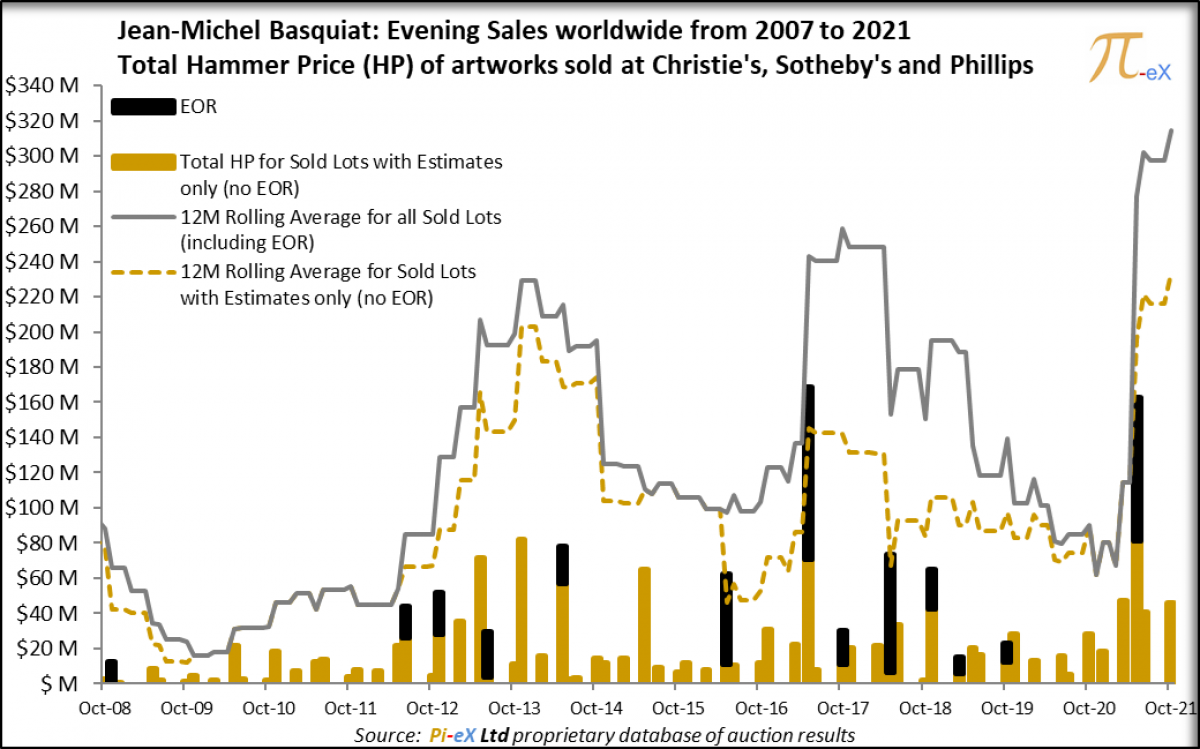 Notably, the average price of artworks by Basquiat, offered at public auctions with estimates (ie without EOR), had been stagnating since 2014. 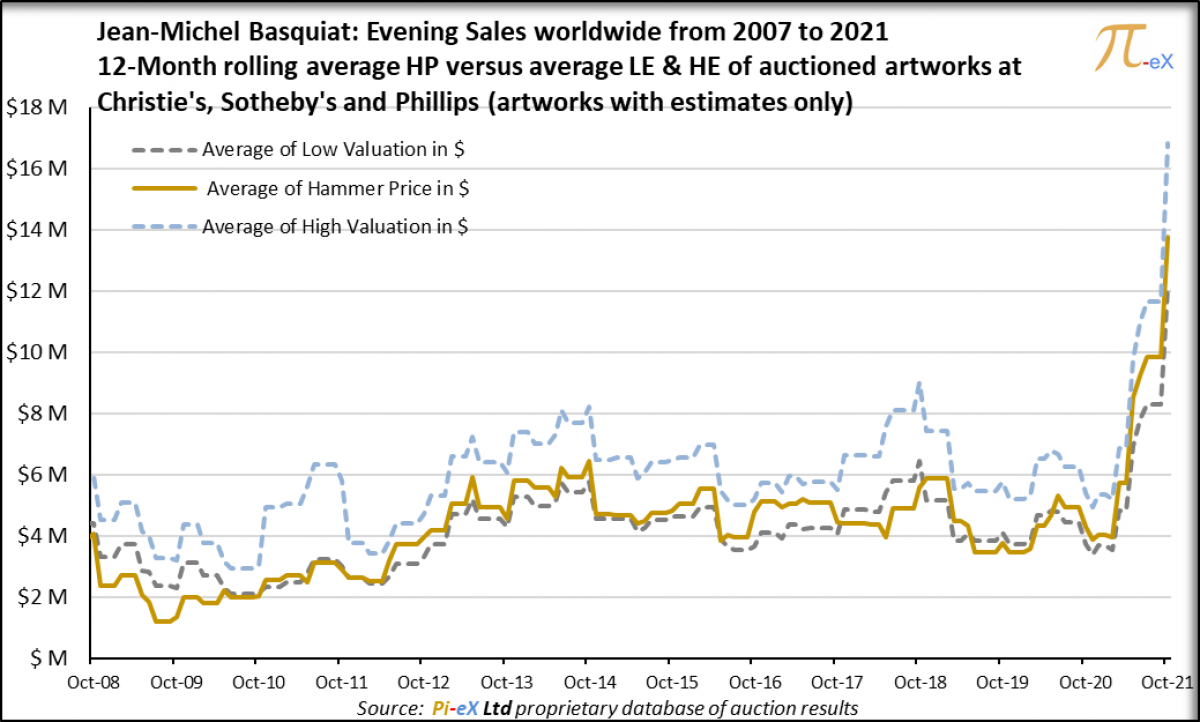 As shown in the graph above, the average price of Basquiat's artworks auctioned with estimates grew strongly and steadily from 2010 to 2014. In the following years, however, the growth stopped, and the average hammer price obtained at auction showed up and down volatility between the range of $4m and $6m.  Even worse, in 2018 and 2019, the average Hammer Price fell lower than the average low estimate for these artworks, indicating that – on average - potential buyers were not willing to pay the prices expected by sellers.

This all changed in March 2021 when Christie’s dedicated a whole single-lot Hong Kong auction to Basquiat's "Warrior" artwork featured during the auction houses' London March auctions.

Following the successful sale of “Warrior”, new sellers appeared on the market and more artworks by Basquiat were offered at auctions between May and October 2021, including 7 artworks with estimates of more than $10 million, bringing the average price of Basquiat artworks sold at auctions to a level never seen before (see graph above).

All 7 artworks sold successfully which was not surprising given the fact that 5 of them were covered by irrevocable bids. “Warrior” itself had an irrevocable bid.

Why is this noteworthy and how do irrevocable bids, also called third-party guarantees, affect pricing at public auctions?

2. The role of Irrevocable Bids:

While Estimates on Request signal lots of high value, Irrevocable Bids indicate that a buyer already committed to buying the artwork ahead of the sale at a pre-agreed price with the auction house, in exchange for a fee in case, the work sells for a higher price than the agreed pre-auction price. 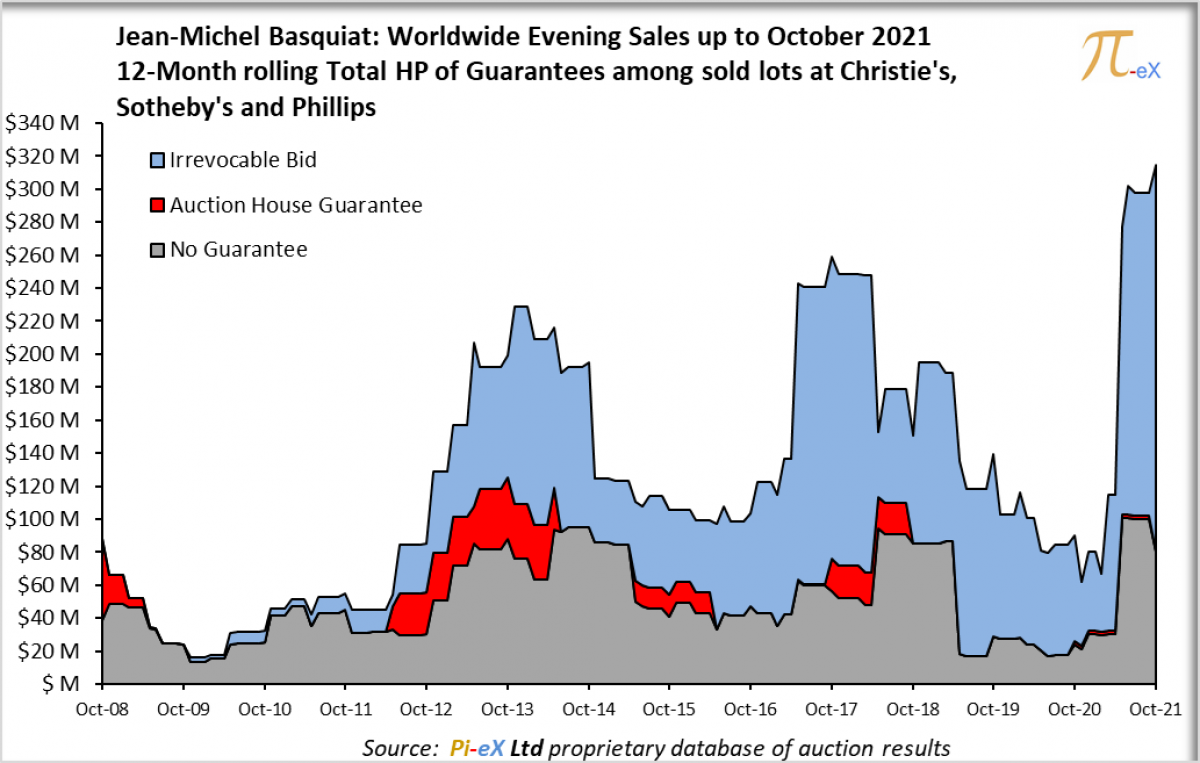 As shown in the graph above, Irrevocable Bids have played a major role in pushing value at the top of the Basquiat market. This role however has evolved over time in a direction that may not be all positive for Collectors of Basquiat artworks.

From 2012 to the Spring of 2019, the total 12-month rolling hammer price value of artworks sold with Irrevocable Bids (in blue) and artworks sold without any guarantee (in grey) moved in parallel without major discrepancy.

This all changed in the Spring of 2019 when the value of artworks without guarantee plummeted while the value of artworks with Irrevocable Bids remained high. This dramatic change indicates that the total Hammer Price for artworks with Irrevocable Bids, agreed ahead of the auction between 2 parties (the auction house and a third-party guarantor), remained high while the total hammer prices obtained at public auctions for lots without guarantee - via a transparent and fair process - collapsed.

Notably, as of October 2021, the value of sold Basquiat’s artworks at auctions seems to deviate again in opposite directions depending on whether the lots were covered by an irrevocable bid (in blue) or sold without a guarantee (in grey). This could potentially be an early indicator that the market for Basquiat has reached another peak.

What is next for the Basquiat market?

Building on the success of the Spring sales, the top three auction houses have prepared a strong offering of artworks by Jean-Michel Basquiat in their upcoming New York Marquee evening sales:

Below: "The Guilt of Gold Teeth", 1982 by Jean-Michel Basquiat 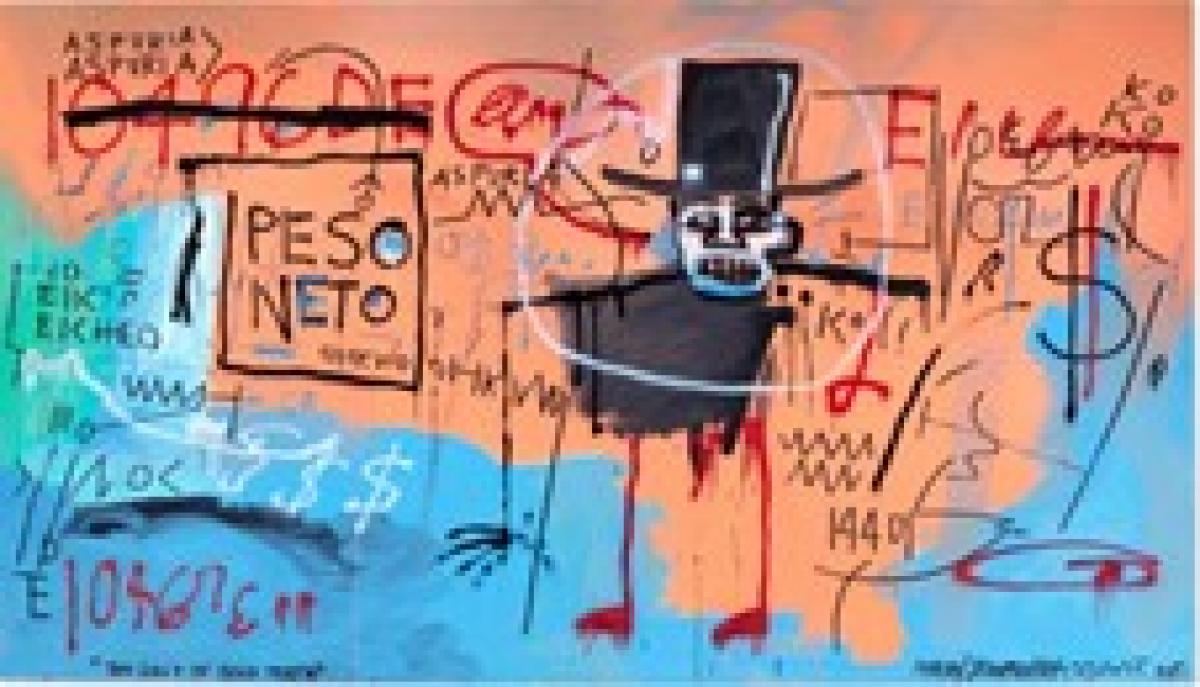 Property of an Important European Collector

Estimates: $40 to $80 million, covered by an Irrevocable Bid

Below: "Flash in Naples", 1983 by Jean-Michel Basquiat 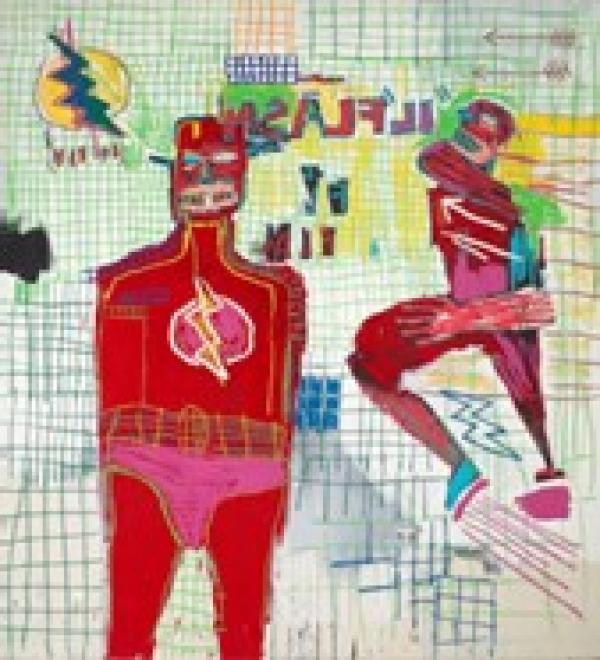 Estimates: $14 to $18 million, covered by an Auction House guarantee (which could potentially be itself covered by an Irrevocable Bid at the last minute)

At Sotheby’s two artworks also are offered in the Contemporary evening sales which is scheduled for November 18th, 2021: 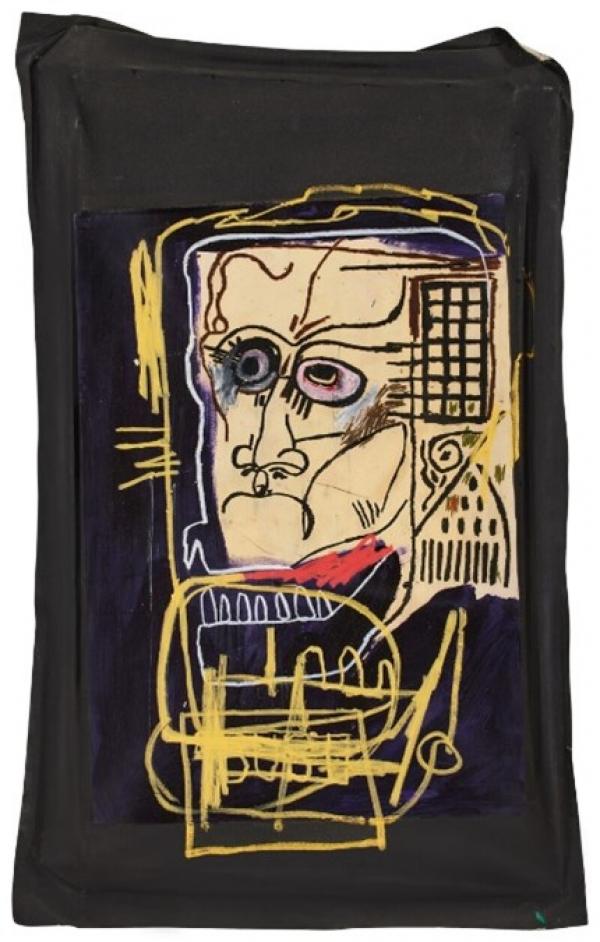 Caption
Made in Japan
Courtesy of Christie's 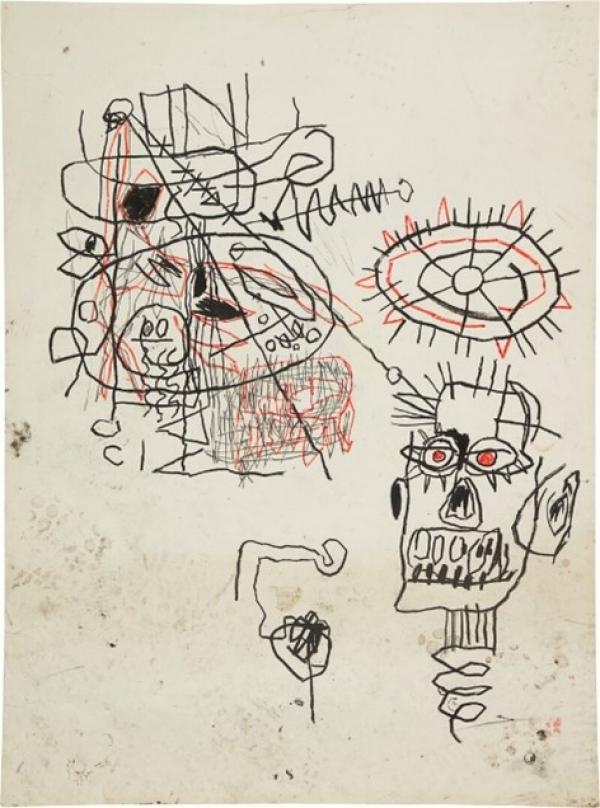 Finally at Phillips, two artworks are offered in the 20th Century & Contemporary Art Evening Sale which is scheduled for November 17th, 2021:

Below: "Untitled (from Famous Negro Athlete Series) ", 1981 by Jean-Michel Basquiat 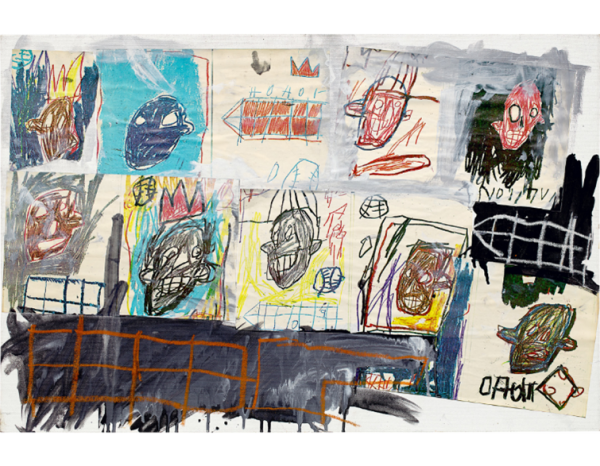 In the Spring of 2021, the comeback of seven-figure-estimate paintings to the auction rooms has certainly sent a very positive signal of confidence to art stakeholders and boosted prices under the hammer for Jean-Michel Basquiat’s artworks.

Historically however, trading of Basquiat’s art has been subject to fluctuations following the global economic trends. Also, recent public auction performances, highlighted the reliance of the artist’s market on the very high-end segment, and the use of pre-auction guarantees.

As many works by Basquiat are about to be offered at public auctions in the next two weeks, it will be interesting to track the performance of lots with and without guarantees.

In 1998, Christine founded PaintingsDIRECT.com. Based in New York, the company represented more than 500 contemporary artists and was one of the first galleries to offer art online. Christine also worked for Corporate Decisions Inc., a strategy consulting firm in Boston, US, Apple Computer in Kiev, Ukraine and P&G in Paris, France. 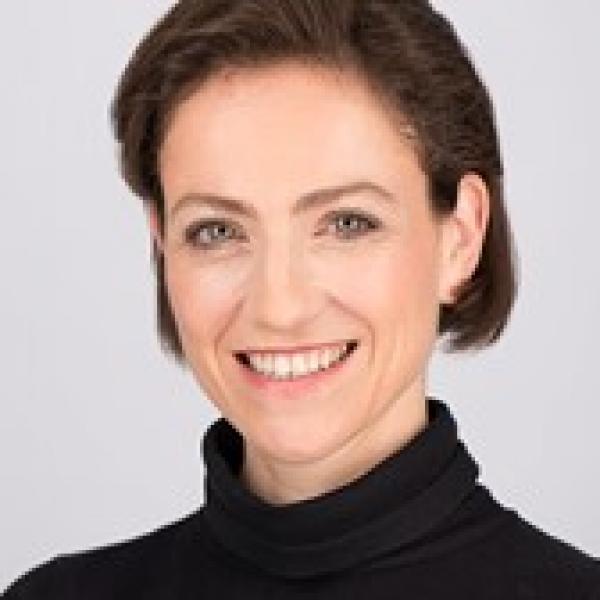 Christine has a dual MBA/MA degree from the Wharton School and The Lauder Institute, School of Arts and Sciences.  She attained her Bachelor of Arts degree with a specialization in Finance from ESCP, Paris.

Christine has been a member of PAIAM (Professional Advisors to the International Art Market) since 2017 and a Board member since 2019.  She is often quoted in the press (The Financial Times, New York Times, The Art Newspaper, Artnews, The Art Market Monitor, Artnet, Artprice) and has recently published a peer-reviewed article on the impact of the pandemic on the public auction market with a comparison of the Covid-19 crisis versus the financial crisis and the 2016 crisis ( https://www.mdpi.com/2076-0752/10/4/74).