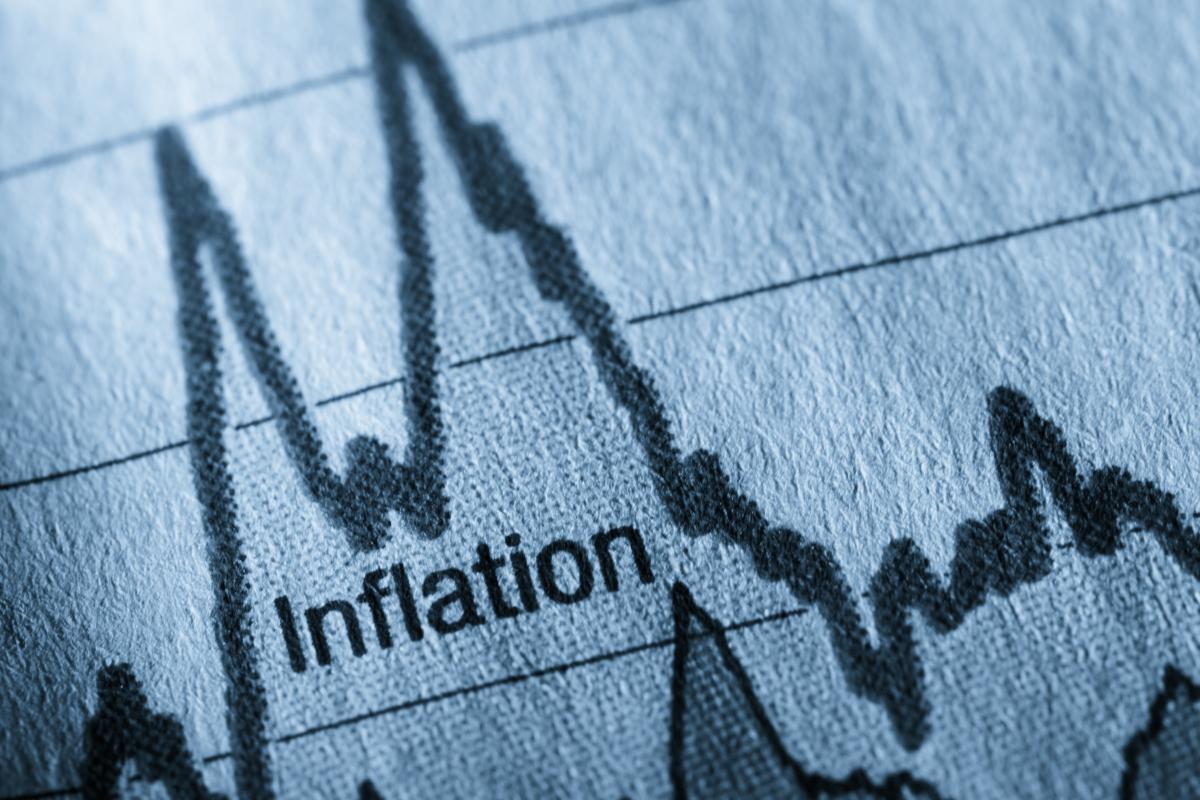 Inflation has been an important driver of macroeconomic markets recently and a hot topic of conversation among market participants. Governments and central banks around the world are deploying trillions of dollars worth of fiscal and monetary stimulus to battle the economic effects of COVID-19. This stimulus activity, combined with the gradual reopening of economies (that has created spikes in demand for goods and services), has piqued market participants’ focus on inflation. Some believe that the high inflation prints we’ve seen recently are transitory, while others think the price increases could persist for a longer period of time.

Unfortunately, both defining and measuring inflation accurately remain difficult. In this Street View, we’ll refresh a prior Street View from 2017 called Forecasting Inflation like a Data Scientist. We’ll summarize some of the challenges in forecasting inflation that we covered previously and provide a potential solution: analyzing inflation from many perspectives, just as a data scientist would.

Data scientists often gather as much data as possible to extract new insights on the problem or question at hand. Taking a data-science approach to forecasting inflation then might involve combining many forecasts, perhaps with various conviction levels, to form one, consolidated view. While that might sound fairly straightforward (e.g., calculate the conviction-weighted average of many forecasts), it does come with several non-trivial challenges. This Street View will first summarize those challenges and then suggest ways to seek to mitigate some of their effects.

Because of these challenges, it’s difficult, if not impossible, for a single metric to comprehensively describe or measure all aspects of inflation. How then might a market participant come up with a well-rounded, more accurate inflation input to their asset allocation decisions? One potential solution is to study forecasts from many angles by aggregating and normalizing forecasts of different types.

In the 2017 Street View, we plotted publicly-available forecasts of U.S. inflation. We’ll update that study with currently available information and discuss implications we can draw from it.

As a reminder of the methodology, we gathered U.S. inflation forecasts from a variety of sources, including market-based measures, forecasts by economists at banks and other financial institutions, and survey data. Included in this cross-section are forecasts of different definitions of inflation, including expectations for CPI as well as PCE, and at different horizons (e.g., inflation expectations for the next year, five years, 10 years). In effect, we are mixing and matching many different forecasts for U.S. inflation. For example, one forecast might be based on a survey of where people think prices will be over the next year, and another forecast might be a market-implied five year inflation forecast for the period beginning five years from now (i.e., five year, five year breakevens). In order to reconcile these proverbial apples and oranges, we normalize each forecast relative to its own time series by using its historical mean and standard deviation from 2016 to present. We then display a time series of vertically oriented distributions that helps visualize tails, skewness, and ranges of forecasts. The blue line connects the median forecasts each month. The light cyan shading captures the distributions in 2020; the light gray shading captures 2021 distributions. 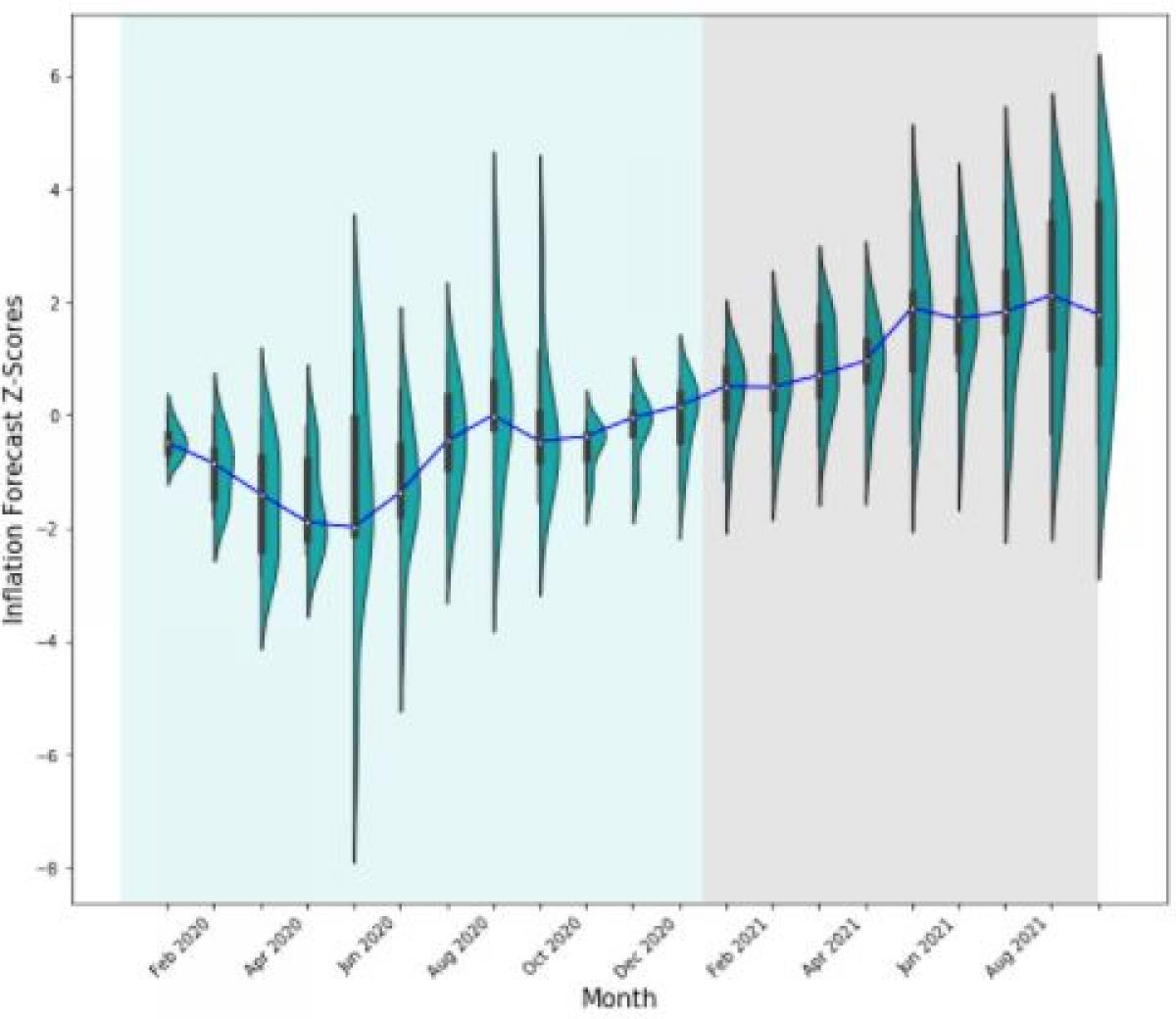 Sources: Bloomberg; FRED Economic Data; Federal Reserve Bank of Cleveland; Federal Reserve Bank of New York; and University of Michigan, Survey Research Center, Surveys of Consumers as of October 18, 2021. Z-scores are standardized scores that convey how far away the forecasts were from their respective historical means, measured in standard deviations. A z-score is calculated by subtracting the mean from the observed forecast and dividing by the standard deviation. Again, means and standard deviations are calculated using data dating back to 2016.

A few observations on these distributions:

One Step Further: Forward-Looking Inflation Forecasts as of October 2021

Exhibit 1 painted a picture of historical inflation forecasts from 2020 to September 2021. As we saw in the final distribution, September 2021 saw one of the highest normalized median U.S. inflation forecasts since 2020. Let’s take this analysis a step further by exploring what the forward-looking, raw inflation forecasts were as of the middle of October (i.e., the actual inflation numbers that forecasters are expecting in the future). To do this, we’ll narrow in on a very “apples-to-apples” subset of Exhibit 1 forecasts: what economists at banks and other financial institutions believe year-over-year (YoY) CPI will look like in the next several quarters through the end of 2022. We are comparing forecasts of the same type of inflation at the same horizon over time, and the sample size is still fairly large (the number of forecasts is 45).

Exhibit 2 plots the distributions of these raw YoY CPI forecasts for future quarters through the end of next year. That is, these are the forecasts made as of mid-October for reported YoY CPI in Q4 2021, Q1 2022, etc. from 45 different banks and other financial institutions. We use a similar visualization to Exhibit 1, with the blue line connecting the medians.1 Finally, the horizontal red line plots the latest 5.4% CPI print reported on October 13, 2021 as a point of comparison. 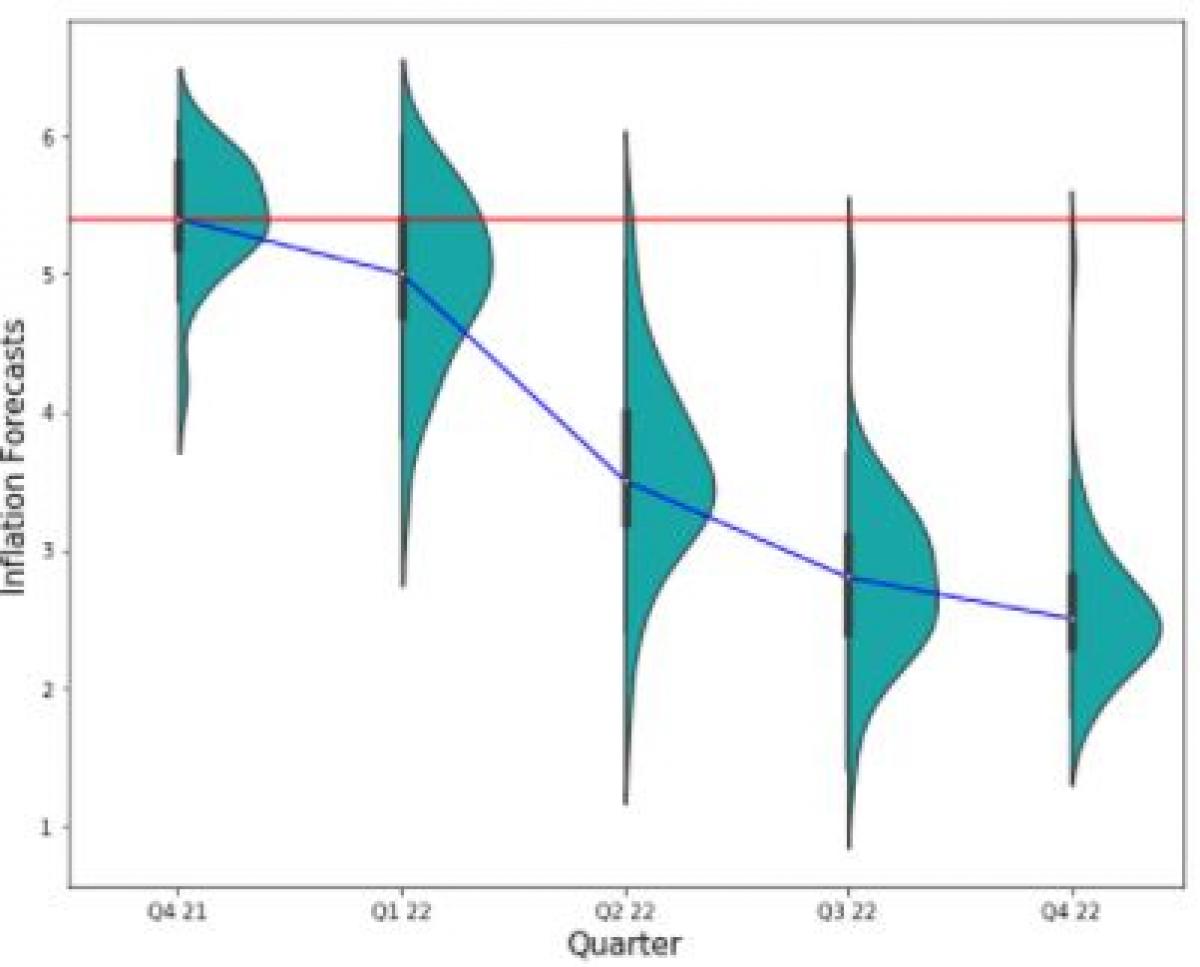 From this view, it seems like the majority agree with the Federal Reserve that U.S. inflation is transitory and will normalize in 2022. However, there are a select few contributors that forecast inflation staying at relatively elevated levels in 2022 (as evidenced by the elongated tails in the top right of the chart).

To wrap up, there are many challenges to overcome when analyzing forward-looking inflation, which is a key component of asset allocation decisions. In this Street View, we presented a couple of ways in which market participants can potentially construct a multi-angle picture of how inflation may change in the future.

The first was a refresh of our 2017 Street View, in which we gathered many future inflation views to understand how inflation forecasts have changed relative to history. We found that inflation forecasts are generally higher than where they’ve been over the last five years, but there’s a meaningful amount of dispersion.

The second analysis focused on forecasts for a particular definition of inflation (i.e., expected CPI YoY changes by economists) to understand the cross-section of inflation views for the coming quarters. It appears that most (although not all) believe that inflation will decrease next year, with the average Q4 2022 forecast sitting close to 2% (the Federal Reserve’s long-term inflation target).

Alex Botte, CFA, CAIA is a Vice President on the Client Portfolio Management team at Two Sigma Advisers LLC. She was previously at AQR Capital Management, where she most recently served as a Product Specialist for the firm’s Global Asset Allocation strategies. Prior to AQR, she worked in Prime Services at Barclays. Alex holds a Bachelors of Science in Applied Economics and Management from Cornell University. 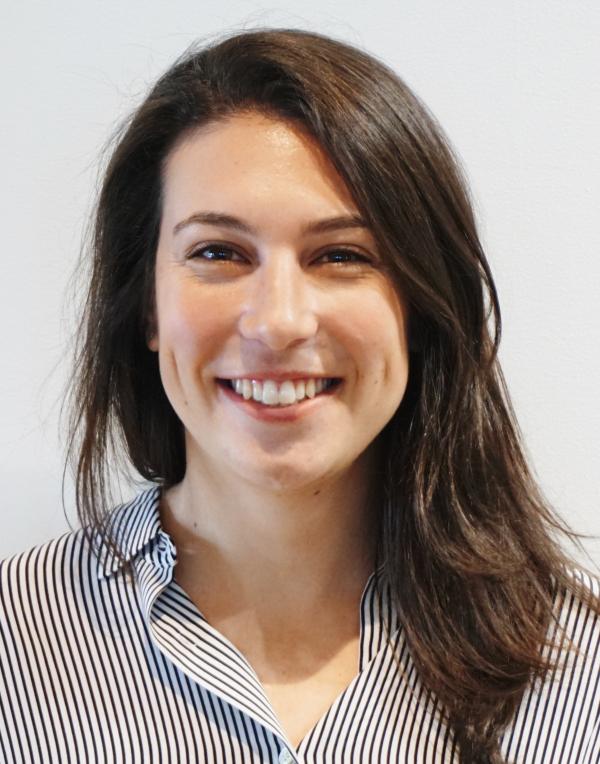 This article is not an endorsement by Two Sigma of the papers discussed, their viewpoints or the companies discussed. The views expressed above reflect those of the authors and are not necessarily the views of Two Sigma Investments, LP or any of its affiliates (collectively, “Two Sigma”). The information presented above is only for informational and educational purposes and is not an offer to sell or the solicitation of an offer to buy any securities or other instruments. Additionally, the above information is not intended to provide, and should not be relied upon for investment, accounting, legal or tax advice. Two Sigma makes no representations, express or implied, regarding the accuracy or completeness of this information, and the reader accepts all risks in relying on the above information for any purpose whatsoever. Click here for other important disclaimers and disclosures.