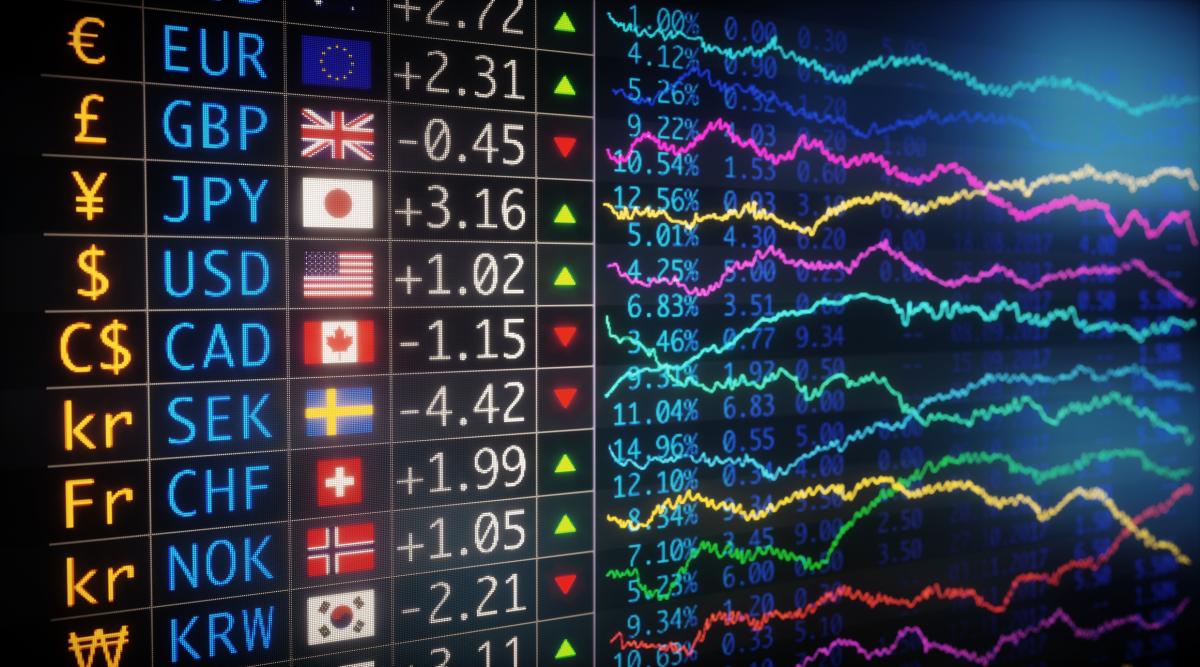 Cryptocurrencies like Bitcoin or Ethereum have received a significant amount of attention from investors over the last couple of years given extraordinary returns. However, the combined market capitalization of cryptocurrencies is still only between $2 and $3 trillion, compared to more than $100 trillion for the global stock market and $120 trillion for the global bond market.

All of these numbers pale against the foreign exchange (FX) market, where the total value traded was estimated to be $2.5 quadrillion in 2021, or $6.5 trillion per day according to BIS. FX trading is dominated by the US dollar, which is involved in more than 80% of the trades.

The foreign exchange market could be characterized as a trader’s paradise: 24-hour trading, low transaction costs, high liquidity, excellent data quality, and a variety of instruments like spot, forwards, swaps, and options. It also could be described as hypercompetitive and a zero-sum game.

In this research note, we will evaluate the performance of the most unconstrained and well-equipped foreign exchange traders – FX hedge funds.

We use the Eurekahedge FX Hedge Fund Index in this analysis, which has 11 hedge funds contributing monthly returns that are weighted equally. The track record of the index goes back to 1999, naturally with different constituents, and shows highly attractive risk-adjusted returns. The Sharpe ratio was 2.2 and the maximum drawdown was below 5% over the 22-year period. The performance has been flat since 2015, but it is an enviable track record for a hedge fund strategy.

Given the attractive performance of FX hedge funds, we would expect to see steadily rising assets under management. The returns are uncorrelated to stocks and bonds, and investors have become desperate for strategies that offer diversification given low expected returns of traditional asset classes.

However, the assets under management of currency traders as per BarclayHedge have peaked in 2007, which is particularly surprising as FX hedge funds had virtually no drawdown during the global financial crisis of 2009. Investors would have been eager to allocate more capital given that these managers preserved and compounded capital during that severe market downturn.

It is worth highlighting that the total assets under management of currency traders are $33 billion as of Q3 2021, which equates to a mere 1% of the total assets of the $3 trillion hedge fund industry.

In order to reconcile the stellar performance of FX hedge funds and relatively low assets under management, we will consider another index, specifically the HFRI Macro Currency Index, which also equal-weights monthly reported returns.

In contrast to the Eurekahedge FX Hedge Index, this index shows a flat performance since its inception in 2007. Stated differently, FX hedge fund managers have been unable to generate any profits over the last 14 years.

The performance of the Eurekahedge FX Hedge Index allows hedge fund managers to import their past returns, but only ones with good performance will do that, which means the returns are overstated and do not reflect the hyper efficient and competitive nature of foreign exchange markets.

HFR does not allow this and makes their index a better reflection of realistic returns from FX trading. Naturally, this means that FX trading is unprofitable on average. 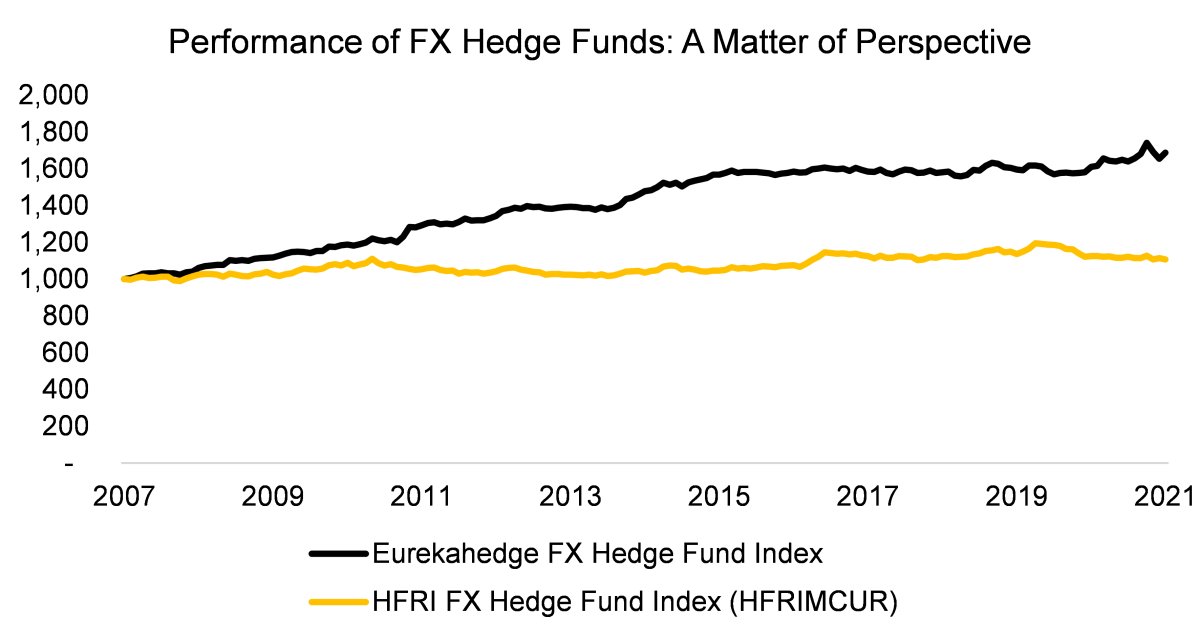 Although hedge fund managers have been unable to generate alpha within foreign exchange markets, there is a vast amount of academic literature that supports factor investing across asset classes, including in FX markets. One of these trades, the FX carry trade, where investors buy high-yielding currencies financed from low-yielding ones, eg long AUD and short JPY, is thought of being the largest trade in the world.

Investment banks have started offering these risk premia indices and HFR aggregates these into indices. The Carry Currency Index was launched in 2006 and therefore has a track record across a complete market cycle. We observe that the index suffered a massive drawdown during the global financial crisis when investors fled high-risk (high-yielding) currencies for safer havens. There has been no recovery in its value since then and the index remains at an 84% loss from its peak in 2007.

The Value, Momentum, and Volatility indices were launched thereafter. However, all of these are trading below where they were issued, which implies negative risk premia. Although factor investing has not worked particularly better in other asset classes like equities in recent years, it is difficult to explain why none of these academically well-established strategies has generated positive excess returns in FX. Many quantitative strategies do not survive once launched given transaction costs, but these are very low when trading FX.

It is not very surprising that FX trading is hard. Capital markets have become hyper efficient and news are immediately digested by an army of competing algorithms and traders.

Generating alpha on equity markets is equally difficult as highlighted by the flat performance of the Credit Suisse Equity Market Neutral Index, which has generated a zero return in the 17 years between its inception in 2004 and 2021. However, most equity hedge funds can add beta exposure and, given the rising nature of stock markets, show positive returns. It does not make them good products, only sellable. Unfortunately, FX hedge funds do not have the same luxury as foreign exchange markets are zero-sum games. For every winning trade, there is symmetrical losing one.

It is worth highlighting that although FX trading is challenging for the investment management industry, it tends to be profitable for banks and brokers, especially those with large retail businesses. It is a shark tank, and if you are not the shark…

A Horse Race of Liquid Alternatives 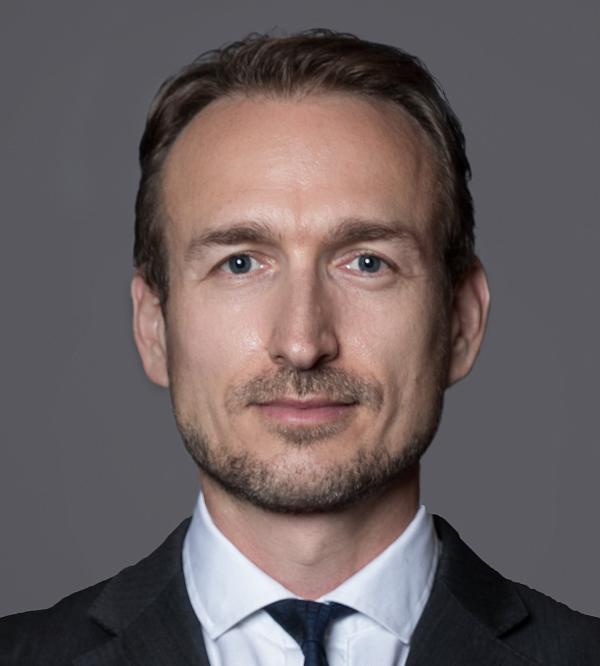 Before that Nicolas worked at GIC and Citigroup. Nicolas holds an MSc from HHL Leipzig Graduate School of Management, is a CAIA charter holder, and enjoys endurance sports (100km Ultramarathon).