The SEC Takes Aim at SPACs 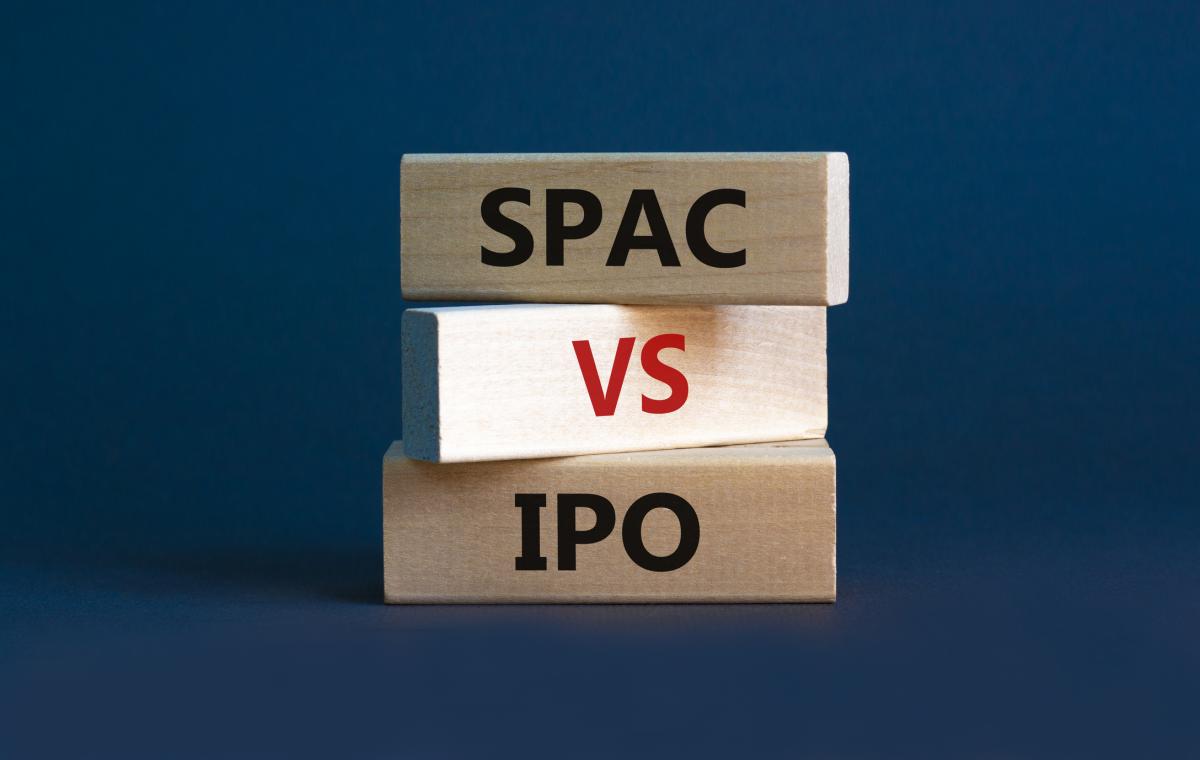 By Vik Mittal, Founder and CIO of Meteora Capital.

While the recent SEC proposal for new rules pertaining to SPACs caused quite a stir, the intention in the Commission’s own words, is to increase investor protections. SPACs have been on a bumpy road since the second quarter of 2021 and performance of the asset class has been hindered by negative headlines as well as the financial and fundamental characteristics of many deSPAC targets. As we enter the 60-day public comment period for the newly proposed rules, a sampling of the recent headlines around SPACs tend to veer towards the melodramatic versus digging into what the SEC may be attempting to accomplish.

Unlike the exaggerated headlines, our view is that SPACs are not “dead” given the recent proposed rules nor is the SEC’s intent to stymie sponsors and investors from participating in the SPAC market. Regarding the agency’s motivation, SEC Commissioner Gensler stated:

“[the proposed rules], if adopted, would strengthen disclosure, marketing standards, and gatekeeper and issuer obligations by market participants in SPACs, helping ensure that investors in these vehicles get protections similar to those when investing in traditional initial public offerings (IPOs)" and “third parties involved in the sale of the securities such as auditors, lawyers, and underwriters, should have to stand behind and be responsible for basic aspects of their work.”

This is clear; the SEC seeks to ensure that full and fair disclosures are a necessity of the SPAC transaction process, as well as increasing liability of front-end underwriters of SPACs for the ultimate business combination. While the specific mechanics will need to be better analyzed following the 60-day comment period, it appears the SEC’s goal is to introduce greater liability to SPAC underwriters similar to their liability on regular way IPOs.

While the proposed rules may dampen SPAC activity in the near-term, ultimately, it is our view that this course of regulatory action will lead to a healthier, more sustainable asset class. Even prior to the recent proposed rules, many negative aspects of SPAC transactions such as overly optimistic projections, and failure to adequately conduct due diligence by sponsors had been ‘self-regulated’ by investors. Recent SPAC transactions have experienced redemption rates often exceeding 90% of the SPAC cash in trust as investors redeem en masse and look to analyze target companies post-business combination.

In essence, the redemption mechanism afforded to public SPAC shareholders is a valuable governing mechanism for SPACs. Every public market shareholder (both SPAC IPO and secondary market buyers) is afforded on average 3-6 months post-business combination announcement to review the projections and business plan of a target company – whereas traditional IPOs only afford select institutions the opportunity to review business plans and discuss financial models with underwriting research analysts during a narrow window ahead of pricing and public trading.

Regarding recent market volatility and post deSPAC price performance (which has been comparable to regular way IPOs recently), it is important to remember there are distinct investors in the SPAC market pre-deSPAC and post-deSPAC. Pre-deSPAC, a nuanced opportunity exists where the sacrosanct “cash in trust put right” (redemption ability) creates a widely perceived low-risk, fixed income alternative with equity upside via the embedded optionality in the common shares and warrants. It may be easier to “pick on” SPACs given the easy $10.00 reference price point for all SPAC transactions to track performance versus regular way IPOs, especially over the recent SPAC phenomenon as SPACs have skewed towards less mature business models relative to historic SPAC target financial characteristics. As much of a lightning rod that notable investor and serial SPAC sponsor Chamath Palihapitiya is, this chart he recently posted to his twitter account on April 2, 2022 is informative. It quantifies the poor performance of deSPAC companies with that of regular way IPOs over the preceding one-year period. 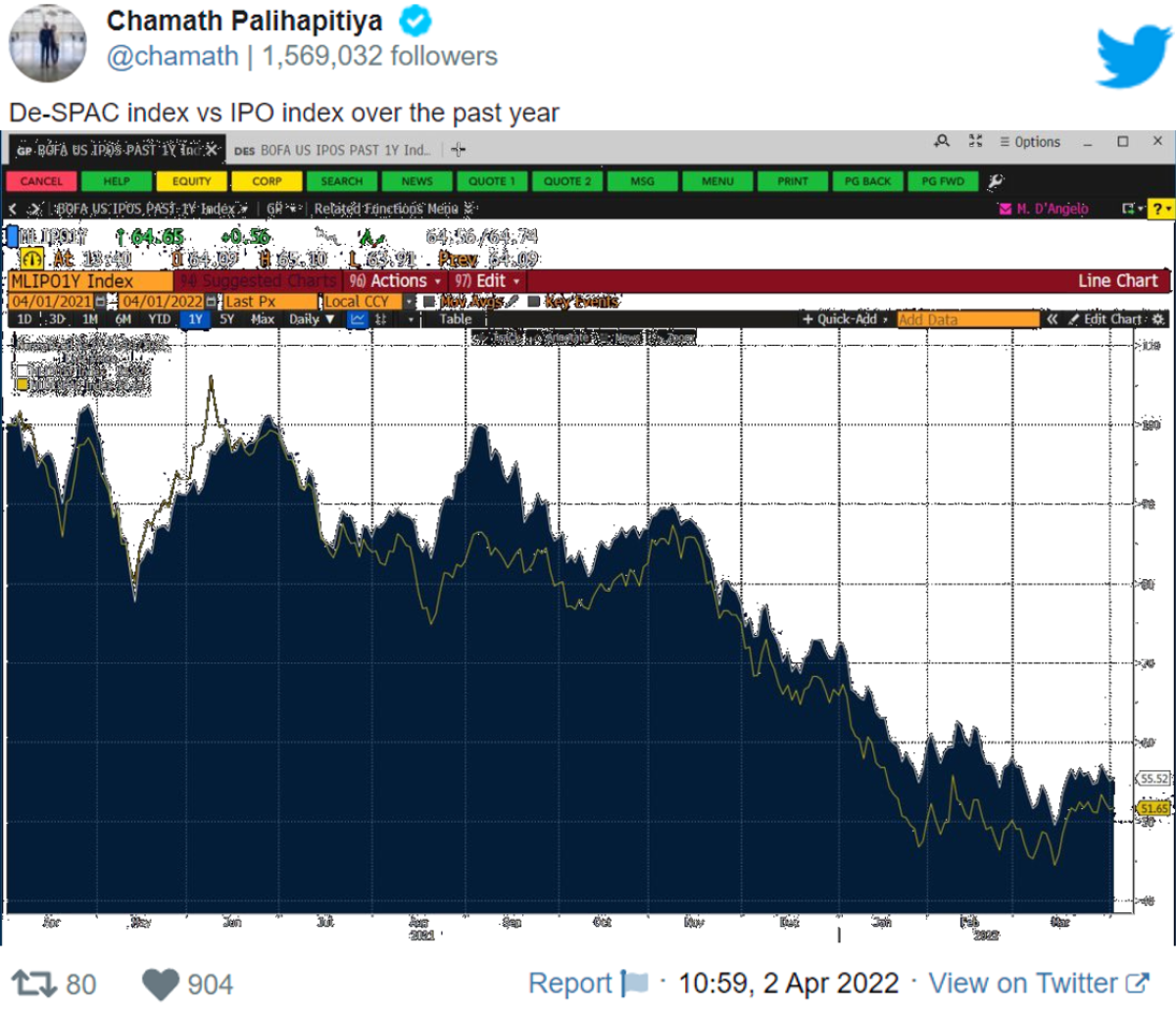 Prior to the business combination, investors appreciate publicly traded SPACs in economic environments like we are currently experiencing. SPACs offer a compelling investment strategy relative to other asset classes with lower correlation, low volatility and an absolute return nature of the product. Additionally, pre-business combination SPACs are among a limited number of investment strategies positively correlated to interest rates as the cash in trust held by SPACs benefits from interest income generated by higher-yielding, shortduration T-bills. Finally, the opportunity set for the public SPAC arbitrage/event-driven strategy may be well positioned for any rebound in financial markets given the aforementioned equity optionality upside embedded within the SPAC product.

In closing, we view the recent SEC proposals as neutral to positive for the asset class. By creating greater liability for SPACs, their underwriters and advisors, deSPAC companies are likely to have a greater focus on historical performance in combination with projections rather than simply projections. While this may limit the number of “early stage” deSPAC targets and shift the focus to more mature businesses, we believe it will create more stability and fundamental analysis of SPAC transactions as a path to value creation and liquidity for target companies via the SPAC structure, including being used for reverse mergers, corporate carveouts, up-listings and three-way mergers and/or Reverse Morris Trust transactions. Pre-business combination SPACs still provide one of the best risk adjusted return profiles available to investors and we do not expect these latest changes at the SEC to shut down the asset class altogether, but rather provide more clarity and protection to investors.

Meteora Capital is an investment firm specializing in SPAC-related instruments in both public and private companies. Meteora’s mission is to be a best-in-class investment firm, aspiring to be a true end-to-end partner in the SPAC ecosystem as it continues to build on its unique, global investment platform. Unlike most players in the space, Meteora Capital focuses on both public and private equity investments, contributing the greater reach and experience across the SPAC ecosystem. 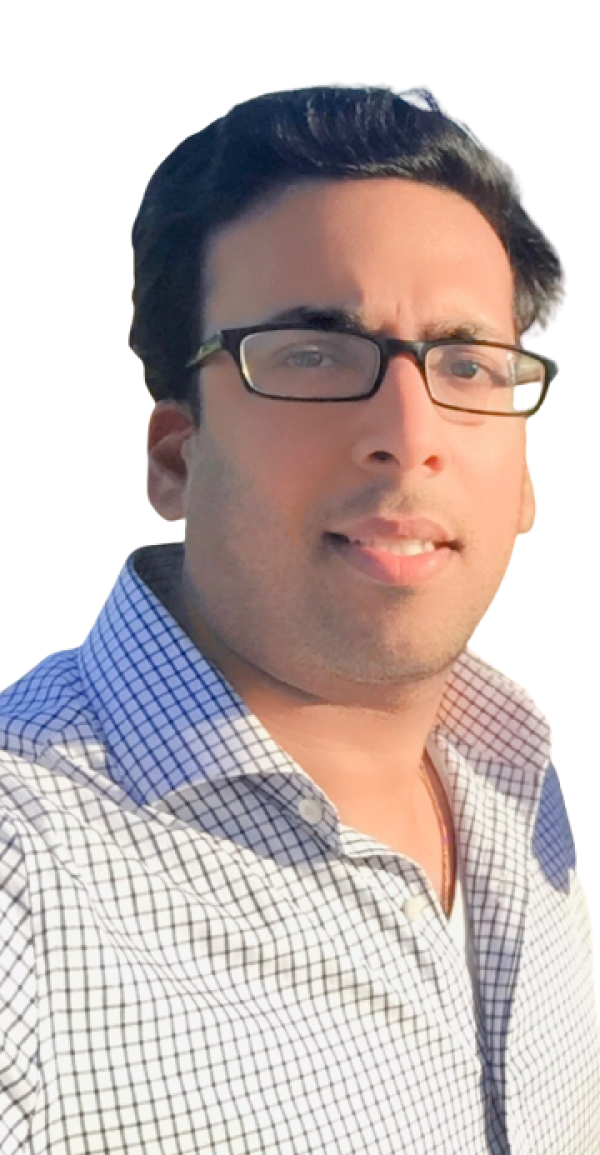 Vik Mittal is the Founder and CIO of Meteora Capital. Over Vik’s 20 years as an investment banker at Raymond James and on the buy side as a principal investor, primarily at Glazer Capital, LLC from 2005- 2021, he has deployed capital across event driven investment strategies ranging from merger arbitrage/event equities, SPACs (12 years of direct principal investing experience), converts, event-driven high-yield/loans to structured financings. Prior to transitioning to the buy side, Vik was part of the founding team that launched Raymond James’ TMT investment banking practice in Palo Alto, CA focusing on mid-market M&A and private placements. Vik earned a B.S. in Finance from University of Florida, summa cum laude, and earned an M.B.A from NYU Stern School of Business. Vik is also a CFA holder. Please email Info@MeteoraCapital.com to learn more. www.MeteoraCapital.co