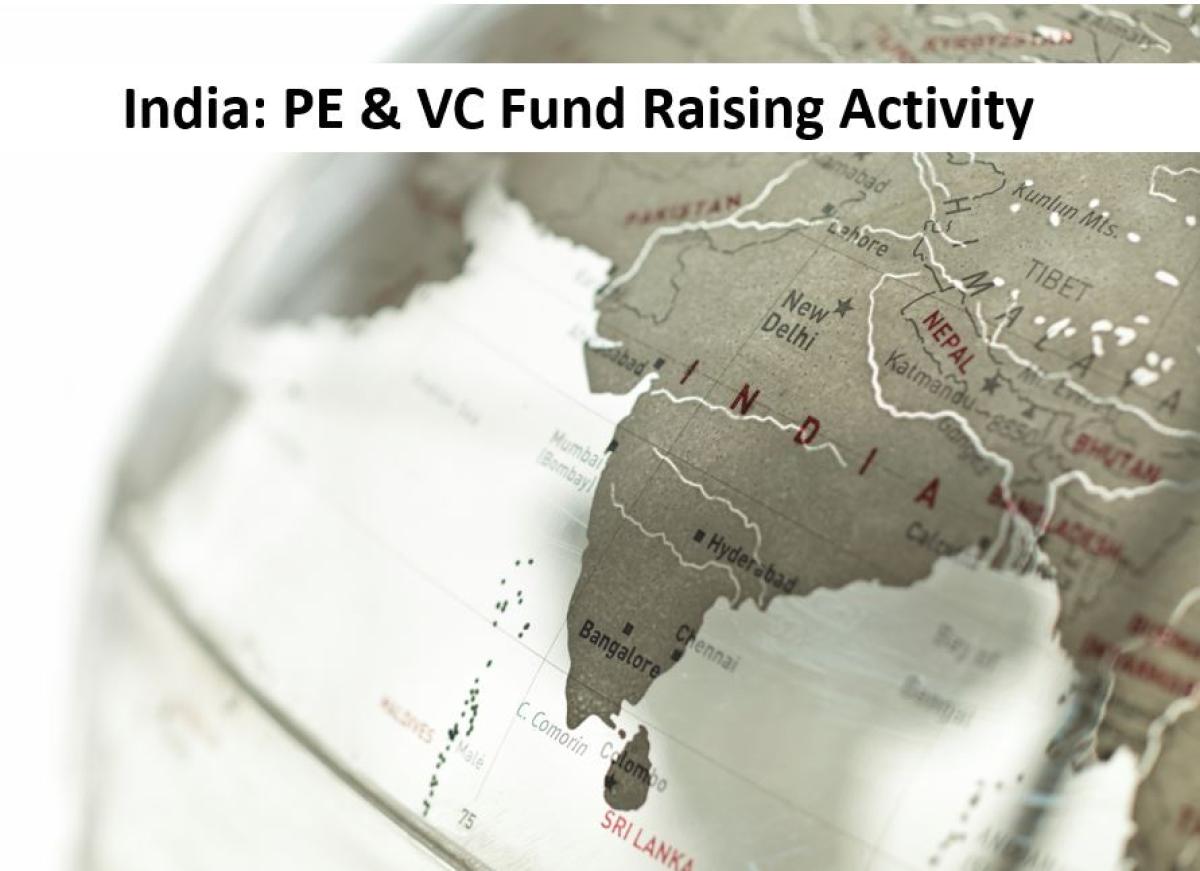 In 2020 VC fundraising in India was at a record $3.2 billion, despite the Covid-19 pandemic (Figure 1). The high level of fundraising was driven by three large funds, accounting for 60% of the total for the year. Two were closed by Sequoia Capital India: India Venture Fund VII ($525 million) and India Growth Fund III ($825 million). The other fund was Elevation Capital’s Fund VII ($400 million).

VC fund raising in 2020 was a new record despite Covid-19, driven by smaller number of funds raising larger amounts of capital: 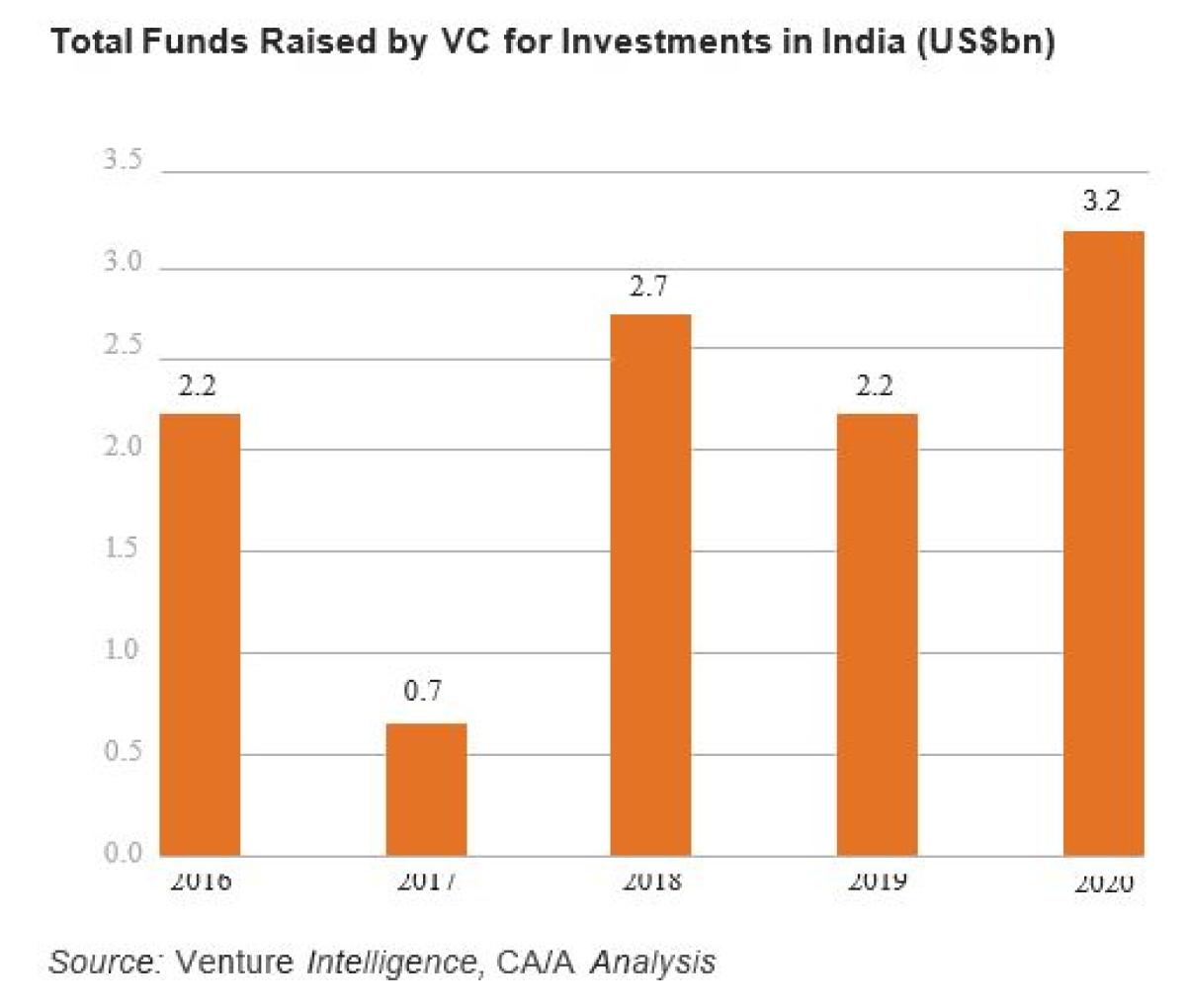 On average, the top five fundraising VC funds each year take two-thirds of the total capital raised. Notably these five VC firms accounted for over 50% of total capital raised in the last 5 years. As shown in Figure 2, Sequoia Capital India leads the pack, with significant fund raising in each of the last 5 years. They are followed by Accel India, Lightspeed Ventures, Matrix Partners and Elevation Capital. This group of five has a long track record in India having operated for ranging between 10 and 15 years in the market.

Top group of 5 VCs accounted for over 50% of cumulative capital raised in last 5 years: 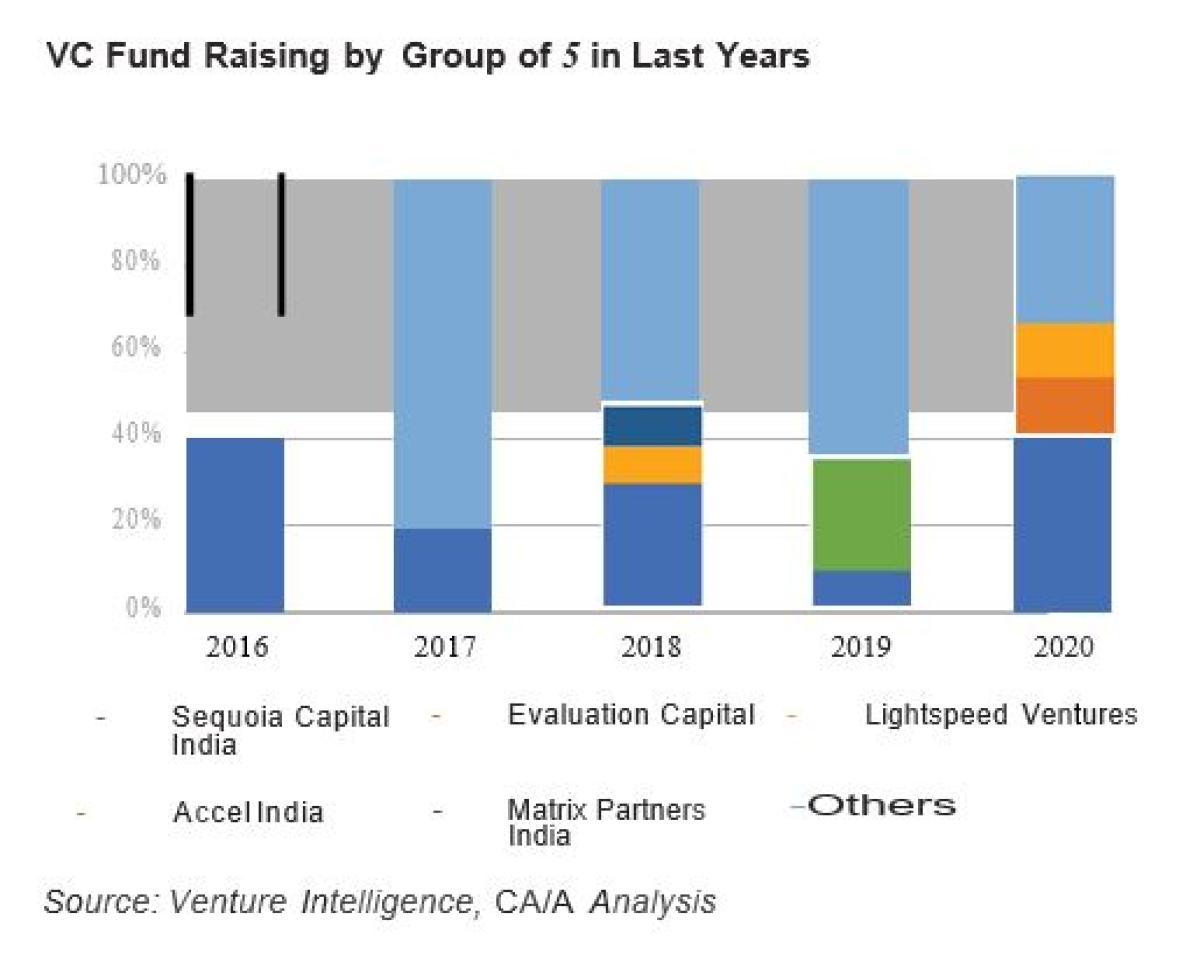 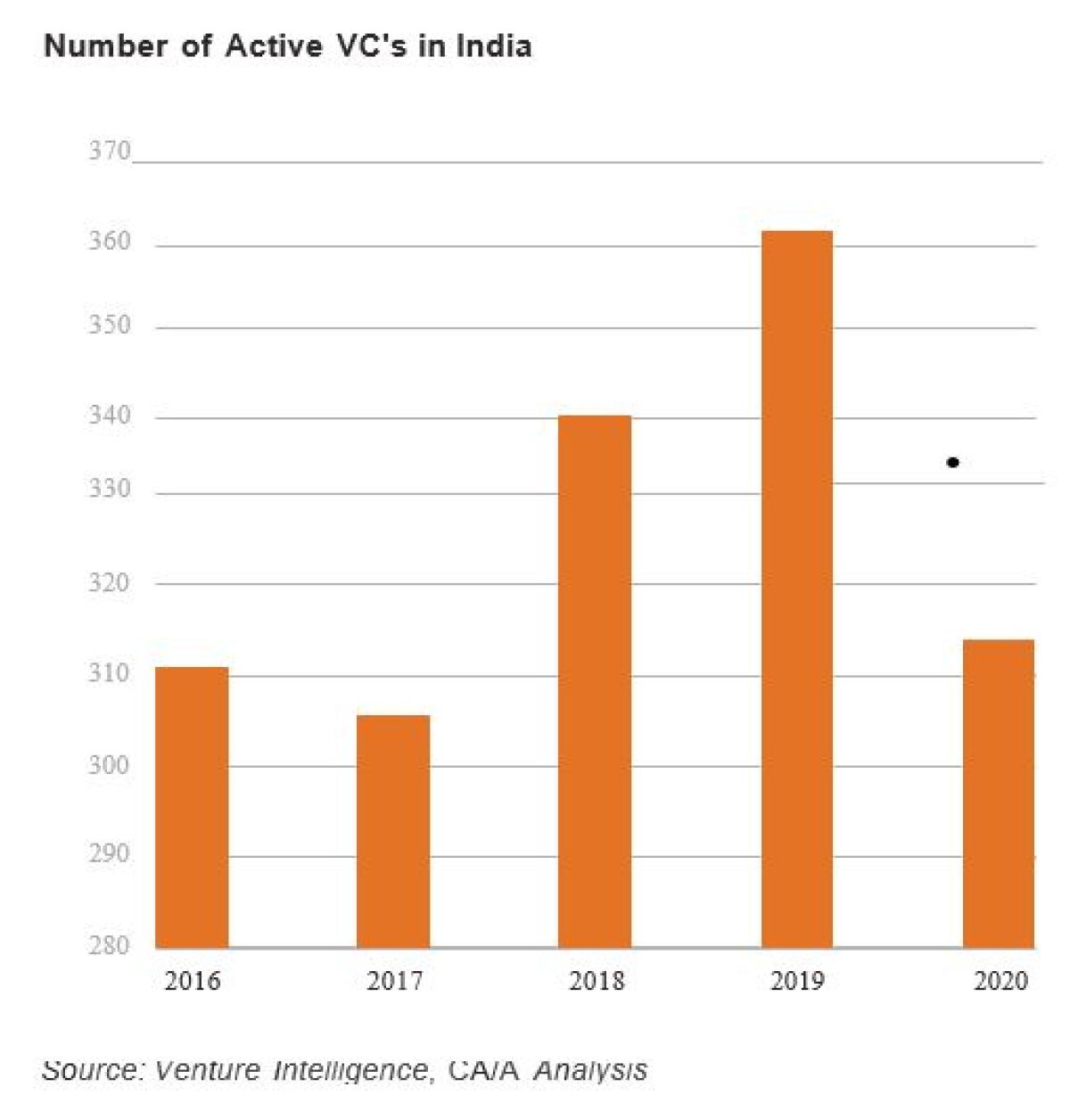 The new VC players who entered India market in 2020 were also active. The top 10 active new VCs are shown in figure 4. They were able to do multiple deals in 2020 despite the challenges from Covid-19. 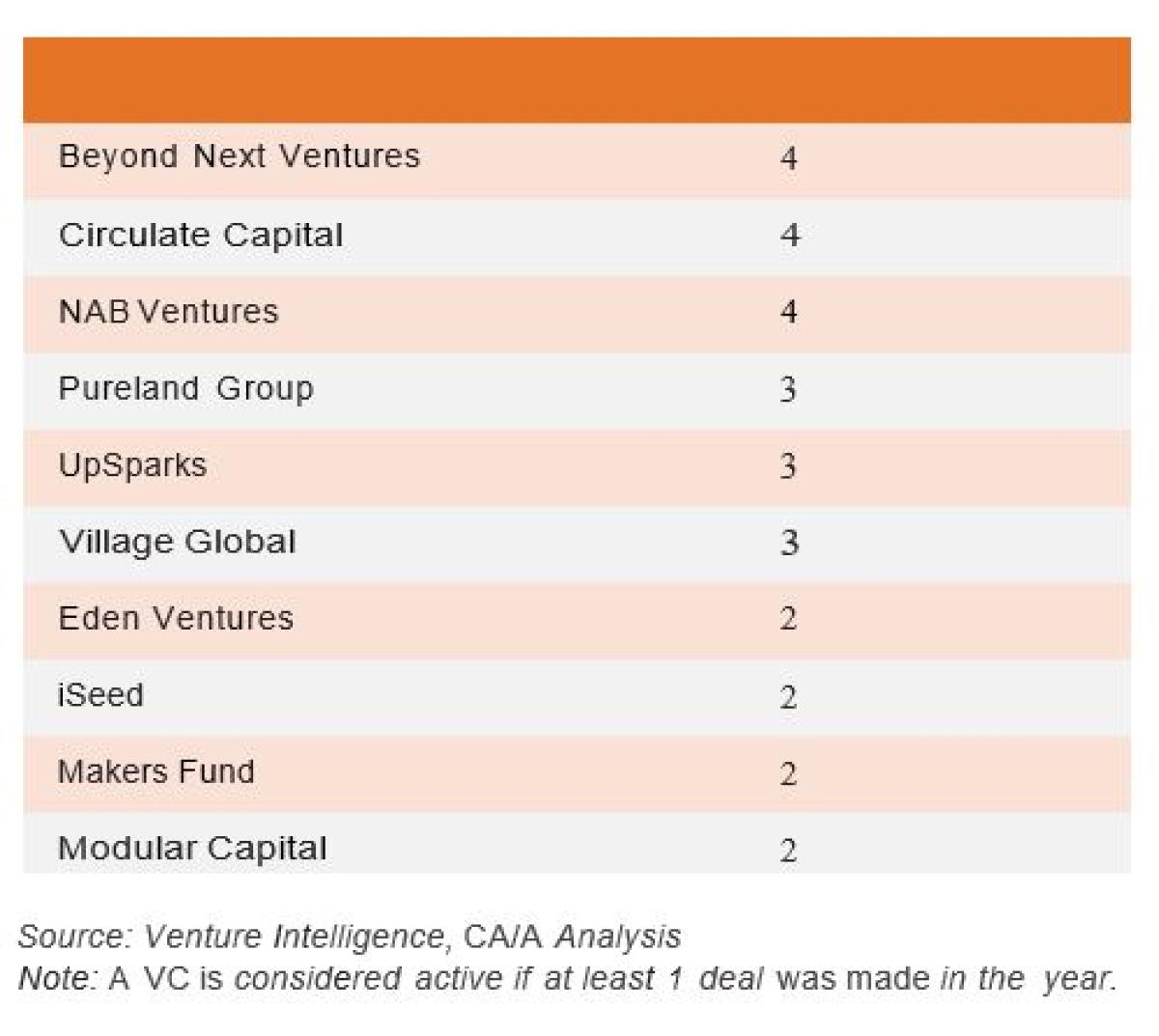 In 2020 PE fundraising in India recorded a lower level of $1.5 billion due to the disruption caused by Covid-19 (Figure 5). This trend is in line with the global PE fund raising trend. The number of funds with successful fundraising in India was only 12, which was fewer than half the total of the last four years average. Like VC fundraising, there was a flight to quality in 2020 as LPs were more interested in the large well-established funds. Notably, the two largest funds raised in 2020 accounted for 85% of 2020 total and they are specialized funds. Edelweiss Alternative Asset Advisors raised $900 million for Edelweiss Special Opportunities Fund III (ESOF III), focused on providing structured credit to Indian companies. Quadria India raised $401 million for Quadria Capital Fund II, a healthcare-focused fund. They are looking to deploy the majority of the capital in India, as they see greater spending in healthcare post-pandemic.

Fund raising in 2020 dropped…only 12 funds raised capital, which is about 48% of last 4-year average: 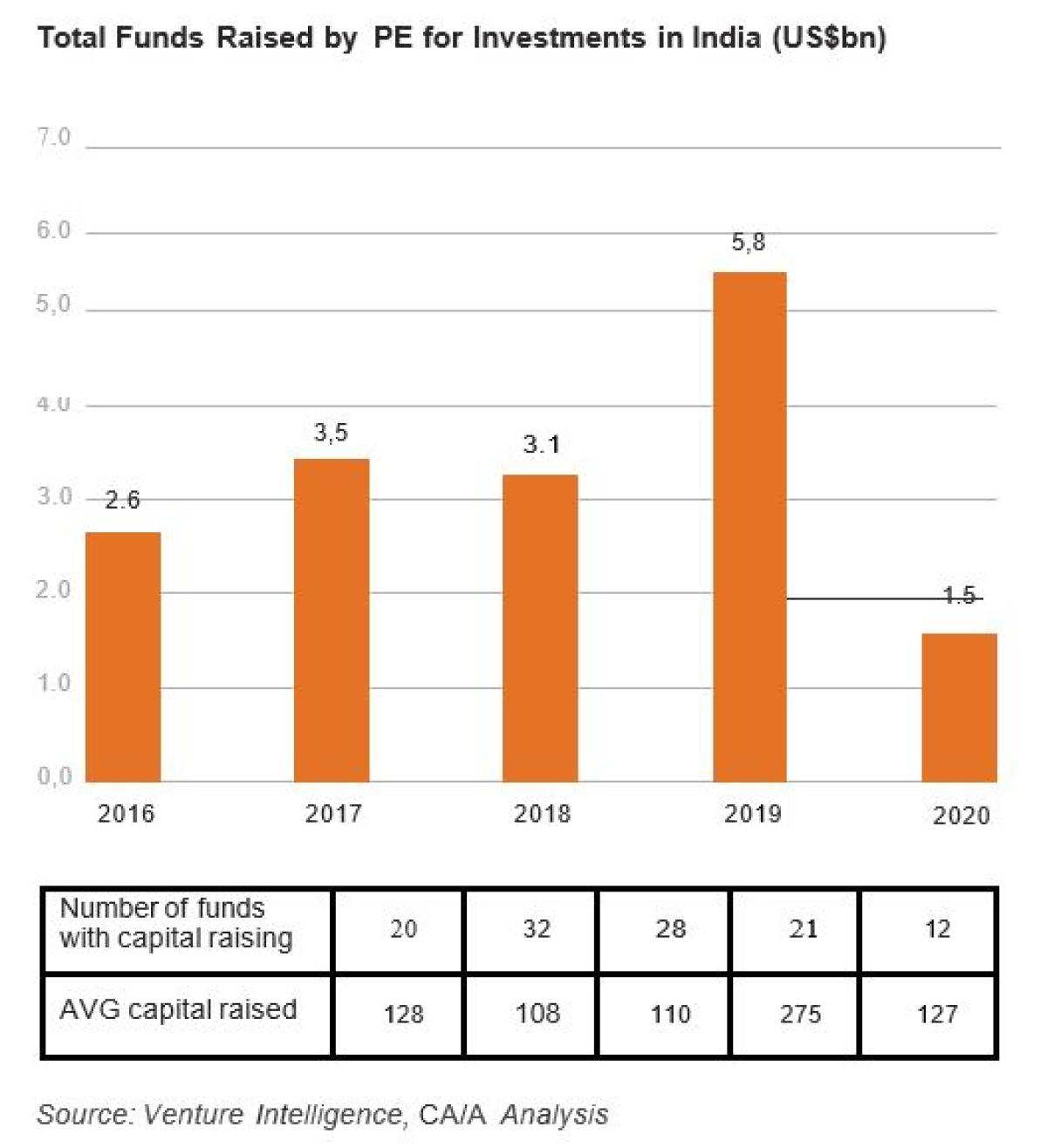 The concentration of fundraising by the top PE firms is not as high as that of VC firms. The top five PE firms by fund raising accounted for 37% of total capital raise in the last five years, compared to 50% for the top five VC firms. As shown in the figure below, the top five PE firms by fundraising are Edelweiss, ChrysCapital, Kotak PE, Apis Partners and Kedaara Capital. Edelweiss stood out for the large amount of funds raised in 2019 and 2020. 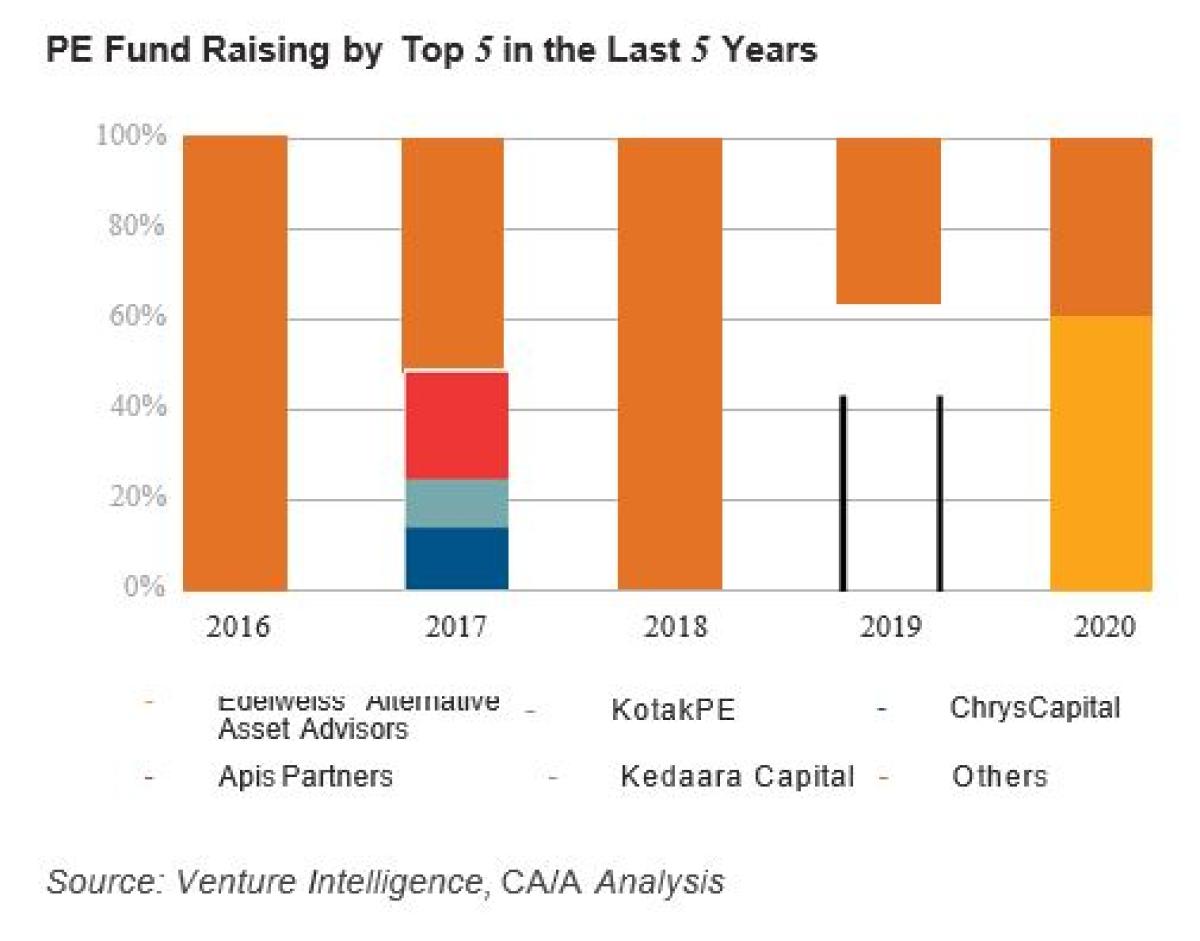 The number of active PE firms has been stable at around 500 a in the last 5 years. According to an EMPEA 2019 LP survey, India is ranked third out of 10 emerging markets, after Southeast Asia, and China. Given the high level of interest in India from LPs, the number of active PEs is expected to remain strong in near future.

The number of Active PE in India in last 5 years has been steady around 500: 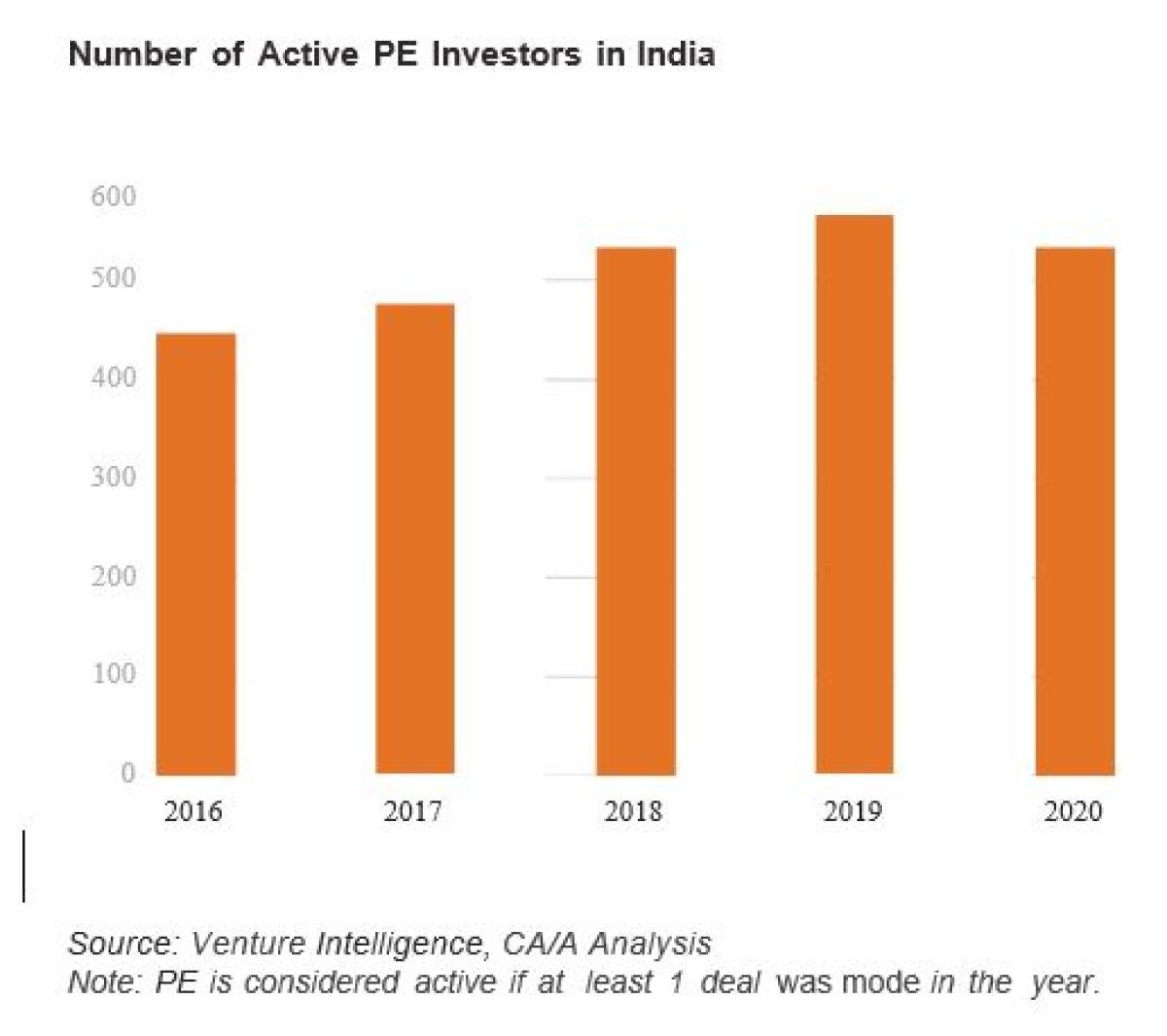 Jack Wu is a Senior Director at CapitaLand Investment Management, and he is responsible for  acquisitions and divestments for private equity real estate funds. Jack has over 15 years of institutional investment experience in Asia Pacific private equity real estate. Prior to joining CapitaLand Investment Management, Jack  served  as  Director  of   Content,   Asia   Pacific at CAIA Association. He also served as investment professional at  fund  manager  -  Credit  Suisse  and SC Capital Partners - focusing on Real Estate asset class where he completed over $800 million of direct investments across Asia Pacific markets, and across real estate types. 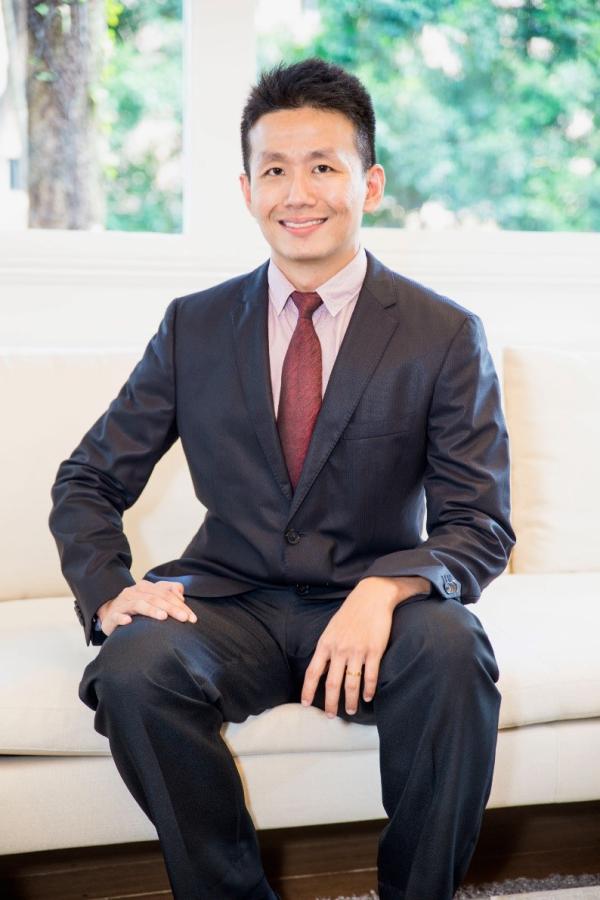