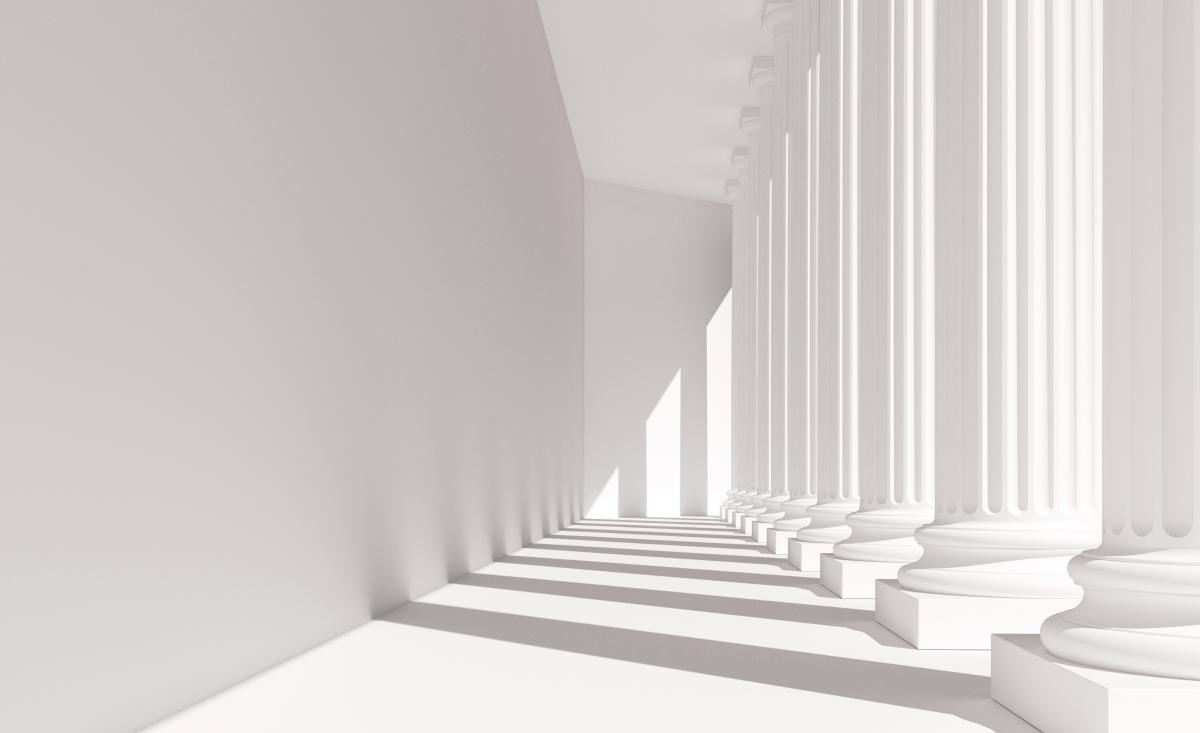 Much has been written on the U.S. Securities and Exchange Commission’s proposal requiring U.S.- listed companies to disclose information on climate-related risks. What is less understood is how these proposed rules may affect private markets — in particular, the portfolios of U.S.-listed general partners (GPs), where emissions generally count as Scope 3 Category 15 (financed emissions) in a fund manager’s reports.[1] In reality, the rule may represent the camel’s nose under the tent as the SEC indirectly brings climate transparency to private companies — albeit for a limited subset.

The SEC’s proposal would require disclosure of Scope 1 and 2 emissions, and Scope 3 emissions’ categories, if deemed material.[2]

For companies in the asset management and custody banks Global Industry Classification Standard (GICS®)[3] subindustry, which includes U.S.-listed GPs with significant private holdings such as KKR & Co. Inc., The Carlyle Group and Blackstone Inc., financed emissions accounted for 99% of their total emissions footprint (see exhibit below). However, where companies in this subindustry disclosed data, it was partial, accounting for as little as 7% of their total assets under management.[4] 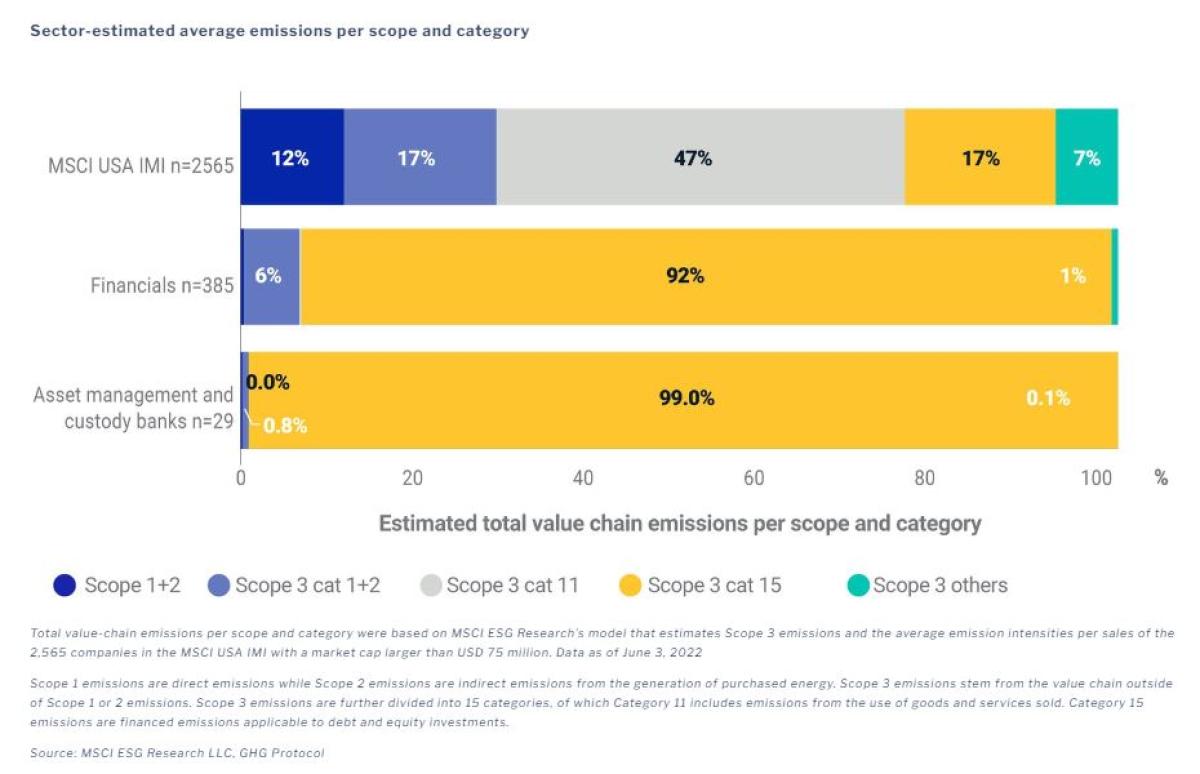 The SEC’s proposed climate-disclosure rule may draw a line between private and public GPs in the U.S., imposing a tougher burden on public GPs. If adopted, the proposal would require public U.S.-listed GPs to report their portfolios’ emissions footprint. Using Burgiss data on private holdings, we estimate that 11% of global privately held capital would be affected.[5] That’s a small but meaningful share of the world’s estimated USD 5.4 trillion in privately held assets. The greatest regional shares of private capital affected are in the Pacific (14%) while the lowest are in the Middle East and Africa (see exhibit below).

Share of global private capital held by listed US GPs 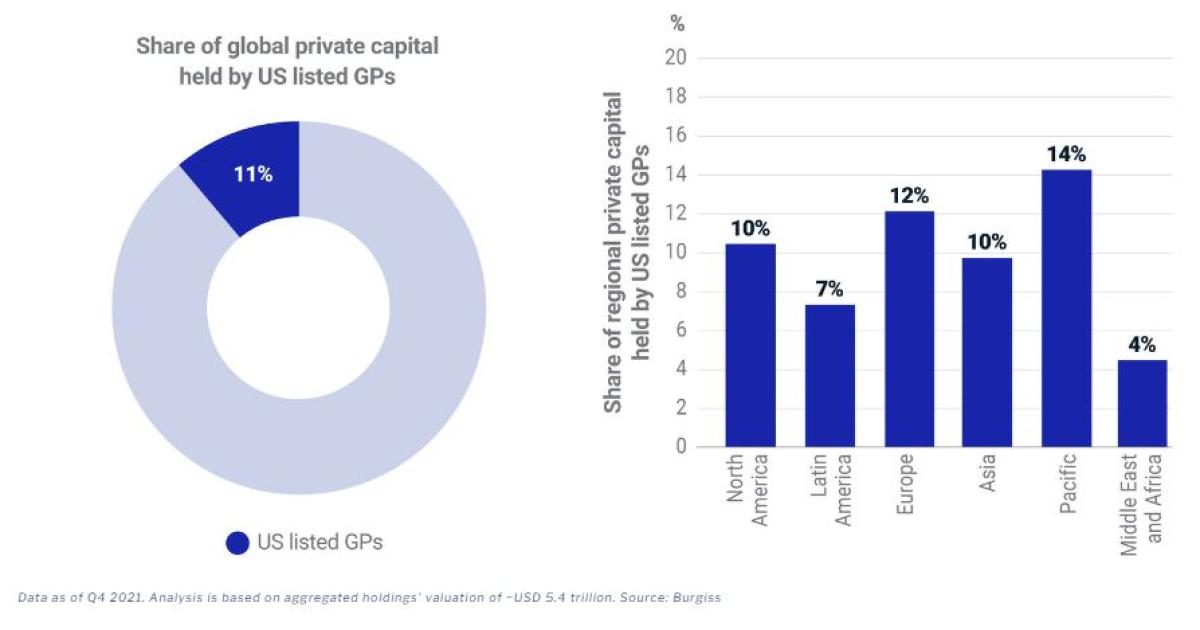 Public US GPs shifting away from carbon-intensive assets

Observers have criticized a shift of carbon-intensive assets to private markets or to buyers with weaker environmental commitments.[6] We estimated that U.S.-listed GPs were more exposed to companies that had a higher weighted average carbon intensity than companies held by private U.S. GPs, based on estimates of Scope 1 + Scope 2 carbon intensities.[7]

U.S.-listed GPs had greater exposure to companies with carbon intensities in the “very high” band (exceeding 525 tons CO2/USD million of sales), largely attributed to energy, materials and utilities companies. In contrast, the distribution of carbon-intensity estimates for private GPs skewed toward the “very low” carbon-intensity band (less than 15 tons CO2/USD million of sales), with companies typically in the information technology and communication services sectors.

The share of investment flow by listed GPs to carbon-intensive companies appears to be decreasing. As of Q4 2021, nearly one-fifth of the listed GPs’ long positions in the 10 most-carbon-intensive subindustries was from investments that originated in the 2008 to 2014 period, compared to less than 10% in the case of private GPs. By the 2015 to 2021 period, however, U.S.-listed GPs had noticeably reduced the investment flow share to this subindustry segment at a faster rate than their private counterparts.[8] 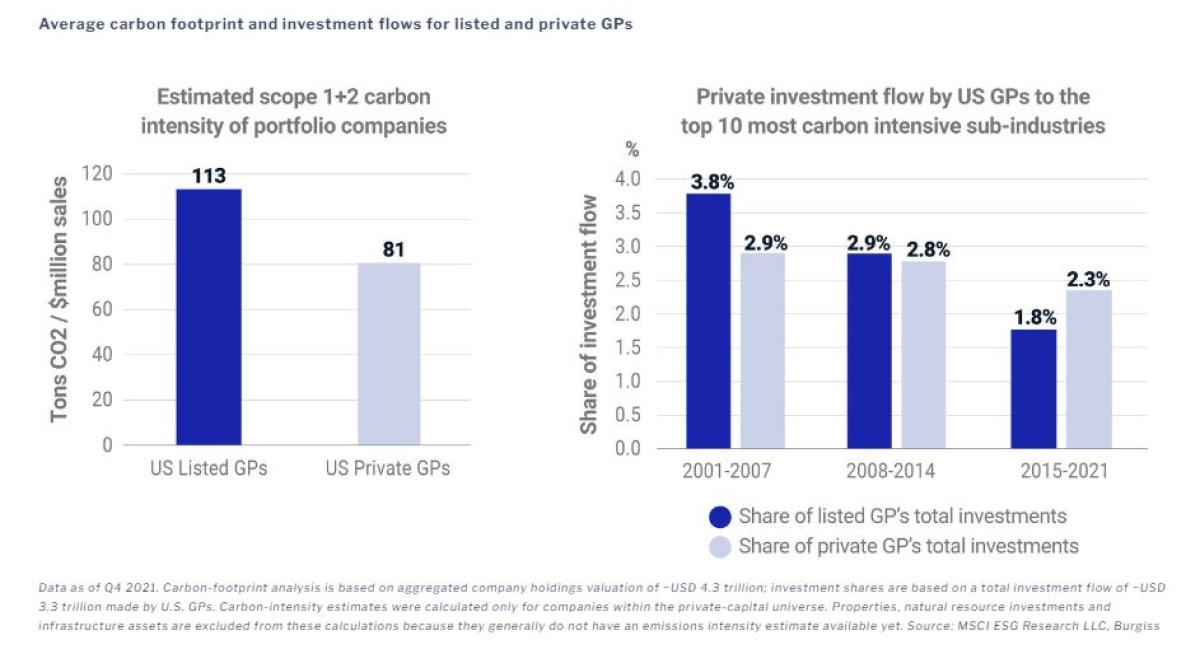 While the SEC’s current focus is on public companies, MSCI and Burgiss estimate that climate disclosures by listed U.S. GPs may shed a light on 11% of global private capital. Such disclosures may open the door to further climate-disclosure rules affecting privately held companies.

[1] According to the GHG Protocol, this category includes Scope 3 emissions associated with the reporting company’s investments in the reporting year not already included in Scope 1 or Scope 2. This category is applicable to companies that provide financial services.

[4] Among the four private equity companies that submitted emissions data to the CDP, only Intermediate Capital Group, reported emissions for their investment portfolio, which covered 7% of its total assets under management (CDP data as of October 2021).

[5] Data as of Q4 2021. Analysis is based on aggregated holdings valuation of ~USD 5.4 trillion. Source: Burgiss

[7] Carbon-intensity estimates were calculated only for companies within the private-capital universe. Properties, natural resource investments and infrastructure assets are excluded from these calculations because they generally do not have an emissions intensity estimate available yet. Source: MSCI ESG Research LLC, Burgiss

[8] Out of 158 GICS subindustries, the top 10 are ranked by the average carbon-intensity estimates (Scope 1 and Scope 2) of the underlying companies in the Burgiss universe, weighted by the holdings’ valuations. The top 10 subindustries are: independent power producers and energy traders, construction materials, electric utilities, coal and consumable fuels, multi-utilities, marine, industrial gases, steel, airlines and aluminum.

Rumi Mahmood is a member of the ESG Research team where his focus is primarily on analysing funds. 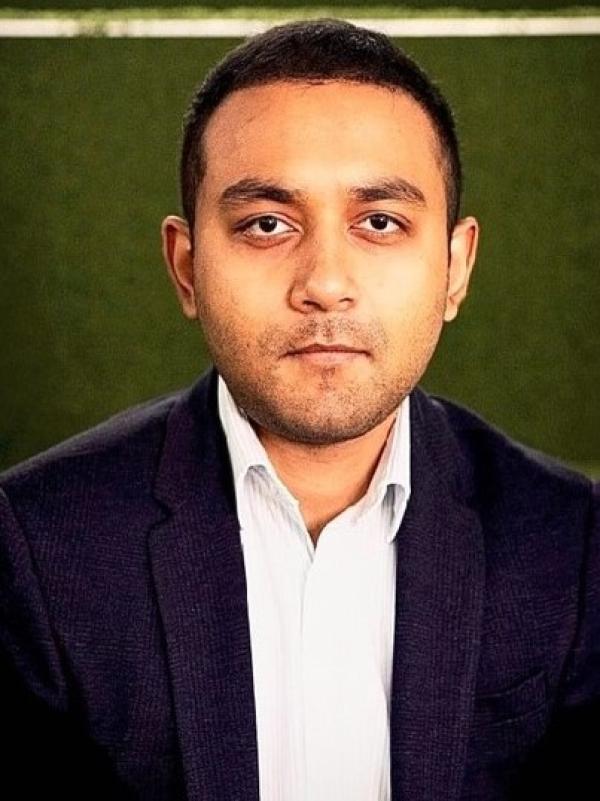 Previously, he was Head of Fund Research and Selection at JP Morgan - Nutmeg. Prior to that he worked at BNY Mellon in fund structuring and before that at Shell in Carbon capture and storage. Rumi received a master’s degree in engineering from the University of Manchester and holds the CFA certificate in ESG investing.

Umar Ashfaq is part of the MSCI ESG Research team focusing on the North American utilities sector and aerospace and defense industry. 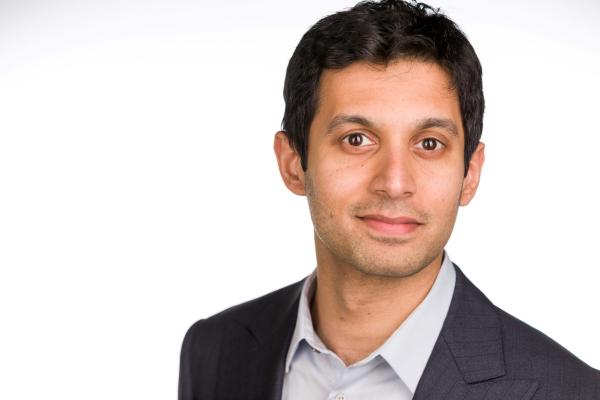 His prior experience includes equity research and due diligence in emerging markets (Middle East and Pakistan). He holds a master’s degree in environmental policy from Columbia University and a bachelor’s in math from Lahore University of Management Sciences.

Abdulla Zaid is a senior economist on Burgiss’s applied-research team, with a focus on ESG in private capital markets. He previously worked as an economist at Fastmarkets RISI. 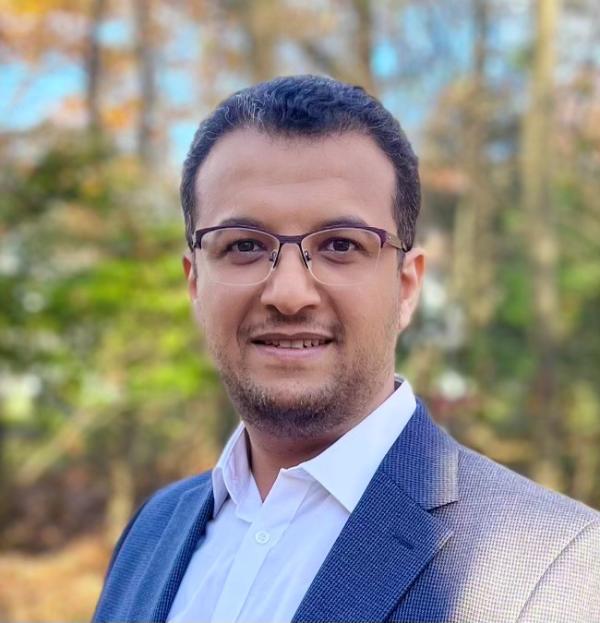