HF Investors and Managers Differ On Impact of New Regulations

Hedge fund managers are a good deal more apprehensive about the consequences of newly imposed regulations in the U.S. and Europe than are their investors, according to a survey newly released by Preqin and discussed in its January 2013 “Hedge Fund Spotlight.”

Forty-two percent of the managers asked said that they believe the recent wave of regulations will have a negative impact on the hedge fund industry. The second most common response (at 35 percent) was that such regulations would have no impact on the industry. This leaves only the remaining 23 percent maintaining that it will have a positive impact.

Of the investors questioned, though, only 33 percent indicated that the regulation will have a negative impact. Though this is still a significant percentage, it is 9 percent less than the corresponding number for managers. 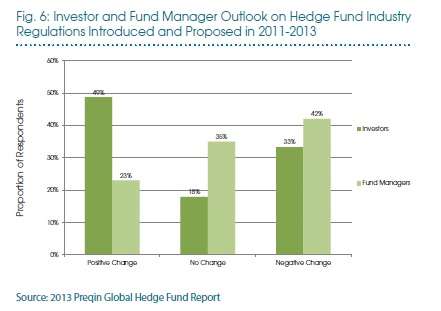 Last year was a disappointing one for the hedge fund industry. As Preqin’s Amy Bensted writes, hedge fund performance lagged that of the broad equity indices in 2012. Nonetheless, “the majority of managers interviewed are optimistic about 2013,” and 62 percent thereof expect the industry’s total assets under management to increase.  Only 11 percent think AUM will contract.

In part, this confidence about AUM may derive from the increasing institutional interest in hedge funds, a topic Preqin has followed since the global financial crisis. In 2008, institutional capital made up a capital weighted average of 45 percent of the industry’s AUM. That year, too, many funds saw net outflows. For the most part, the redemption requests came from high net worth individuals or family offices. The institutions stuck with the industry: by 2011, their share of AUM had risen to 61 percent.

“As of Q4 2012,” Bensted writes, “this had increased further, with 63 percent of a fund’s assets under management coming from institutional investors;’ commitments.”  Largely as a result of institutional perseverance (though individuals and family offices have in the meantime also made a return) the total industry AUM has of late recovered and grown beyond pre-crisis levels.

But, to return to attitudes about regulation, Preqin asked about three specific examples: the JOBS Act, Europe’s impending Alternative Investment Fund Managers’ Directive (AIFMD), and the Dodd-Frank Act.  The JOBS Act was conceived of in a deregulatory spirit, as an effort to lighten marketing restrictions. Only 4 percent of managers see this as having a negative impact. The remaining 96 percent are evenly split, 48/48, between those who expect a positive impact and those who expect no impact at all.

As for the Dodd-Frank Act, the reaction of hedge fund managers to this legislation is almost identical to their reaction of “regulation” in general (see above). Forty-three percent of managers see Dodd-rank as having a negative impact; 35 percent see it as having no impact at all; only 22 percent see it as a positive. The positive they see in it may simply be the presumed improved access to institutions that are “keen to invest in vehicles with some degree of regulated oversight.”

As Bensted says, negative reaction of Dodd-Frank, which has significant extra-territorial impact, comes from both U.S. and non-U.S. managers. A majority of European fund managers asked “believe Dodd-Frank to be a negative step for the industry.”

In August 2012, regulatory authorities from Australia, Singapore, and Hong Kong complained in a letter to the U.S. Commodity Futures Trading Commission that “[a]ffected non-US persons [in the swaps market] will have to comply with two sets of regulations, which may be overlapping and conflicting,” a situation compounded by “the lack of clarity and specificity in a number of areas of the proposed guidance” in the rules regarding cross-border swaps.

Meanwhile, Europe’s AIFMD draws a puzzled reaction. A bare majority (51 percent) of fund managers think it won’t have a significant effect. Twenty-nine percent see it as a negative, the remainder as a positive.