One of the most vexing issues in the hedge fund industry is the relationship between growth in assets under management (AUMs) and future returns. An abundance of anecdotal evidence suggests that smaller managers with great performance attract capital quickly, which dilutes future returns. Further, the recent concentration of capital among large hedge funds has raised questions as to whether this has contributed to the decline in industry-wide alpha. In a recent report, we analyzed nearly 3,000 equity long/short funds in order to get to the heart of this issue. Prior studies have had limited usefulness due to three issues:  (a) the inclusion of backfilled database returns, which seriously distorts the overall results (Pertrac and Barclays); (b) a population of funds across the industry as a whole which includes differing strategies with divergent capacity issues; and (c) a failure to exclude managers or funds below a reasonable AUM threshold (most studies), which results in an impractically small average fund size. By contrast, we focused narrowly on the equity long/short space since these managers are likely to face similar capacity constraints (as opposed to, for instance, macro investors or CTAs). Backfill issues were addressed by including fund returns only from the date when the funds began to report to the database; our studies show that “pre-reporting” returns are 6-8% above “post-reporting” results, which shows the magnitude of the issue. Finally, we grouped funds according to manager since many funds have multiple share classes and since some growth-related issues are firm-specific as much as they are fund-specific. In our study, we divided the universe into firms that managed $50 million to $500 million in equity long/short AUMs (“Small”) and those that managed more (“Big”). The $50 million lower bound was selected to make the sample more representative of an actual emerging manager investment program. The result of the study clearly demonstrates that smaller hedge fund managers tend to outperform larger ones – a conclusion that will resonate with many hedge fund investors: 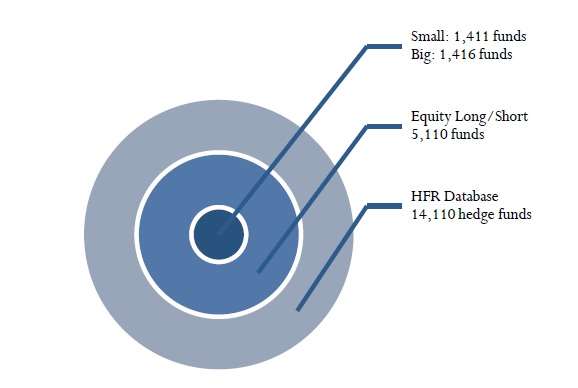 The fund population in the Beachhead study consisted of 2,827 equity long/short hedge funds drawn from the HFR database of live and dead funds. Funds were included based on strategy classifications for fundamental value, fundamental growth and sector specialists in technology, healthcare, energy and basic materials; quantitative-driven, market neutral and short biased funds were excluded.  For each year, the funds were grouped into Small and Big portfolios that were equally weighted and rebalanced monthly. To mitigate backfill bias, the returns for a given fund were only included as of the date it began reporting to the database. In the sample, the number of Small and Big firms was roughly equal. In 2012, a Small firm managed $193 million on average while a Big firm managed $3.7 billion.  Interestingly, average Big firm assets have tripled over the past decade while Small firm assets have remained roughly constant, which reinforces the view that Big firms have had a much easier time attracting capital. Over the past ten years, Small equity long/short managers returned 7.56% per annum and outperformed their larger peers by 220 bps per annum (over the past five years, outperformance was 254 bps per annum). Small managers showed a moderately higher annualized standard deviation, but drawdowns were in line and the Sharpe ratio was significantly higher. The chart below shows the returns of Small and Big managers over the past ten years.

As shown below, Small managers materially outperformed both before and after the crisis, especially during the post-crisis recovery. Somewhat surprisingly, despite somewhat higher beta, smaller firms did not underperform larger ones during the crisis, which may reflect superior risk management or a more manageable capital base.

The remarkable consistency of the outperformance is evident in the following chart. The date on the top row reflects the inception of an investment that terminates in the year on the vertical column; the percentage in the corresponding cell reflects the compound annual return differential of Small less Big over the specified period. For instance, the cell on the upper left shows 2.20% of compound annual outperformance of Small vs. Big over 2003 to 2012. Green boxes show periods of outperformance of Small.

It’s notable that outperformance does not appear to be attributable to rapid or regular changes in market exposure; rather, the beta of Small to Big is quite consistently around 1.1 with stable correlations above 0.95. Consequently, comparable drawdowns during the crisis itself seem to reflect somewhat larger market-driven losses offset by persistent positive alpha. The following chart examines the alpha of the Small portfolio relative to the Big portfolio over the ten year period.  Note that alpha is annualized in the box. The vast majority of outperformance is due to alpha, not beta, which confirms that higher risk taking does not explain the differential.

We also studied the dispersion of returns in order to test the hypothesis that smaller managers are motivated to outperform, while larger firms are likely to be more risk averse. The chart below shows the annual returns of the funds in the Small and Big portfolios with the mean, minimum and maximum fund returns. In virtually every year since the late 1990s, the top performing Small funds have materially outperformed the comparable Big funds.  Interestingly, the worst performing Small funds matched or outperformed the comparable Big funds in the vast majority of years, which supports the argument that Small fund outperformance is not driven by higher symmetric risk taking.

As a final test, we analyzed what would happen if the “threshold” between Small and Big managers was lowered or raised. The chart below shows the differential in returns over the past five and ten years and clearly shows that outperformance of “smaller” managers declines as AUMs increase. For instance, when “small” is defined as less than $1.0 billion, the outperformance relative to larger managers is 1.1% over ten years and 0.6% over five years.

The key question for investors is what factors drive the differential in returns. Three potential factors include:

The study is part of a series of papers on the equity long/short space and is available at www.beachheadcapital.com.