Dollars and Nuggets Part I: Cycles and the Big Picture

Gold as a commodity and gold mining as an industry have both sustained losses of late. Gold stood near $1,800 an ounce for a moment last fall, but by the end of that year it was struggling to stay above $1,650 oz. As I write these words, (mid-march 2013) the price is below $1,600.

What about the equity of the companies that dig the stuff?  That has followed the commodity itself: downhill.  Indeed, mining company prices have fallen more rapidly of late than have the prices of physical gold. Consider Toronto based Kinross Gold (NYSE: KGC). On October 4th its share price peaked  at $11.08. On December 31st it closed at $9.72, and as I write it’s below $8.

One more example: AngloGold Ashanti (NYSE:AU). For purposes of comparability, we’ll again use October 4, 2012 as a benchmark. It closed that day at $33.07 a share, and it has in the meanwhile tumbled with the rest of the industry. Mid-March sees AU at just below $25.

There are firm-specific risks for any mining-company play of course.  AU, in particular, was in the thick of an unpredictable labor situation in South Africa last year.  That meant it wasn’t a great beneficiary of last year’s late summer run-up in the price of gold, and the subsequent fall (you might have expected) should have done it less harm to AU than it did to KGC.

If you had expected that, you were right, though just barely. AU has lost roughly 24 percent of its market cap over a period that saw KGC lose a bit more, 27 percent, of its. This leaves unhappy investors in either case. 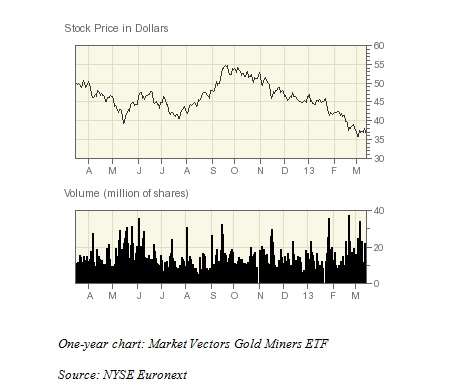 A wise mining-industry bull might abstract from firms and look into the pertinent indexes. In this case, that includes the Market Vectors Gold Miners ETF (GDX), administered by Van Eck Global. As the above graph shows, last year after a late summer run-up GDX was zigzagging around $53. It’s now below $38. There is also a theoretically plausible variant, one Van Eck launched in (November 2009), the Junior Gold Miners ETF (GDXJ), designed to track the gold mining concerns that are still in the exploration and discovery phase.

The theory is that these “junior” miners will either find rich veins of gold as a result of their exploration, or will be taken over by the more senior miners exploiting productive mines, and in either case will be in store for a jump in value. GDXJ has fallen in the same period I’ve been examining: from $25.15 to $16.58. In percentage terms, the GDXJ declined somewhat more than did the GDX.

Let’s step back a bit from the numbers, though. It was last summer that the CME Group’s European clearing house for derivative products, and LCH.Clearnet, each announced that unallocated gold would serve as collateral for margin cover. CME Clearing Europe was in this following the lead of CME Clearing, which had begun accepting gold for that purpose three years before.  Still, gold bulls had some warrant in seeing last summer’s developments as a small but real movement toward a de facto monetization of the stuff.

In mid-October, just as gold began its descent, The Wall Street Journal’s “Brussels Beat” column raised the possibility of the use of gold as collateral for sovereign debts in Europe.

Was that the sort of illusory ‘good news’ that marks the top of a trend or were those symptoms of a secular trend that will re-assert itself once the present cyclical move is done?

Barclay’s Capital strategist Suki Cooper says that Barclays’ gold price target is $1,646. This is an ambiguous datum itself. On the one hand it suggests at least a slight upward move from the present value, and Cooper says “there is scope for gold to gain traction;” on the other it is a downward revision from the last Barclays forecast price of $1,778 and suggests that Cooper doesn’t expect a significant upward swing unless there is as he puts it a “new catalyst.”

My own view: if there is one thing of which we can be certain in the 21st century, it is that new catalysts will come along to renew the attractions of the precious metals, and of gold among them. [Full disclosure: I own no gold or gold-related stocks. I do own a quite modest cache of silver.]

The key secular trend is the displacement of the U.S. dollar as the world’s numéraire. As the dollar drops out of that role, something else will drop in. And gold is the most reasonable bet. More on this point in the next installment.